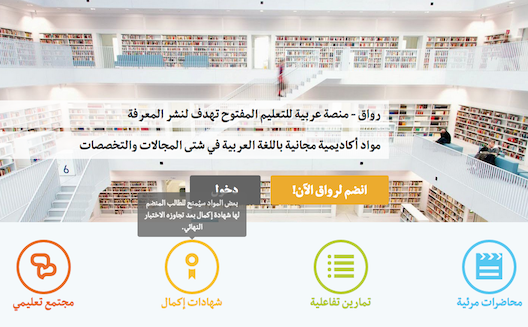 It’s not every day that a leading education initiative launches from Saudi Arabia. But one Riyadh-based company is poised to offer the region something it doesn’t yet have: a fully native, fully Arabic massive open online course (MOOC) platform, with content from local professors.

Rwaq, which launched two months ago, offers courses on everything from social media, art, psychology, to medicine, engineering, and religion, in an attractive, appealing interface that reflects its progressive philosophy and universal principles. With 14 courses and “tens of thousands of users” having joined since its launch in September, Rwaq is on its way to becoming a regional hub for e-learning in the Middle East.

MOOCs, for those who’ve never tried one, are online courses, often free, that are offered to a large number of students at once, and conducted via video lectures and online assignments, as Wamda’s Nafez Dakkak has explained.

2013 saw MIT’s EdX, Coursera, and Stanford’s Udacity grow in stature, and 2014 may very well be the year of the MOOC in the Middle East.

In Jordan, the Queen Rania Foundation has announced a partnership with EdX to debut Edraak, a platform that will offer EdX courses in Arabic and, eventually, original content. In Egypt, MOOC aggregator SkillAcademy (formerly Eduudle) now offers over 10,000 online courses, and will soon offer skillcamps built for specific skillsets. In Lebanon, fledgling startup MenaVersity has gathered experts in the creative community to offer original courses on a range of topics from social media to Lebanese cooking.

The reason that MOOCs are becoming popular worldwide is that they hold the promise of broadly expanding access to quality education. In the Middle East, Rwaq cofounder Fouad Al-Farhan also hopes that MOOCs can reform existing education systems and set a new bar for skill training programs.

The major gap they hope to fill is one for local expertise, he says. Skills necessary for entrepreneurship, like digital marketing, for example, are “completely different here; from the legality, to trademarks, and the success factors. We need content that relates to this market.”

To build “the flagship platform for e-learning in the Middle East,” Al-Farhan and Hussayen have pooled their expertise, passion, and tenacity. Al-Farhan has spent ten years in software development, building Arabic content management systems for major Saudi newspaper and magazines, while Hussayen has worked since 2006 at the Technical and Vocational Training Corporation, one of the Kingdom’s largest educational institutes, where he is now Chief Information Officer. Both share a willingness to bet everything on a new idea.

Al-Farhan especially has reached a phase of life where he’s willing to take on risk in order to make an impact.  After selling his software company, Smartinfo, to management consulting firm Quality Horizons in 2010, he decided that it was time for a change. “After ten years doing custom software development, your knowledge and know-how have been very expanded, but the market requirements are very limited. “It was a good time to evaluate what the right ideas are,” he says.

After reconnecting with Hussayen, whom he’s known for 20 years, they decided that although it would be a tough sell, they wanted to commit to building it. “If we believed in it that much, we thought we should put our money where our mouth is and be the first to take on the risk,” Al-Farhan says.

Knowing that established educational institutions would be wary of partnering with an unknown startup, they began searching - as do many startups - for the right kind of early adopters who understand and support their mission.

Thanks to a law allowing educators to offer community work for free without university permission, they were able to headhunt talented professors who would donate their time, while Rwaq handled the cost of video production and publication on their site.

Those professors include Dr. Maha bint Abdullah Al Sinan, a professor whose PhD thesis was awarded one of the Prince Salman Prizes and Grants for the Arabian Peninsular Studies and Research. She teaches a course on Modernism in the Visual Arts, which Al-Farhan notes is unique. “There are no art schools [here]; it's not a big part of education in Saudi Arabia.”

Having a woman professor is simply natural, he says. Despite the country’s history and continued tradition of gender segregation, only offering courses taught by men would go against the platform’s progressive culture. “There is no differentiation between a woman and man as a teacher,” he says.

When asked about privacy online, Al-Farhan explains that any student wishing to honor the tradition of gender segregation - or simply maintain anonymity online - “has the right to protect his privacy, by publishing [or not publishing] his or her existence.”

Challenges of the MOOC model

What Al-Farhan and Hussayen also have going for them is a realistic approach. They’re well aware of the global challenges of the MOOC model: MOOCs have been criticized for having low completion rates, and most providers acknowledge that fewer than 10% of students complete the course. Completion might not be the best success metric for courses designed to appeal to those who value learning outside of traditional structures. Yet the Rwaq founders acknowledge that, more importantly, an optimal business model for MOOCs hasn’t yet been hashed out on a global scale.

While Rwaq’s courses are free for now, offering premium content for free may not be a sustainable model, if global leaders may be taken as examples. EdX is now expanding into new markets, while Udacity has begun charging fees for those who wish to earn a more meaningful certificate of completion, Al-Farhan points out.

“I don't think any [MOOC provider] has nailed the exact successful model that ensures return,” he says. “You either can do nothing and wait to [imitate] someone who will succeed, or you can jump in yourself and try.”

To that end, Rwaq’s founders are ready to do what it takes - including taking a collaborative approach - to build a platform that suits the Arab market. “We are inspired by the MOOC movement, but we are not attached to its business model,” Al-Farhan clarifies. “We will try to find the right business model that works in the Arab world,” perhaps by “helping others to create their own mini-initiatives.”

“Rwaq is here to prove our capabilities and our vision,” he says.