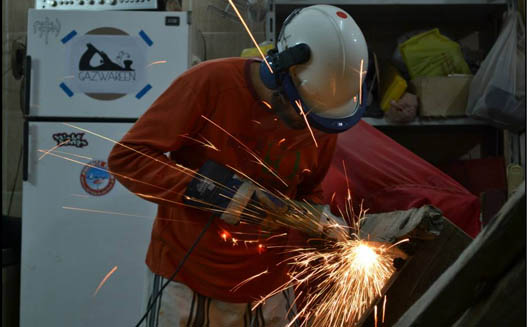 “My passion for wood is something I’ve had for as long as I can remember, and I’ve been making small projects since I was seven,” says Shahir Mikhail, an Egyptian orthopedic surgeon who runs his own handcrafted wood furniture brand, Gazwareen.

Mikhail designs and handcrafts furniture made of driftwood (wood from old boats or beach trees that has washed up on shore). He searches for good driftwood pieces on many beaches on the north coast of Egypt, then stores it for between two months to a few years, before recycling it into an artistic piece of furniture.

“Each piece of wood has a long history and has come a long way. I make new furniture from old wood which gives it a unique, rustic organic look,” Mikhail explains passionately.

The name Gazwareen was originally inspired by the name of a local tree species found all over Egypt, characterized by its hard durable wood. Mikhail uses Gazwareen wood in a lot of his projects. 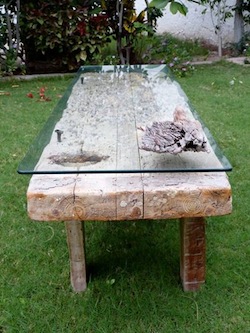 The woodworker learned most of his skills from his father, a doctor as well, from a very young age. His father built and equipped a workshop at their house, in Agami, Alexandria, where he currently makes his pieces. “I was brought up with a lot of wood around, and I lived very close to the sea,” he says, in describing his background.

What Mikhail does at Gazwareen is primarily a form of artistic recycling, but the idea of turning it into a business came to him around eight years ago. When a friend of his was holding an exhibition for his paintings, he put Mikhail's work on exhibit as well. It was a big success: “My confidence grew, [and at that point] I decided to turn it into a business.”

Gazwareen is now thriving, with a lot of orders waiting to be filled, says Mikhail. He also recently hired an apprentice, who is also a friend. Products are being sold online on the Gazwareen Facebook page and the website, as well as through displays at a friend’s gallery in Zamalek, Cairo.

It's not always fun and easy, however. It takes Mikhail a lot of time and effort to maintain his business, as the raw material is not store-bought. Collecting the driftwood is continuous, slow, and sometimes hazardous work, usually done during or after storms. And it does not stop there: “cleaning the wood, dismantling it, and retaining its original weathered look, also takes an enormous amount of effort,” he adds.

“I think the achievement I’m most proud of is that in spite of being a doctor from a whole family of doctors, I had the courage to run such a business and dedicate my time and effort to it,” says Mikhail. In the future, he would like to do more collaboration with other artists working with materials like ceramics, metal, and paint. Going international is also on his list, although he’s not in a hurry.