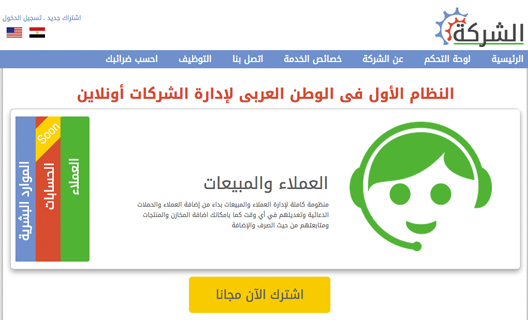 Rarely do entrepreneurs have all of the necessary skills to run all aspects of their own startups; often they excel in some fields and struggle in some others. To address this problem, successful entrepreneur Hazem Tourab has launched another company called Elsherka.com (‘the company’ in English) to offer professional services to digital companies allowing them to run their human resources and accounting departments, and deal with customers.

Last October, Tourab launched three advanced systems to help small and medium enterprises manage human resources, accounting, and customers. Tips are delivered via a monthly subscription tailored to the need of each company. With these tips, companies can avoid having to deal with software designed for these purposes, on which they had previously been reliant. All data is stored in the cloud, similar to Google Docs and Dropbox.

The program can be accessed directly through Elsherka.com, without any software, and has been developed using state-of-the-art Microsoft technology. It has been developed to deal with huge amounts of data and many users at the same time. There are currently two available systems on the website, one for human resource management, and another for customer management, while work is ongoing on the third accounting system which would allow companies to continuously monitor their expenses and revenues, and measure their profits and losses.

Elsherka.com’s model is similar to that of Salesforce, Zoho, and Oracle; however, it is the first of its kind using Arabic, although it can also be accessed in English.

It took me only half an hour to sign up, open an account, and start entering data to try the service, available to a variety of companies based in Egypt, the UAE, or Libya. One is able to choose the language and the currency they’d like to deal with.

There are several features that make using the website very easy and practical, such as the ability to add other users, and to determine the role and position of each one of them in your company.

On the dashboard, one can view statistics of job applicants divided by three categories: new applicants, accepted applicants, and rejected applicants. You can also determine which applicants will be interviewed, manage salaries and bonuses, manage employee reports in terms of insurance, taxes, penalties, and leave days, as well as keeping track of your employees’ birthdays.

The website design is simple, easy to use, and offers a variety of options and boxes to be filled, to fit the needs of each company.

Some people might have reservations about disclosing company data on a cloud-based system that is disconnected as soon as the internet connection is lost, or exposing the company’s data and secrets to the threats of spyware, theft, or even hacking. When we told Tourab about our concerns, he responded that all data are fully secured, but the threat of hacking will always be there, even if one uses a program installed on the company’s computers. From their side, they pledge not to disclose or use any data as they state in their website’s policy.

The truth is that such cloud-based systems save the customer a lot of money needed to buy ERP program licenses whose cost starts at thousands of Egyptian pounds. So why would a small or medium enterprise pay huge amounts of money to buy a program if it can benefit from similar features on a cloud-based program for free?

Demand for his site comes mainly from Jordan and the GCC countries, which explains why he would like to do a marketing tour in Saudi Arabia, Qatar, and the Emirates. “The program isn’t designed to manage projects,” he says. “We might design mobile phone apps in the future that would facilitate communication between managers and employees in terms of leave day requests, office holidays announcements, workflow organization, salary breakdown, or bonuses and penalties monitoring. The future is for human resources,” he adds.