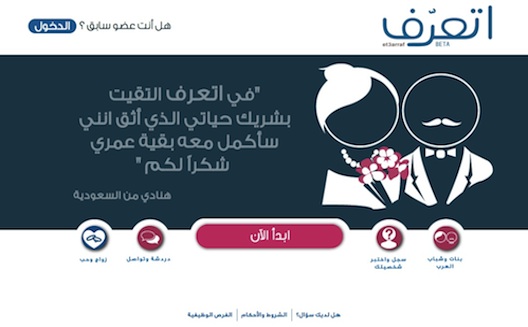 With his French business school diploma and his job at an international consulting firm, Cédric Maalouf was following the same path that most successful Lebanese follow. But everything changed three years ago, when his heart was broken.

Set on finding the right person for him, he signed up for a dating website only to realize there are virtually none in the Arab world. People can opt for either low quality dating websites used to chat anonymously, or social networks like Moroccos AlamJadid, which is designed to help like-minded people meet over common interests.

It’s odd, explained the Lebanese entrepreneur, given how the social pressure can be to find someone after a certain age, and how tricky it can be to meet members of the opposite sex person in some areas. There’s a real regional demand, he said, pointing to the booming business that marriage agencies are doing in Saudi Arabia.

Decided to seize this opportunity, Maalouf moved back to Lebanon to adapt compatibility algorithm-based dating services of the West, like eHarmony, to Arab cultures. Joined by Rakan Nimer, he launched Et3arraf in time for Valentine’s Day 2013.

“It’s not a dating site,” he says, “because dating doesn’t exist in the Arab world. We position ourselves as an online marriage agency.”

Et3arraf aims to help Arabic-speaking thirty-somethings who care about traditions and are serious about wanting to get married meet each other, hence the name Et3arraf, which means to meet in English.

“We put various barriers to entry to make sure we only have serious members,” explains Maalouf, including an extensive psychological questionnaire (created with the help of a Lebanese doctor specializing in marital relationships), the limited number of members one can have access to, and the "progressive intimacy sharing" process.

It works like this: members access their top 30 active matches with anonymous profiles – a pseudonym and no picture. After exchanging some messages, they can send a request to see pictures. Once they feel comfortable enough, they can send each other their contact info to meet in real life.

This process places Et3arraf in opposition of Tinder, the minimalistic American app where users can only see a few Facebook profile pictures and mutual Facebook friends and likes, that’s been making a buzz in North America and Europe with its approach that focuses solely on appearances rather than a complicated affinity algorithm.

Throughout the process, the Et3arraf team provides tips on how to marry online encounters with tradition, including how users can involve their families and how to organize the first offline meeting.

In between Saudi and Lebanon

In the beginning, Cédric Maalouf targeted Lebanon. But, after realizing that this market was too small and that the real need was in Egypt and Saudi Arabia, he changed his service to target more traditional countries like Saudi.

Now, Et3arraf comprises 40,000 users, 40% of whom live in Saudi; another 40% live either in Egypt, Jordan, or Morocco. These users are the heart of the service: Et3arraf counts on what they call ambassador users to voice their opinions, helping to improve user satisfaction. At one point, Maalouf and Nimer increased the average time spent on the website from seven to 24 minutes by adding a top ten of online users, following some users' feedback.

Feedback has been all the more important as the service has so far counted solely on word-of-mouth to expand. The team has paid special attention to building their community; they even sent a wedding gift to the first couple to get married after having met on their platform.

An A-list cast of business angels

This will change in 2014, as the team plans to unveil its first marketing plan thanks to a $150,000 USD fundraising round.

It was back in 2012, when Et3arraf was only an idea, that Cédric Maalouf starting looking for funds to turn it into a reality. After the usual Lebanese startup support organizations all refused to invest in him, pinning their decision to the lack of MVP, Maalouf turned to Lebanese accelerator Seeqnce. He confides that the acceleration was hectic, and did not bring the hoped benefits, but got them to raise their initial capital – $76,000 USD, 50% of which were in services – and put them contact with a few good mentors.

Now, Et3arraf is announcing a prestigious fundraising round, $150,000 USD from Lebanese and Jordanian business angels among which are no less than Hala Fadel, the MITEF founder, Oasis 500, as well as also Lebanon’s Minister of Telecommunications Nicolas Sehnaoui.

The team, which already numbers four employees and makes money from paid subscription from male members and virtual goods, is now looking to hire and expand its members to reach the half-million mark by the end of the year.