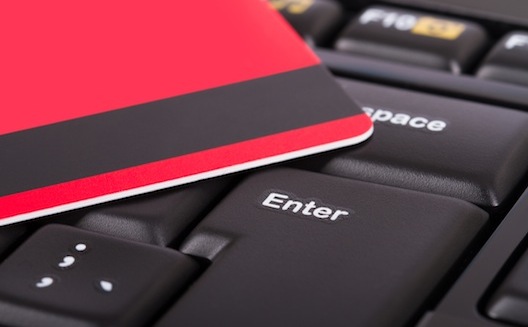 [Update: this article has been edited to add corrections concerning Fast Payment and the FNEM following a discussion with El Amine Serhani Al Idrissi.]

For 14 years now, Moroccan e-commerce has been at the mercy of Maroc Télécommerce, the only online payment service provider (PSP) in the country, forcing online retailers to adjust to the slow pace of innovation and subpar customer service that are common to monopolies.

As of last week, that's all changing, with the launch of a new payment system, PayZone, by Vantage Payment Systems (VPS), two others, AmanPay by M2t, and Fast Payment by the FNEM's president, are set to launch in a the near future.

This sudden shift comes after years of waiting for a license from the Centre monétique interbancaire, CMI, which is entitled by the banks to regulate payment systems in Morocco (not to be confused with the Centre marocain de l’innovation, also known as CMI). Other companies should join the party if we believe the various license's request made to the CMI.

Yet things moved slowly until the announcement of a possible buyout of Maroc Télécommerce (MTC) by this very same CMI. It took that and uproar from e-commerce entrepreneurs for things to finally happen. 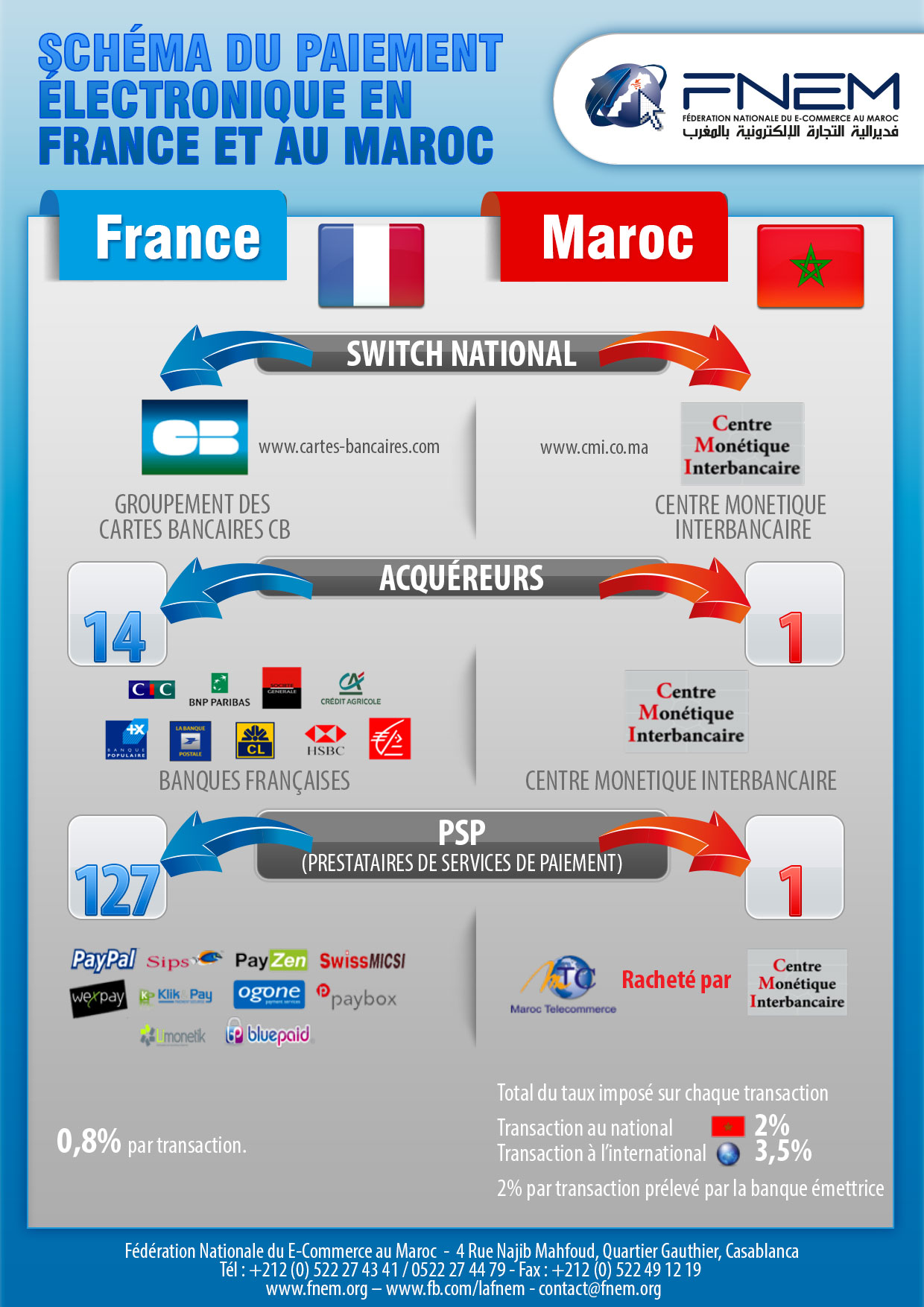 The move hasn't been without controversy, however. While waiting to get a license from CMI, FNEM, , the Fédération nationale du e-commerce au Maroc, went on the offensive, accusing the CMI and MTC of organized monopoly. FNEM founder El Amine Serhani Al Idrissi gathered 2,000 signatures on a petition, organized a sit-in, and finally took the case to the Competition Council, which denied his request, Morocco's Média 24 reported. Contrary to what Media 24 reported, the case is open and going its way, says Serhani Al Idrissi. (It's worth mentioning that FNEM is also dubious in its own right; it has been accused by some of scamming their members with expensive services and throwing lavish events that are less than effective.)

A few months later, the drama subsided, the buyout was canceled, and, in October and December 2013, AmanPay and Payzone respectively received their license.

Today, buyers and retailers in Morocco have three potential options. Here's what to expect from each service. 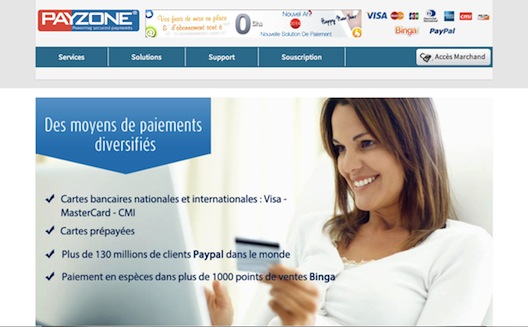 Launched on January 9th, PayZone is, at the moment, the only operational service to challenge Maroc Télécommerce, as Mohammed Bouri, VPS Business Development Manager reminded everyone many times during the press conference. Compared to M2t, which boasts 11 years of experience, and MTC, which has been running for 14 years, VPS seems quite young.

Launched in 2011, VPS was a prepaid debit card provider, which later expanded to offer salary, gift, or fidelity cards, as well as mobile payments and money transfer services. The company now counts 10 employees, a relatively small team compared to that of M2t and its 150 employees.

To differentiate itself from its competitors, VPS is betting on technology and security, Bouri tells Wamda. To offer 3D secure authentication and offer the best technical solution, VPS has worked with a European company instead of developing one in-house.

The company also claims to offer better e-retailer account management software, that automates a few processes like chargebacks, matching transactions with orders, and cancellations, along with a real time reporting system.

Another differentiation point is customer service. "Support is in our DNA," explained the manager, boasting a 24/7 hotline. 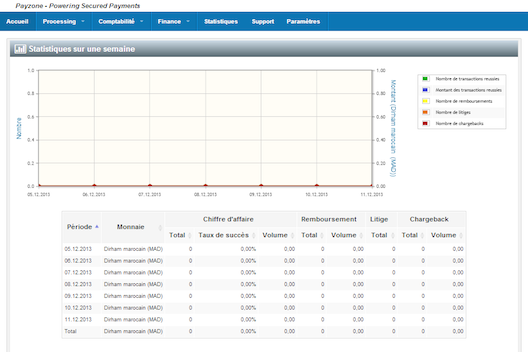 PayZone's payment service will allow customers to pay over web or mobile with national and international credit cards, prepaid cards, gift cards, club cards, or cash, via the Binga service at one of the 1,150 Wafacash agencies in Morocco. E-retailers can also track orders placed via phone, fax or mail on a virtual payment terminal.

This year, PayZone will add installment paying, recurring payments (for subscriptions) and payment on delivery. It will also provide customized integration with websites, or will build complete e-commerce solutions for customers where requested.

Although it offers a formidably different platform than its competitors, it has a couple of similarities to MTC: clients still have to leave a security deposit with CMI to open an account, and it has similar prices, which are evaluated on a case-by-case basis. “We won’t compete in term of prices, because they’re affordable compared to what is done in other countries,” explains Mohammed Bouri. However, unlike MTC, PayZone will not require a monthly fee. 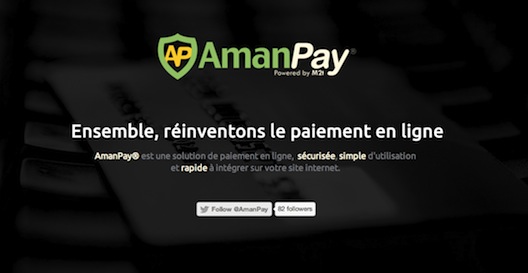 At first glance, AmanPay has all the traits of an innovative startup: a simple, friendly and direct tone, community management – they will reply to all of your questions on Twitter – a sleek website, and a revolutionary mission statement: "Ensemble, réinventons le paiement en ligne," (In English: "Together, let’s reinvent online payment.")

Its manager, Amine Azariz, is also well known for its entrepreneurial background; as the cofounder of Greendizer, an online bill payment platform that was one of Morocco's first major startups, Azariz helped build the Moroccan startup ecosystem.

Yet, it's also not a startup. AmanPay was created by M2t, a company that has specialized in secure financial transactions for 11 years. M2t became popular by launching Proximo Tasshilat, a network of shops where user can pay bills, buy transportation tickets, and recharge their phones. Now, the network has over 1,300 stores in 300 cities and villages.

Today, M2t has 150 employees at its Moroccan head office, and 60 in their French and Senegalese branches. Given its expertise in payment, serving e-commerce was a logical next step, says Azariz.

M2t has developed AmanPay internally, including all of the relevant security features, and has included services like integration in less than 24hrs with e-commerce sites, automated installation of several payment options (including national and international credit cards, prepaid cards, and payment in cash at Proximo Tasshilat stores). It will have similar pricing to competitors.

What sets the company apart is its ambition in customer service. “We want to do things the American way,” explains Azariz, who is inspired by processes at Amazon and Zappos.

With simple integration, that's inspired by Stripe and is "100 times easier that what exists at the moment,” Azariz is looking to attract offline retailers looking to go online, and to convert some of Tasshilat's clients, which include Moroccan e-commerce giants Jumia and Hmall. 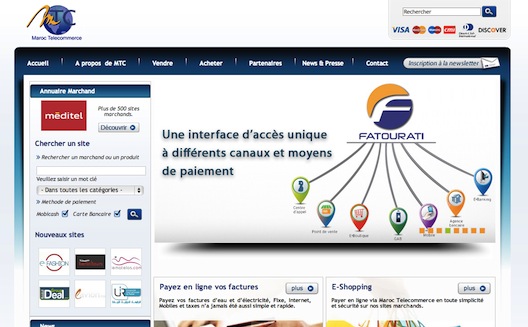 Created in 2001, in partnership with the CMI, following the suggestion of Moroccan banks, MTC was launched as an online payment solution company that initially only offered credit card payment online.

Unlike its new competitors, MTC offers site integration in 48 hours, not 24. One reason is that the CMI needs to validate each case, and MTC needs to verify that the website is compliant with bank and consumer regulations, Gourroum explains (translation: it involves a bit of red tape).

To boost business, and the economy, MTC also offers special low fares and deals to companies in the tourism, education, non-profit, and e-government sectors.

Will the new payment gateways take over from the government entity?

The entrance of two new payment gateways does, at the very least, demonstrate that demand is on the rise. Gourroum confirms that online shopping is growing; today, MTC has over 800 operational clients, with 100 more joining in 2014, and it has enabled 1.3 million transactions between January and September 2013, up 55.9% compared to the same period last year.

Yet, she believes, MTC’s head start, its reputation, and 14 years of experience will protect the brand from the competition. "The MTC brand is a trusted brand, a guarantee that reassure the clients,” she argues, insisting that trust is critical in Morocco, a young market that is still educating customers in the credibility of online shopping.

“This new competition is really interesting, and it will ignite a dynamic that will benefit everyone. It’s a good thing for the market,” she concludes.

We will publish a comparative chart of the different offers. Have you tried PayZone? Share your experience below.