We’re excited to reveal today the name of the first Mix N’ Mentor finalist from Cairo: Codly, a software development company. Watch their submission below!

Earlier this year during Mix N’ Mentor Cairo in April, we announced adding another feature to our flagship mentorship event: the Mix N’ Mentor competition (#MNMCompetition).

The competition focuses on implementing mentors' advice given during Mix N' Mentor, and the lessons entrepreneurs can draw from taking action and tackling their startup challenges heads-on. Mix N' Mentor participants are invited to submit an initial video detailing their startup's main challenge, what they learned during Mix N' Mentor and how they will implement it as well as what metrics they'll monitor to benchmark their progress (more info here). Finalists from each city will compete in the finale to win an all-expenses-paid trip to Silicon Valley, where they will get a week's coworking space, and the chance to meet Googlers right on the Google campus.

To celebrate kicking off another Mix N’ Mentor roadshow in 2014, we teamed up with our partners over at Google for Entrepreneurs to bring one promising startup to Silicon Valley for a week of networking. Over the years, through its various activities in the region, Google for Entrepreneurs has played a solid role in supporting the startup ecosystem, and has been part of the Mix N’ Mentor journey since its inception. 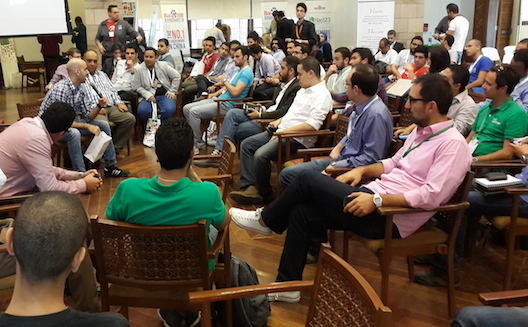 For the MNM competition Cairo edition, we were pleased to have on the Jury seasoned entrepreneurs and mentors including itWorx CEO Wael Amin, Tamkeen Capital Partner Tarek Fahim, and CEO at D-Kimia Diagnostic Solutions Karim Hussein who rated each entry based on what challenge, advice, plan of action, and metrics were laid out in the video (here’s more on what we were interested in).

Having won the Cairo level, the Codly team will have until December 2014 to submit a final video in which they will feature progress, lessons learned, and what they plan on using their time during their trip to Silicon Valley. They’ll be competing against all other Mix N’ Mentor city finalists.

The competition will run through the year at both city and roadshow levels. Each Mix N’ Mentor event will have its own city run, where attendees are invited and encouraged to participate by:

Amman, you’re next: read up on the competition here!