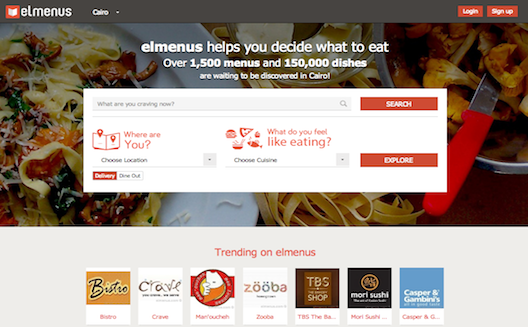 Egyptians are increasingly combining their love of food – the product on which they the majority of their yearly incomes – with the surging trend in all things digital. Entrepreneurs have responded to this trend in force, jumping to launch more and more apps and services to satisfy the needs of the fast growing group of Egyptian internet and smartphone users.

Online food ordering and delivery services like Otlob in Egypt and KSA, and Talabat in the Gulf, are on the rise in Egypt and the region, mirroring sites like Yelp and GrubHub in the US. Technology is also creeping into the Egyptian restaurant experience, as Swipe N Tap, an interactive device that links diners with kitchens and management.

Elmenus, a “food discovery platform,” is a major contender on this scene. Active since June 2011, its latest offering is an iOS app launched about a month ago that received more than 15,000 downloads in just two weeks, and which for a while topped the App Store’s most-downloaded list.

To help users choose among Cairo’s dizzying array of restaurants, Amir Allam decided to create a service to combine restaurant data with full menus, in order to provide users with increased access to types of food available, as well as basic information like location, opening hours, etc.

According to Allam, the platform attracts around 400,000 visitors per month who access menus updated on a quarterly basis since the platform was launched.

Allam has not relied on marketing campaigns on social networks; he attributes the platform’s quick spread to “its rapid circulation among users,” in addition to its search engine optimization. “Elmenus is often ahead of other results in searches for restaurants on Google. This helped the website appear in searches for data on restaurants which then boosted the spread of the app,” Allam adds.

Allam says: “We launched Elmenus in the wake of the revolution, and the timing was very important in spreading the idea among restaurant-goers who [were hesitant to go out] because of the unstable situation, so Elmenus provided them with the opportunity to choose their favorite foods and order them home” using delivery services.

“Once the situation started to stabilize, we started noticing that the platform had become a comprehensive reference for restaurants in Egypt. Our idea marketed itself,” he says.

Users can upload photos of dishes they’ve had to the site, and provide comments to restaurants on their experiences. Restaurants can post menus with pictures, prices, and available sizes of dishes.

Allam has remained in financial control of Elmenus since its creation. At the beginning, he relied on investment from friends and family, as well as his own savings, until the project began taking in enough revenue from ads on the website (bought by companies like Molto Egypt, Chipsy Egypt, and Pepsi Egypt) and subscription fees from restaurants.

Subscription fees imposed on restaurants are determined in accordance with the additional advantages they request. “Restaurants can target specific segments of users by geographic location or the frequency of visits. The more complex the restaurant’s marketing campaign on the website, the higher subscription fees,” says Allam.

According to the founder, Elmenus combines on its platform now 40 advertisers with thousands of dishes from 1,500 of the most famous restaurants in Egypt, such as Mori Sushi, Bistro, and Chili's.

The next course for Elmenus? Once his business model stabilizes in Egypt, Allam seeks to expand to other countries in the region, notably Saudi Arabia and the United Arab Emirates.