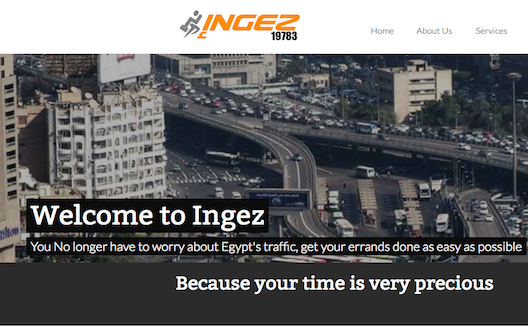 It’s not enough for Egyptian entrepreneurs to try to reduce the number of cars in Cairo’s congested streets; they are also trying to provide services that help citizens with their errands. Mashaweer, for instance, was established in March 2012 to provide delivery and receipt services. That includes things like grocery shopping, getting official papers from government organizations, and even walking pets. Now, a year later, Ingez has launched, providing a different take on delivery and reception services.

‘Ingez’ is an Egyptian-dialect Arabic word that means speed in completing tasks, which the company defines as its competitive edge. It relies on its speed to gain the trust of its customers who can expect to have a service completed immediately and on demand without the need for any prior reservations or appointments, which is not the case with Mashaweer.

Walid Rashed, founder of Ingez, doesn’t see the competition between his project and Mashaweer as something to worry about. “The Egyptian market is broad and customers are hungry for services that facilitate their daily lives. I benefited a lot from Mashaweer’s experience and studied their steps well before launching my own project. A company’s success can inspire another and motivate it to excel and be different,” he explained.

Ingez received an investment last month of more than a million Egyptian pounds (equivalent to $140,000 USD) from Shekra, an organization which supports startups by offering them financial, educational, and legal solutions as well as mentorship and follow-up.

Rashed’s prior study of the Egyptian customer and the Egyptian market’s nature may have contributed to the company’s early successes. What he learned enabled Ingez to focus on building trust with its customers in terms of products’ receipt and timely delivery. The company adopted a slogan meant to convey speedy delivery and which loosely translates into “the road’s distance.”

“Time is a fundamental value in the lives of people nowadays. That is why I decided to send a message through my project to the Egyptian society as a whole on the importance of respecting this value,” says Rashed.

Rashed wants to convey the impression that Ingez’s services are available at any time. “My clients don’t need to coordinate with customer service before making an order. All they have to do is call 19783 or sign up on the website to start moments later tracking the progress of their order through the Online Tracking System which is the first of its kind in Egypt to enable customers to track the location of Ingez’s representative by GPS,” says the entrepreneur.

So far, Ingez has attracted 12,000 registered customers to the website, more than 22,000 Facebook fans, and more than 4,188 Twitter followers. Rashed attributes this success to Injez’s offering services upon clients’ request any time from 9 AM to 8 PM while always maintaining its promise of punctuality.

Injez is a startup that itself seeks to help other startups. The company works to act as a liaison between companies of all sizes. It offers companies delivery services for their customers by allowing them to create corporate accounts on Ingez. Settlement is later conducted through either cash payment or by direct deposit to Ingez’s bank account.

In this context, Ingez works with Kidzania, an ‘edutainment’ park, CairoSitters, a babysitters agency, and e7gezly, an online ticketing platform in Egypt, among others.

Rashed works with a team of 20 people, including delivery and administration staff. They manage a team of 15 motorcycle delivery people for daily operations. To guarantee the punctuality Rashed limits his operations to 100 orders per day.

Orders on Ingez include all daily tasks that the company undertakes to handle on behalf of its clients, including grocery shopping, sending gifts, buying medicine, making a doctor’s appointment, paying bills, obtaining official papers, and simply picking things up that clients may have forgotten during the course of a busy day.

And although Ingez’s services are still limited to Cairo, the company’s customers in the city can send things to the various governorates, and people abroad can ask Ingez to deliver their gifts in Egypt.

Even though the future seems bright for Ingez, Rashed harbors concerns related to hiring. The work’s nature requires employees who can work hard both physically and mentally; people like this have been difficult to find.