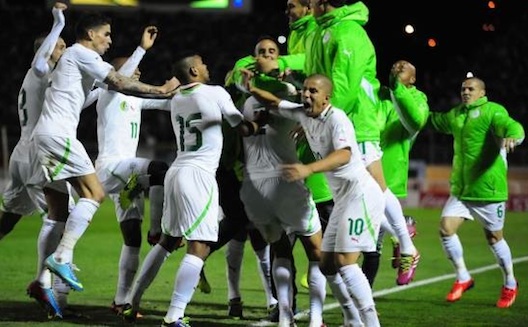 Well, it didn’t happen. We didn’t win the World Cup. We didn’t even make it to the quarter finals. But we did accomplish something huge: we made it to the second round for the very first time. We also became the first team from Africa or the Arab world to score four goals in one match during a World Cup. We even put Germany against the ropes, one of the teams favored to win it all, who had to wait 120 minutes to win.

A large number of the players on the team live abroad – some were even born abroad – but that doesn’t make them any less Algerian than the Algerians living here.

Algeria must find a way for its diaspora living in the U.S., Canada, Europe, and even Asia to participate in the economy. Algerians from abroad are an intellectual élite that need to be tapped in to develop the educational system, the scientific research sector, as well as general economy. These emigrees could be brilliant mentors for the local youth, and can help transfer technology and knowledge to Algeria. There are Algerians in San Francisco, Paris, and Montréal who are more than willing to help, as I’ve had the chance to witness.

But it's not a one way street. Local entrepreneurs should reach out to the diaspora with questions, and involve them in their initiatives. Algerian executives at Intel, Google, or even Cisco can only bring good tips to the local ecosystem.

Also, the government should draft a plan to attract this diaspora, in a way that doesn’t necessarily require them to come back home, by simplifying the process through which the diaspora can create links with local youth, or even start a local business.

Foster and support the youth

The Algeria national team was able to break a record because it relied on people who are, for the most part, under 25 years old. The government and the corporations, as major stakeholders of the economy, must encourage initiatives led by young Algerians, and make sure the youth is qualified and confident enough to develop the country’s economy.

Believe in your vision and strategies, but stay open to feedback

The national coach has been sharply criticized by the media and the public about his tactics. Despite this, he didn’t budge regarding his strategy and selection, holding tight to his vision. But still, his stubbornness didn’t prevent him from taking into account some opinions after the team lost its first match.

Each institution, company, leader, or community must decide on a vision and a strategy, and stick to it, but they should not shut themselves off from other people’s opinions. They have to know when it’s best to consult people or ask for mentoring.

Do what you’re good at, but don't be afraid to something new

During the first match, against Belgium, the team had a very defensive game. This can prove efficient for other teams, but it was a failure for Algeria. For the second game, the team went back to a strategy that it's more comfortable with, focused on attacking. Even, if this strategy generated some defensive errors, it proved successful.

Each player of the ecosystem must start by developing what they’re good at. We have to focus on what we already have, in terms of skills and society, before moving to new things.

There’s no miracle recipe, but these are good ingredients. The national team proved that it’s not about winning every time. Rather, it’s about knowing which path to take to set yourself apart.