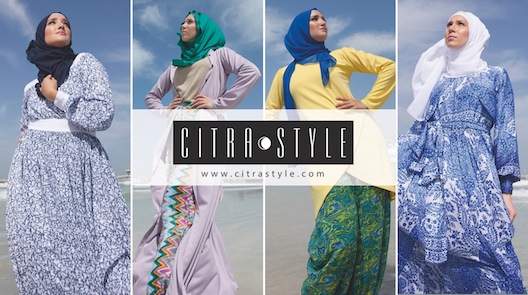 The world is increasingly recognizing the tremendous potential of the global Islamic economy — one that encompasses diverse sectors including but not limited to finance, food, and fashion. In 2012 it was valued at over $1.5 trillion USD and is poised to double by the end of the decade. In the same year the market for Islamic fashion alone was valued at over $200 billion USD (based on global Muslim consumer spend on clothing and footwear) and is expected to reach over $300 billion USD in 2018. With the recent launch of the Islamic Fashion Design Council in Dubai it is obvious developments in this market will continue to draw a significant amount of attention. 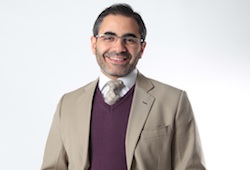 Recognizing the evident consumer need and the tremendous commercial potential of the Islamic fashion market, one homegrown fashion label, Citra Style, aims to put modest fashion on the map. Launched in January 2014 by Muhammad (right) and Habibah Chbib, the brand caters to modern and style-conscious Muslim women worldwide who choose to wear the hijab, and aims to be the world’s premier online store for modest fashion.

“Citra Style was created for the modern and fashion conscious women of faith,” say its founders. “Our brand represents a unique fusion of cultural heritage, religious belief, and current runway trends, carefully designed for the Muslim woman of grace and honor.” Catering to a faith-based consumer segment, the brand espouses a distinct set of tenets and values, as evidenced in its name: Citra in Arabic means protection, shelter, and modesty.

As CEO, Muhammad is the consummate e-commerce aficionado, boasting rich innings in the region in his former avatars as the founder and CEO of desado.com — the Middle East’s first online design destination — and as the CEO of Sukar.com, the first online private fashion shopping club in the Middle East, which he then sold to Souq.com. He states matter-of-factly: “I’ve been in the e-commerce realm for several years and I came to the conclusion that if you just trade items online, you simply don’t stand out. In the Middle Eastern e-commerce space right now, price is the only differentiator.”

The desire to embark on a different online retail business prompted Muhammad to identify a distinctive product with global appeal. Modest fashion was an idea that he and his wife, Habibah, had always considered over the years. “There’s nearly two billion Muslims around the world,” cites Muhammad, “name one global brand that stands for Muslim fashion. None, right? That is the need that we decided to address.” Habibah continues: “Both of us are originally from the region, raised in Germany, and we understood the needs of countless Muslim women living in the West who want to honor their faith and still be fashionable. I’ve personally found it challenging to put together a complete outfit without visiting multiple stores. I knew it would make my life easier if there was a one-stop fashion shop for modest clothing.”

Given the confidence Desado’s existing investors had in Muhammad, bringing them on board for Citra Style was a smooth process. The Chbibs spent the first quarter of the year working on an initial sample collection while fine-tuning their various processes: from design finalization, fabric sourcing, and tailoring to their external customer-facing processes.

Operating a very lean business model from the start has enabled the young business to find its feet and be responsive to its key consumer segment. Muhammad informs me: “Our main monetary investment is in the fabrics we purchase and the fees we pay to our outsourced designers and tailors. We keep as much of our processes in-house as possible to ensure efficiency and quality. Right now, we have a few contracted designers and tailors but soon we will move design and production entirely in-house.”

Habibah (below) oversees the design aspect and works with Citra Style’s in-house designer to research and identify the key styles and trends from the latest runways shows in London and New York. “We turn ideas around very quickly. As soon as we have an idea for an item, we finalize the design and production of the sample piece in a day or two, get it photographed in-house and advertise it on the site. The whole process takes up to a week or less.” In Habibah’s view: “This way we are always surprising the Citra Style woman with new options.” 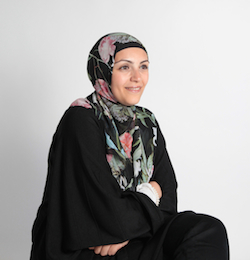 Muhammad points out: “We consciously chose not to produce items in bulk as stocking them would have become an additional cost and potential liability in the event the items did not sell out. Everything we produce is made-to-order for the customer and the benefit is that she can customize the design. Usually, orders are ready for dispatching within 48 hours and reach our customers within a week.”

In a matter of months, the label has gone from strength to strength. Since May of this year, Citra Style has delivered over 1,000 orders to more than 25 countries from its warehouses in Dubai. Returning clientele who have made additional purchases on the site at least once in the last six months is at 20%. Moreover, Citra Style boasts a very low return rate of 10%, over half of which are owing to size exchanges, compared to the fashion industry return rate norm of approximately 40%.

Creatively reaching out to prospective consumers proves instrumental to Citra Style’s rapid elevation as a global brand for modest fashion. Habibah elaborates: “We consciously work with influential Muslimah bloggers and Muslim media portals so that we can reach out to all those women seeking modest fashion that reflects their faith. Citra Style has been involved in a host of Muslim community events in different parts of the world. Soon, we plan to organize our own modest fashion shows in our main markets.”

Earlier this year, Citra Style held its inaugural Modest Model Casting competition for its 2014 Summer Collection. Perhaps the first global Muslim model casting contest of its kind, over 250 contestants vied for top spot, with finalists attracting thousands of votes from fashion-savvy Muslim women worldwide. Given the contest’s phenomenal success, Citra Style recently launched its second edition to select the face of its soon to be launched Fall-Winter Collection 2014.

The Chbibs are clear that they intend Citra Style to be perceived as a global Muslim fashion label and not simply as an e-commerce company. “We sell our products internationally and focus our marketing spend on strategic markets in North America and Europe,” emphasizes Muhammad. “The numbers are telling in themselves. 50% of site traffic is from the US; about 25% is from the UK; 10% from Canada, Germany, and Australia and the remainder is an assortment…Trinidad and Tobago, Singapore and Denmark, among others.”

Muhammad is buoyant about Citra Style’s future: “We receive a great deal of investor enquiries. In the long-term however, I believe it’s crucial to have a strategic partner, ideally someone from the region who is Muslim or believes in modest fashion, has experience in either fashion retail or production, and boasts a significant network.” So what’s next? “Going forward, we plan to get closer to our major markets by setting up factories in North America, Europe and Southeast Asia,” he explains. “Setting up retail stores or retail partnerships in these markets is also on the agenda. Currently, we’re identifying our target communities in North America and Europe and establishing the right retail partner in these markets."

Natasha D’Souza is passionate about innovation and entrepreneurship, especially social enterprise. After working in corporate intelligence and policy analysis roles in Washington D.C., she moved to Dubai a few years ago and finds inspiration in the city's dynamic arts, design, and start-up scenes. You can reach her at natashadsouza (at) gmail (dot) com.