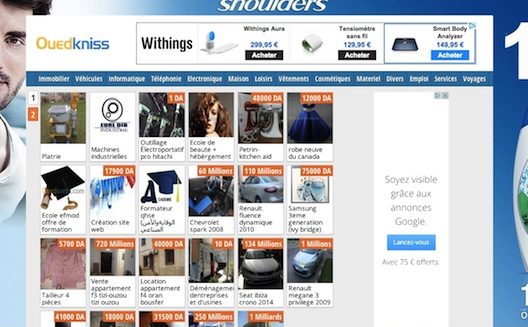 The story of Algeria’s eighth most visited website started eight years ago when police showed up to shut down a suburban street market. For decades the market would regularly pop up on a street called Oued Kniss in the Algiers suburb of Kouba. People would buy, sell, and swap anything they could imagine, from television sets to carpets. “It was really nice,” remembers Mehdi Bouzid.

Like many other teens in Algeria circa 2006, Bouzid and his four friends, Hichem Soudah, Amine Benmouffok, Ahmed Bouaouina, and Djamel Eddine Dib, dreamt of starting a blog. They had already had in mind the idea of a classified platform for their friends, so, when Oued Kniss’ souk closed, they decided to hurry their plans along, get set up in a nearby cybercafe, and create their website. In homage to the street market that they felt played a huge part in Algiers’ identity, they called it Ouedkniss. 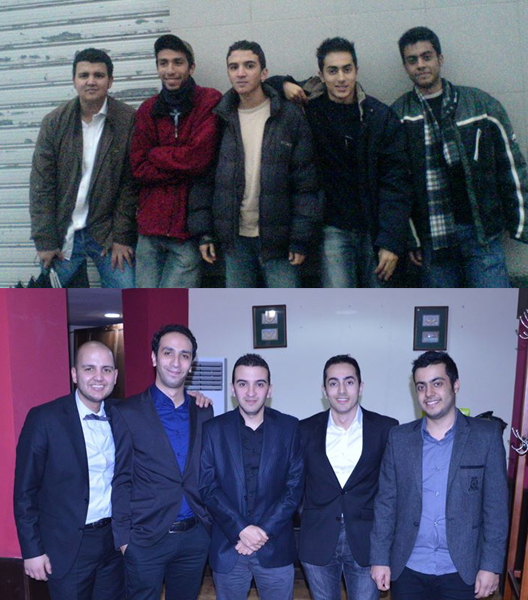 At that point, they weren’t even thinking about making money, recalls Bouzid. “In 2006 there weren’t many Algerian websites. There were just a few Skyblogs (a blogging platform popular at the time among French-speaking users all over the world), forums, and a couple of information websites. All we wanted was to leave our mark on the internet.”

From word-of-mouth to online advertising

In the first year, the website got no more than 20 visitors a day, plus a handful of classifieds posted by their friends. However, gradually the word spread. In 2007 the team was invited to one of the first e-marketing events in Algeria, and Ouedkniss hosted 2,000 visitors in one day. “This was a record for us,” remembers Bouzid. 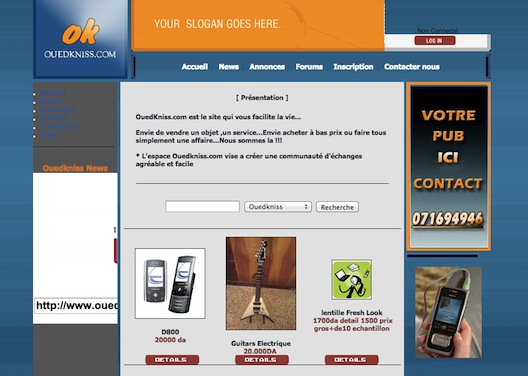 It was upon entering university that the five friends saw a real growth in numbers; each of them could easily convert hundreds of students. At that time students were the ideal target, as they were interested in the possibilities offered by the internet and they wanted to try something new. Quickly the word spread beyond their universities and the site became a phenomenon.

After three years of developing and tweaking their product, and letting Algerians make Ouedkniss their own, the five friends decided to step it up and began advertising the website, both to internet users and to those who were yet to get online. In focusing on online ads and Facebook to promote the service, they differed from their Moroccan counterparts who invested heavily on TV and billboards to get non-internet users to join. “You can find Algerians who don’t even have an email address or use the internet, but use Facebook, so we decided to target them.”

In no rush to monetize

As students who were more interested in building something than in becoming rich, the five friends took their time before monetizing the website.

In 2009, they launched their Store offer, a monthly subscription that gave professionals an online store with a pre-defined number of classified ads. They met some resistance at the beginning with top users, who were not ready to pay for something they used to get for free. So, the team dropped the prices to 1,000 Algerian dinars for a 100 adverts, (10 DZD was $0.12 USD at the time). “It was so cheap, people couldn’t refuse it,” he said.

By the end of 2011, the startup had only had 100 professional sellers, but the beta was deemed successful, and so the team moved on, and hired a sales rep to reach brick-and-mortar shop owners in their own shops. In a year, the number of Ouedkniss Stores increased six times.

The Stores were, of course, not the only monetizing route the team explored. In 2010 they began to sell ads on the site. “It took us a long time,” laments the cofounder. “I tried [managing ad sales] myself from 2009 to 2010, but I gave up,” he continues, explaining that advertisers didn’t get the internet. “They were old-fashioned, and thought the internet was not serious enough.” Now, the startup has mostly outsourced this job to a few ad networks.

Things are better now, he admits, thanks to the arrival of a younger advertising staff, and an internet boom, but advertisers still don’t get web culture. He points out that most still refuse to do CPM campaigns (where advertisers pay by units of 1,000 views) and insist on paying by the day. But, he says, despite those difficulties, the website has been profitable ever since 2011.

After eight years of patience, and persistence, Ouedkniss now boasts 250,000 visits a day, and is the first Algerian website in the country to gain such numbers. Looking quickly at neighboring countries – with international and major players merging in Morocco, and Tunisia being invaded by Schibsted’s Tayara – could anyone have foreseen self-funded Ouedkniss remaining independent for so long? “We’ve had offers, mostly coming from the Middle East back in 2008,” says Bouzid, “but we don’t like the idea of having investors, we have our vision of what Ouedkniss could be in 10 years.”

The five friends have already started to diversify, with their Travel section, where users can now book trips online, and the launch of cars-dedicated website Autobip.