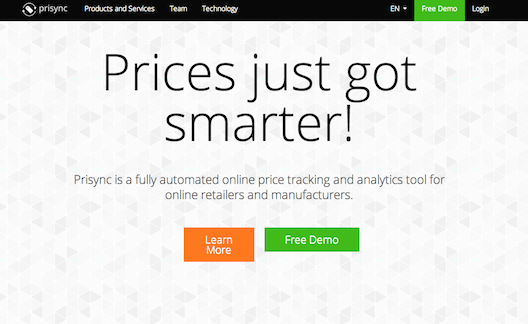 The growth of e-commerce has brought with it a surge in the choice of products and suppliers at customers’ fingertips. It has never been easier for shoppers to browse around for the cheapest deals, whether buying an iPad or a holiday. But for e-commerce companies, keeping track of competitors’ prices for an array of different products can be a time-consuming process.

This was an issue Burc Tanır, CEO of Istanbul-based Prisync, noticed when speaking to friends working in the online shopping sector. “I had smart friends doing terribly manual tests including price tracking of competitors and I saw people doing this as a full-time job and thought it was a waste of human resources,” said Tanir. “There was a very solid opportunity in the market for a solution to this.”

Tanir and his team have been committed to building Prisync, an online retail price tracker, since February 2013 and launched the initial prototype in early September 2013. The company received interest in the “very basic” prototype and started to market it to companies in Turkey, eventually expanding it to customers in Europe and the Middle East.

In May 2014, the company received $200,000 USD through two angel networks in Turkey (Galata Business Angels and BIC Angels) and have, to date, expanded their customer base to more than 25 companies worldwide. Prisync has closed deals with companies like Boston Consulting Group, electronics retailer Media Markt, Egyptian online store Yashry and Italy-based baby-care group Chicco.

At present, about half of Prisync’s customers are in Turkey but Tanir sees the Middle East as a major expansion opportunity and is running trials with several companies in major markets such as Saudi Arabia, the UAE, and Egypt. Companies carrying out demonstrations on Prisync in the Middle East include Saudi Arabia-based online electronics retailer Extra and Emirati e-commerce sites Alshop and LetsTango.

The Middle East has fewer small e-commerce companies than other regions, leaving a higher market share for the larger companies, which Prisync sees as its potential customers. “There are not many small e-commerce sites as it requires heavy investment to start up in the Middle East because of logistics problems,” said Tanir. “Since there are big customers with big pockets and no small competitors, this is the market we love. Normally very, very, small companies are stealing the market share so big companies are lacking the budget for tools like ours.”

A lack of presence from e-commerce giant Amazon in the region also helps other large online shopping sites establish themselves in the market.

Tanir’s ultimate ambition is to disrupt New York-based consumer information giant Nielsen, which he believes has been slow to catch on to the growing trend of online shopping.

“[Nielsen’s approach] has worked on conventional markets because they have superb expertise in offline retail and defined the needs of the market,” said the Prisync CEO. “We are imagining the same impact online through building this software.”

Prisync initially started by asking a potential customer to name, say, 100 products and 10 competitors to be researched. Then the team would manually match the products on all the competitors’ websites and develop a code for the websites to track prices.

“Now we have scaled the system so it doesn't matter which website needs to be tracked. We can now scrape incremental changes to pricing or data from any given online shopping website – the prototype algorithm does this automatically,” said Tanir. On top of the basic data, Prisync also includes an analytics service to present the data at different detail levels and provides Excel and PDF reports.

The biggest technological challenge over the next year is fine-tuning the matching of product descriptions to increase the amount and accuracy of data than can be gathered. Prisync also aims to expand the company further into Europe and North America and, Tanir says, the company will require additional funding around this time in 2015 to achieve this.

Alexander is a Dubai-based business journalist. Before moving to the region three years ago he worked for several global business publications in London.