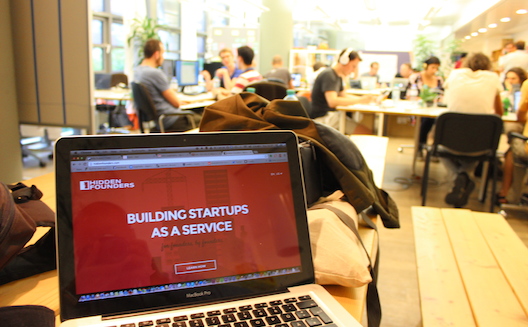 The name Yassine El Kachchani should sound familiar to Wamda’s readers. He's one of the earliest Moroccan entrepreneurs, and his first venture, LaCartePlz, a food delivery platform, had all the Moroccan techies excited. But the entrerpreneur had to pivot. He launched Doofry, a B2B version of the platform that enabled mostly European restaurants to create their own delivery platform. Again, a failure.

The Rabati, who became in the meantime a founding member of the StartupYourLife community, decided to try a model he thought was a better fit for the maturity of the Moroccan startup scene. He launched, with two co-founders, three projects at the same time, the aim being to see which would generate revenues. A year later the team chose to work solely on a pivot of one of the three ideas: Hidden Founders, an agency acting as a “temporary CTO" for EMEA startups.

To discover what keeps El Kachchani motivated after a failure and two pivots, Wamda caught up with the entrepreneur to talk about his new project.

LaCartePlz’s failure, and its pivot were tough, admits El Kachchani. The entrepreneur went through a classic period of depression which lasted four months, but couldn’t stay away from entrepreneurship too long.

“Entrepreneurs who make it in one-shot are outliers,” he insists. He, on the other hand, is one who has learnt from his failures, both on the business side - he focuses more on sales and distribution than features now - and personal. “Now, I lead a normal life,” repeats the entrepreneur, who has started working out. “You start stressing way less, and this impacts positively your decision-making,” he explains.

When the young man decided to start over, he decided to do so with two co-founders, Adil Haizoune, CTO, a man with 10 years of experience in IT services companies, and Nabil Belmezouar, VP of Business.

“Now, I understand why YC refuses solo founders,” he explains. “[Having co-founders] has a huge impact on what I do. Having two co-founders, means having two brains, two people to share the expenses; it’s liberating, it takes off some stress, it enables you to take a step back from what you’re doing.”

And Hidden Founders was born

The three co-founders were sure that if they tested three prototypes, “one project will call on them”. So they tested WeUnikorns, an online fashion brand for women; elevengo.com, a football scores prognostic game; and Hidden Founders, an offshore IT service company for startups.

In June of this year, even though WeUnikorns’ first mini-collection was ready, the team decided to focus on Hidden Founders, after two clients signed. They went to Europe to meet potential clients, and to prove to them they weren’t your usual offshore freelancers agencies.

There, they easily validated the projet, and managed to create trust, thanks to their experience, their portfolio, and the fact that they speak the same language as entrepreneurs: startup slang.

After a month on the road, they drafted 12 quotations, but none lead to an order. “In Europe, it’s like Morocco: most founders are broke, they don’t have a prototype, nor an MVP, nor seed money,” El Kachchani explains. “They’re still looking for a CTO to pay in shares. They don’t want to put too much money into a prototype.”

Of those 12 startups, four really got the attention of the three Moroccans. “It was a shame to have such good matches, to believe in the startups in front of us, and not be able to do anything, just because of money,” he laments. So they’ve imagined a model to become selected startups’ “temporary CTOs, and this for a lower cost. “We’re here to build the MVP that will help them validate their hypothesis, and get the traction that will enable them to convince a CTO, an accelerator, or even seed stage VCs.”

The three friends, inspired by the leasing model, put together a billing model custom-designed for startups. They only ask for 15% of the quotation upfront, and then asked for monthly payments over an 18 months basis. At the end of this period, they get the code source of everything Hidden Founders created for them.

More over, the three Moroccans know that entrepreneurs need an exit. Those who’ve decided to avert their projects the first semester, can terminate the contract without having to pay the last 12 months. Others have to go all the way.

A new model of offshoring

To allow this billing model, the startup decided to create prefabricated building blocks. “We prepare blocks of code before the missions, to reuse them a bit everywhere,” explains the cofounder, “this allows us to cut our costs by 40,” to manage social sign-up, and referral, for example, clarifies the cofounder, which gives them more time to focus on creating something. “There are lots of functions that repeat themselves, this is why CMS like Drupal and Jumla exist.” However, those CMS's are very specific and are time-consuming if your product doesn’t fit their offer exactly.

The three friends also share resources. Each developer will work with three startups, which will prevent any one developer from having a quiet period. To do so, Hidden Founders will need several startups at the same time, which is why they want to switch to a "batch" model of seven startups, similar to what accelerators do.

Finally, the team, who knows the Moroccan offshore scene well, managed to recruit great developers that were tired of doing the same tasks all over avain, and not getting any value from their work, in order to maximize the quality and the productivity of Hidden Founders work. Cherry on the cake: the Hidden Founders team gather a few successful Moroccan entrepreneurs to mentor the selected startups, including Avito’s Eyass Shakrah, Enigma's Hicham Oudghiri, and Hmizate/Hmall's Kamal Reggad.

Interested startups can apply until the end of October..