The articles mentioned below were all originally posted on firnas.org

According to a VISA study of the MENA’s internet usage, released in June, the Arab region represents the fastest growing ecommerce sector in the world, with an estimated 45% yearly growth. Within that, the Kingdom of Saudi Arabia has topped their charts as having the largest expansion in recent years.

With a population of nearly 29 million people and an internet penetration rate that matches that of China (at 45%), this is hardly surprising. With 39% of adult internet users making purchases online, the internet sector for the Kingdom was worth $9.9 billion in 2010 and is set to expand to more than $28 billion by 2016.

When it comes to what Saudis are buying online, the items are varied. From fashion to consumables the market is similar to other GCC countries; however, recently there has been a rise in the number of sites dedicated to items that might traditionally have been seen in a souq, or more recently, supermarket setting.

Muhammad Arrabi, the CEO of internet holding group N2V, told Wamda that there has certainly been a rise in the demand for locally manufactured products. “Buyers do have a world view,” he said, “but they are also keen for products from within Saudi.” However, when it comes to penetrating the Saudi market, Arrabi points out that people would be mistaken to lump the Saudi taste in with the rest of the GCC. “Saudi has a huge population with multiple, semi-independent, subcultures," says Arrabi, "Each with their own preferences, habits and spending levels." 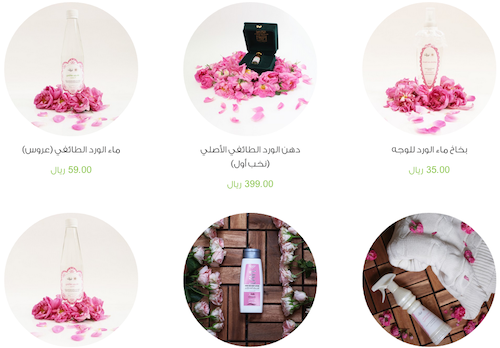 An array of rose products.

Nora Al-Harthi recently took her company Wardastore, which sells rose products from Taif, online. Inspired by a tourist from the UAE, who said she missed being able to buy the city’s famous rose soaps and scented waters when back home in the Emirates, Al-Harthi optimized the sourcing of the city’s famous rose products, and made them more widely available by selling them – and shipping them – regionally.

One of the latest additions to the group of new ecommerce sites selling traditional products is Sesame Asir, a portal for sesame oil from Tihamat Asir, a region in southwestern KSA. Launched in March of this year, its founder Mufarreh Al Asmari is keen for his business to expand beyond the borders of the kingdom. As he said to Firnas: “Start now, not tomorrow. There are virtually no ecommerce risks and barely any operating expenses.”

Sizes not for the faint hearted.

Turki Al-Azizi’s Medina Dates have been successfully selling the sweet fruits online since June of this year. Wanting to take advantage of the burgeoning ecommerce market, he told Firnas’ Rayan Adil that competition is already heating up with other stores such as Tomoor Mall and Mothoq. Al-Azizi already exports to countries outside of Saudi; but he plans to grow even more so by partnering up with competitors so as to further his reach. 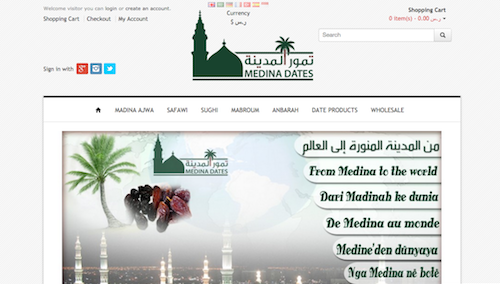 Their site has German, Spanish and French versions.

Such growth abroad might take a while for others though, says ShopGo’s CEO Moe Ghashim. “As the market grows it will be natural to look abroad, but Saudi is a huge market itself. There is a lot of ground to cover here first.”

And ones to watch? “Sites selling oud are very popular,” says Arrabi. And perhaps shrimp, if the fisheries can get their act together. “Saudi has the world’s largest shrimp farm,” he says, but “the Saudis are not great at marketing. They are usually so successful at their business that they don’t need to try.”

So, as the sector in KSA grows, in particular for products sourced, grown or made locally, maybe we’ll soon see camels and herbs make the move to the web.