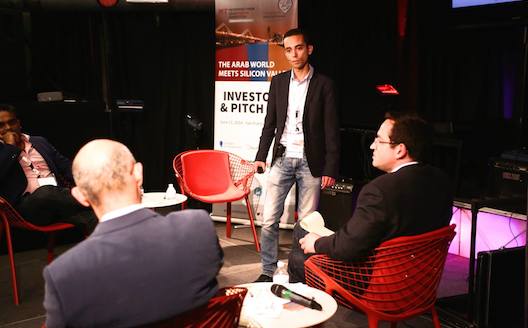 Walid El Alaoui Mrani has always had a clear vision of what he wants to do. Once graduated from engineering school, the young Moroccan moved to Paris to attend business school. Once content with his education, he moved back to Morocco to start a business. “I had no [business] idea, the only thing I knew was that I wanted to launch a company in Morocco.”

Five years later, the discreet entrepreneur is at the head of Azur Systems, a 10-employee startup which took in three million dirhams ($340,000 million) last year, boasts a long list of corporate and governmental clients, and is in the midst of its first fundraising and international expansion.

Azur Systems is a one-stop shop for event organizers, providing online services, or rather tools, that help event organizers manage their call for subcontractors, promote events, create websites, and build custom apps for participants. This final product has been five years in the making.

Wamda met El Alaoui Mrani and asked him about his strategy, his discretion, and his plans for the future.

In 2009, when El Alaoui Mrani came back to Morocco, he created a meal delivery service called Quelmenu.com, similar to Rocket Internet’s HelloFood, which launched four years later. The service failed, he said, because Moroccans weren’t ready; this taught him the lesson to make sure there is a need before launching.

While working on Quelmenu.com, an event organizer contacted him, asking for help building a platform to help event participants book a room in a hotel. He realized that event agencies were still outdated, and started developing solutions. He and his team were hardly the only ones, but others were of limited use, either focused on one segment, difficult to integrate, or only available in one country. In 2010, El Alaoui Mrani started Azur Systems. 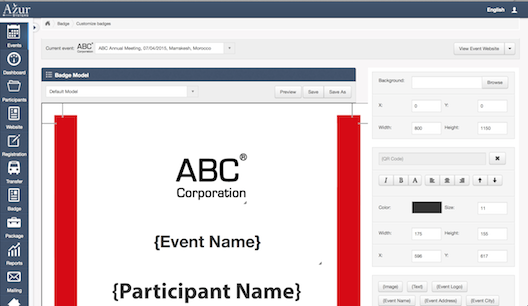 The platform enables users to systemize their badge creation.

Getting there required a good amount of patience. “It’s [taken a] massive amount of education and awareness work [to convince corporations],” he explains. From the start, he opted to cater to basic needs corporations might have, and then, once in business with them, to convince them to go for more innovative and ambitious services.

That’s how he got the Ministry of Interior. “Our gateway was a website for an event they were doing. We lowered the price to the minimum to get the account, and then we talked them into implementing tools like a mobile app for the events, a networking platform, and e-marketing.” 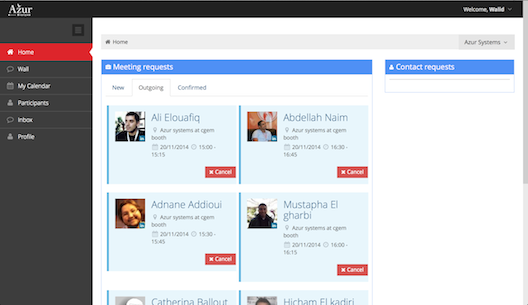 The networking platform for participants.

The challenge of working with corporations

Choosing to work with corporations and governmental organizations is a bold choice, especially in Morocco where they often are paralyzed with extreme hierarchy and lots of red tape.

“It’s true that it’s not easy: you have to pitch the product to people at various levels within the hierarchy because no one wants to take the responsibility, and payment always comes late,” admits El Alaoui Mrani, but these particular challenges are not that hard to overcome. All you need to do is take them into account when setting the financial model. And anyway, he stresses, in Morocco, companies are often working in some capacity for the government, so the payment issue remains the same.

The startup currently offers two types of services: one in SaaS, that can scale easily, and one that answers custom needs, that should gradually disappear as the company scales.

Growing, for Azur Systems, means going global. For the last year, Azur Systems has kept a phone number and a postal address in Dubai, and the team go there to attend events from time to time. “To tackle a market, we need a team working from there to establish partnerships, which costs money,” explains the entrepreneur.

Azur Systems at an event in Abu Dhabi

It was a first for El Alaoui Mrani; up until then, he wasn’t one you would see at mentorship events and startup competitions. In 2006, he participated in the entrepreneurship reality show Challengers, and decided it was a waste of time. “It was a lot of show for little result,” he believes. “In Morocco, when you’re a startup, you’re also a company that needs capital because raising funds will take time,” he says, which doesn’t leave time for competitions and events.

When he launched Azur Systems, the young man decided to focus on the product and the market rather than getting the word out in the startup community. “I didn’t want to take part in a TV show, and meet members of the ecosystem before we had our first users.”

Now that he has a strong team, he can take some time to meet mentors and take part in contests. The entrepreneur joined the prestigious selection process of Endeavor. “The more I exchange with entrepreneurs, and heads of large corporations, the more I see our limits, I step back, and adjust our strategy [mostly on fundraising, and scalability].”

The startup that has long worked on an autofunding model, and which afterward raised money via Morocco’s CMI, is currently in talks with investors in Morocco to start its expansion.