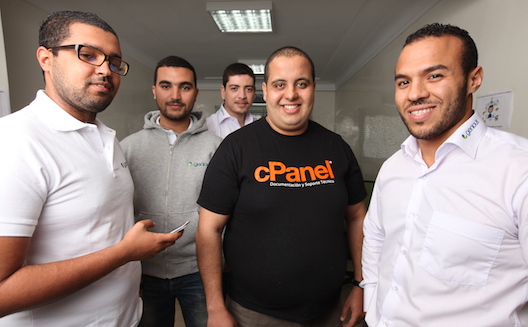 Can you name the leading web host or registrar in the Arab world or Africa? Hamza Aboulfeth, founder of Morocco’s only registrar and most famous web hosting service Genious, highly doubts you can because to him, there’s none. Aiming to become this leader, Genious launched on Genious.net, the international version of the website, on Wednesday.

“The Moroccan market is rather small,” he explains. “We have the potential to grow to a much greater size than what the local market allows us. We’ve reached the 10,000 users milestone, but to reach 100,000 users, we’ll need to go abroad.”

To get there the entrepreneur is betting on localization. Each country where Genious will expand will have its own website in the relevant languages and currency, and will be promoted through localized strategy.

“Each region is unique. It would be a massive error to implement the same strategy in all countries,” believes Aboulfeth. “We saw things work in Morocco, and fail as soon as we used them abroad.”

The company will launch in 20 African and Arab countries, including Senegal, South Africa, Ivory Coast, Tunisia, and UAE. The company has several strengths that should weigh in its favors, believes the entrepreneur.

First off, Genious is one of the rare African and Arab registrars accredited by ICANN, the international organization in charge of regulation and management of domain names (there are only seven registrars in Africa and six in the Middle East). Other web hosting services are only resellers, which means the client may not know where its domain name came from, which can lead to potential problems.

Still, this doesn’t afect Genious’ number of clients, admits Aboulfeth, as only 5% of their clients know what ICANN is. Still this helps to convince larger clients, like Hespress and Hmizate, whose names then in turn helps convincing smaller clients.

The company also put a lot of effort in user experience. “We tried hard to reduce [the time needed to buy a domain name] to the minimum,” continues Aboulfeth. By eliminating several steps, including password creationwhich is generated automaticallycustomers can buy a domain name less than a minute.

The self-funded company, which finally reached the billion dollars sales milestone in 2014, doesn’t want to hurry things up though. “We’ll launch one country at a time, test things out, and see which countries are the best for us,” he concluded.