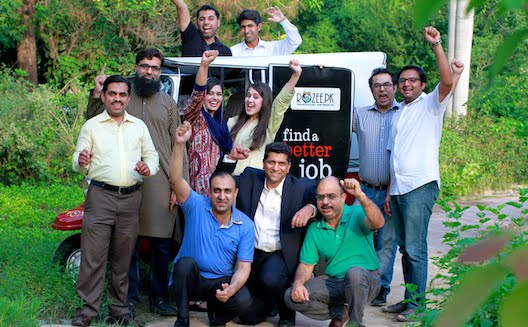 Naseeb Networks, Pakistani parent company of Rozee.pk (in Pakistan) and Mihnati.com (in KSA) employment marketplaces, announced last week it has raised US $6.5 million in a Series C funding round.

This round was led by Vostok Nafta and Piton Capital, and increases to $8.5 million the total amount of cash the company has raised since 2005. “Our primary focus is growing in our existing markets followed by controlled expansion within the Middle East,” said Monis Rahman, founder & CEO of Naseeb Networks.

“This round went exceptionally smoothly,” Rahman added. “The hardest part in this deal was deciding between some very good options in terms of investors. Other than that, our growth and the evolution of the two markets that we operate in did all the hard work.”

In 2008, Naseeb Networks became Pakistan's first online company to ever raise venture capital amidst the backdrop of a suspended constitution, Benazir Bhutto's assassination and frequent bombings.

In an email communication, Rahman wrote: “I remain grateful to our early backers and it has been our singular focus to give them a great return.We have raised their investment value over 680 percent since they invested and increased revenues of our job classifieds business by 115X since 2008.”

By 2013 Naseeb Networks completed its acquisition of Mihnati.com, Saudi Arabia’s largest recruiting solutions provider. After its initial market dominance in Pakistan, Naseeb Networks has grown Mihnati’s profitability and visits over 500 percent by leveraging its advanced cloud based recruitment product portfolio, back office operations and business expertise in employment marketplaces. “Our solutions are used by over 10 thousand companies and 5 million job seekers, processing over 1.5 million job applications every months,” Rahman said.

Similarities and differences between Pakistan and Kingdom of Saudi Arabia

The Pakistani and Saudi markets have demonstrated very strong appetites for our recruiting tools, according to Rahman. “We have been able to take learnings across both markets to strengthen a common product suite across them,” he said. The main differences are the size of the employers. Pakistan tends to have a very large SME market and is super cost conscious. KSA, on the other hand, has very large organizations who value higher end and more sophisticated tools. “This impacts our positioning and product segmentation. It has been a lot of fun adjusting our business model across the region,” he added.

Born in Lahore, serial entrepreneur Monis Rahman spent his childhood in the U.S. and Saudi Arabia. After studying engineering at the University of Wisconsin at Madison, he helped develop the Itanium microprocessor chip at Intel, which inspired him to start his first venture: a chip-design consulting firm.

A few years, a few projects and a few failures later, Rahman moved back to Pakistan and started a social networking site for Muslims in the United States and United Kingdom: Naseeb.com (“destiny” in Arabic). Looking to hire additional talent, he built Rozee.pk which grew very quickly in Pakistan.

Other local companies wanted to post their job offers, and by initially allowing them to do so for free, Rahman was able to offer the largest companies the ability to search through hundreds of résumés for qualified candidates, offer those companies the capacity to power their own job boards and the opportunity to post their branding on the front page of his new website.

By 2007, Rozee was generating more traffic than Naseeb.