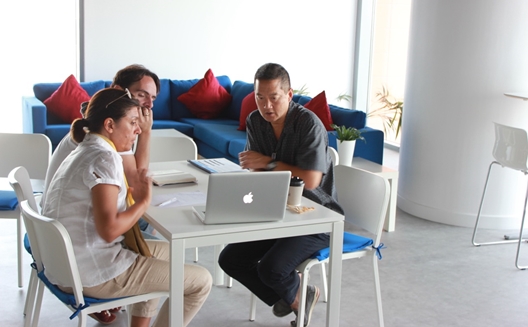 Investor Bern Shen is optimistic about the MENA region’s ability to foster greater entrepreneurship and innovation is at the heart of those efforts.

He says a desire to lead the world as an entrepreneurship hub coupled with the effort being put into developing a startup ecosystem are elements driving the sector forward.

Yet Shen cautions against being impatient for success.

The region still needs appropriate laws and regulations to allow technology and innovation-driven companies to thrive and lacks the experience and expertise that grew over decades in Silicon Valley.

Shen says Arab states, particularly the UAE, are on the right track, but still has plenty of room to build on today’s entrepreneurial foundations.

Wamda: We’ve been hearing the term ‘innovation’ a lot lately. It’s almost like we’re overusing it. How do you define it?

Bern Shen: Indeed, many people have been using the term ‘innovation’ in different ways.

Innovation lies in the way you implement ideas and turn them into real product or service projects. The common notion is that ideas are cheap and we often underestimate the value of academics’ intellectual contributions. However, sometimes it’s true that the idea is not as important as its implementation, because implementation is what gets you innovating.

Someone said that innovation is most influential when it’s integrated in the business plan. For instance, we think today of Apple’s first iPod as unimportant; however, at the time, it was so innovative that it disrupted business plans all over the music industry and the way we download songs.

Wamda: In your long experience, where is the MENA region in its journey to become an innovation and entrepreneurship hub?

Shen: The region has some pretty significant elements, including a leadership vision.

The UAE has officially announced, for instance, that it’s aiming to become the most innovative country in the world in a few years’ time and is seeking to hire innovative managers in all fields as well as allocate huge capitals to fund innovative projects.

Not to mention the fact that the number of incubators and accelerators has doubled in the region, reflecting concerted efforts, even if it’s all taking a bit of time.

Shen: Experience and expertise. I often hear people saying that they want to hear more examples of acquisition success stories, while others prefer to see ten different SMEs engaged in similar activities rather that one giant corporation. Do you know why? Because this would encourage entrepreneurs and form a significant source of inspiration for them to realize what they can accomplish and innovate.

If I were to compare the UAE (where I live) with my home base of Silicon Valley, I would say that that I see in this Arab country considerable space to develop academic and industrial R&D for IP generation, as well as founder-friendly laws and regulations.

Wamda: How could the region address this lack?

Shen: There is no easy way. We must try and try again in order to learn how to do it perfectly. We must learn from every experience and expedite current efforts to develop a transparent and flexible legal framework to startups and SMEs and spread a culture of entrepreneurship in the region amongst immigrants and nationals alike.

Talent, ideas and money will flow globally to favorable settings and the MENA region has a great potential to be not just a market, but also a source of diversified, knowledge-intensive value creation too.

Wamda: Despite the concerted efforts that you mentioned, success stories in the region are still rare. Why do you think is that?

Shen: This is partially due to the fact that things take a lot of time and the ecosystem here is still young. Even in Silicon Valley, Intel started as a startup and it took it 17 years to make its first billion dollars in sales. Thus, I don’t think we should be too harsh in judging startups and investors here if they don’t make a huge success in the first few years, because success takes a long time.

Wamda: In conclusion, what’s your advice to entrepreneurs in the Arab world?

Shen:  I can feel the energy, dedication, and endeavors made in order to turn this region into an innovation hub, even if it would take some time. I recommend entrepreneurs network and support each other through various platforms such as meet-ups and accelerators, exploit their knowledge of local market needs and business relationships, and actively engage  with both public and private stakeholders to create favorable conditions for their venture.