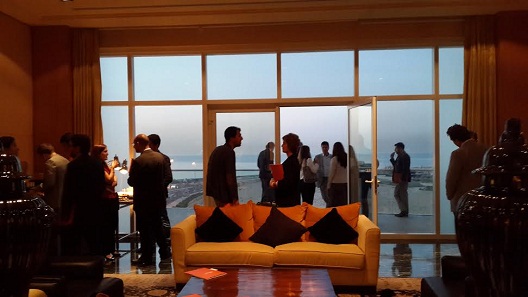 One of the world’s largest global entrepreneur groups, Entrepreneurs' Organization (EO), could have a chapter in Lebanon before the end of this year.

An introductory session held last Wednesday at the Four Seasons hotel in Beirut introduced potential members to the benefits, training, education and, above all, privileges that EO members receive.

"We want Lebanon to be part of the family," said Fadi Fallaha, regional director of EO MEPA (Middle East, Pakistan and Africa) and owner of textile company FALLAHA BROS LLC. "Based on the outcome of tonight, I think there is an obvious need [for membership]," he said, as the main speaker for the ceremony.

With 10,000 members in 147 chapters across 48 countries, EO is one of the oldest and largest entrepreneurs' organizations in the world, Fallaha said. 'Champion' member Ali Kazam has been tapped to launch the Lebanon chapter.

A carefully-selected audience of entrepreneurs - who might qualify for membership - attended last week’s event. But membership may not be within everybody’s reach, as made clear by the organization's qualification criteria.

In order to qualify, applicants must own a business with a yearly turnover of $1 million or more. But there’s more to it. 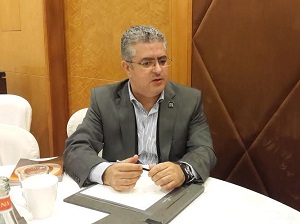 "We are not targeting the number, but the experience," Fallaha, pictured left, said. "For an entrepreneur to build a company from scratch and make it a million-dollar-company in sales, this means a certain level of experience."

"And we are after that experience. We don't care how much he makes; we're [just] taking $1 million as a benchmark."

Entrepreneurs who wish to join EO but have have not yet hit the million-dollar target can participate in EO’s three-year mentorship program. Standard accelerator practices such as investment and equity sharing are not part of this model. Instead, the program relies on a freewheeling model of mentorship and experience-sharing.

"Members get to learn from the experience of others and grow, and that is the whole concept of EO," Fallaha said. He is mentoring four businesses.

Another initiative is the EO Global Student Entrepreneur Awards (GSEA),  which allows students actively running a business to apply for mentorship, networking opportunities, exposure and a prize of $20,000. This program, however, is not available yet within the region. “We're trying to spread it across more chapters. But adopting this program is a chapter-based decision. We are very active in Africa though.”

EO also has agreements with top universities such as London Business School of Economics.

But the organization is not just about learning and leadership. It offers valuable perks and networking opportunities with prime ministers, presidents and even monks.

"A few years ago I attended Istanbul University and had the privilege of dining in the main street of the grand bazaar," Fallaha said. "We also had the whole bazaar for ourselves to shop at our own leisure the whole evening, something that is not usually available."

Another interesting story told by a member is the recent visit to the kingdom of Bhutan as part of a social event. "The king greeted us, and we met Buddhist monks in the "Tiger's Nest" which is something not a lot of people get to do, so a lot of spiritual learning." (Tiger’s Nest is a Himalayan Buddhist sacred site and temple in the kingdom of Bhutan).

On a personal level

The concept of bonding and learning from others' experience seems to be the cornerstone of EO's structure, especially when it comes to forums.  A private 'board' of no more than 12 members acts as a professional and personal guide to members in a non-judgmental context. "We're all running companies through the day and we sometimes feel limited in the people whom we can share our problems with... here's where the forum comes in."

Every forum follows the Gestalt protocol, where members do not rely on direct advice but on previous experiences of fellow members who have been in their shoes before. "Suppose I catch my manager stealing from me," Fallaha said. "How do you deal with such an issue? If you go to a family member or a childhood friend - and most of us are Arabs so we know - they might judge you and say: 'we told you so.' No one likes to be judged, so instead of saying this is what you should have done, members tell you of a similar position which they were in and how they dealt with it."

There were touching stories of fellow members coming through in times of crisis. For instance, a member who got trapped in Yemen during the recent 'war on Yemen', was able to request assistance through “influential connections”.

And following the death of an EO member, two others ran his company free of charge for two years before exiting it for the family, who could then be  "supported their whole lives".