On the 2012 International Day of Pi, four Algerian computer science students launched a geeky science club they wanted to use to change their world.

The four, alongside 13 other students, dubbed it Pinnovate - a mashup of pi and innovate - in honor of the famous number.

“We met for the first time and for real when we started the science club… you know geeks, we meet online first,” said development operations head Walid Ziouche. “We wanted to solve Algeria’s existing problems with technology, if possible. So we set a goal on Pi Day.” 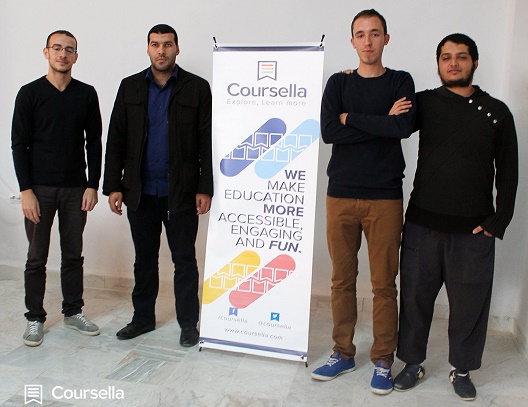 As such, they dived into one of Algeria’s larger existing problems: education.

Their first product, Coursella, not to be confused with massive open online course provider Coursera, effectively replaces a college’s existing on- and offline course and student management systems with a single, self-hosted and customizable software package.

It sounds dull, but is quite a change for a country whose education system is struggling to cope with a massive demographic boom: over a quarter of the population is aged between 0-14. 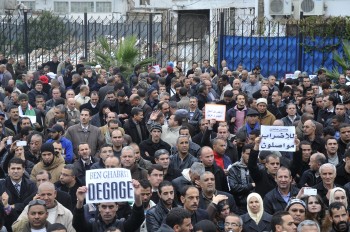 Teachers from primary through to university level have been striking since last year, with all calling for higher wages and the latter demanding a reduction in university bureaucracy and help with housing.

In February, Al-Fanar Media reported the country was short 60,000 teachers particularly in math, physics and foreign languages, and 16,000 were at retirement age.

Working conditions are also difficult, with the government unwilling to budge on wages of $450-550 a month, yet unable to reduce class sizes and demanding teachers work longer hours.

Other Algerian startups working to build and capitalize on the sector are iMadrassa and Dirassatic. In Morocco, MyVLE is an example of a similar product that failed: difficulties getting teachers to use and buy the software, and the fact that sales droped off for most of the year once semesters began terminally hurt that company.

Saudi-bred Acadox is the leading regional learning management software provider and shows just how huge the market is.

Coursella is following in the footsteps of US-grown Blackboard and Acadox, neither of which are available in Algeria, and grew from the founders’ own struggles while attending the University of Annaba.

Ziouche said email communication was bothersome; they could see teachers struggling with revolving email lists for students each semester; and file sharing services were bulging with ads.

Some students were hacking out a system using Facebook, but “Facebook is bloated with distractions” and was no substitute for a decent academia-focused system, Ziouche said.

After setting up a few events - a Linux Install Party and TedX Annaba, among others - they got serious and in January 2014 won the tStart entrepreneur competition with the Coursella product alongside four other startups, including their rival Sidi Said with Dirassatti. In August this year they emerged from a year-long stay in the tStart incubator in Annaba.

Ziouche credits the incubator and its Qatari sponsor, telco Ooredoo, with helping to teach the foursome how to turn Coursella into a viable business and opening doors to their first two clients, who they signed three months ago.

MDI Business school and the Institute of International Management (INSIM) are testing the software, and Ziouche expects to sign more paying customers from Algeria’s 800-odd high schools, universities and private colleges before the end of the year. Neither responded to Wamda before publication.

“For now we only targeted Algeria but at the same time we’re still open to the MENA region… the platform is already translated into three languages, Arabic, French and English, and we think that is sufficient to reach the MENA region.”

A move into MENA, beginning with neighbors Morocco and Tunisia, could come in six months time, and an Android app is in development.

The startup has bootstrapped so far, accessing a share of a 2 million Algerian dinar fund ($19,000 USD) through the incubator, and has no intention of taking on investors in the short term.

Ziouche said although the company was not yet breaking even, it needed only 10 paying customers to reach that point. The software uses graded monthly pricing, the founders do not wish to reveal yet.

However, the Algerians' product is, as yet, more expensive than options in the increasingly competitive US market, where prices for software-as-a-service learning management software can reach $199 a month for 500 active users and reach as low as $39 a month (standard licence vendors and open source systems have extra costs and can be much more expensive).

Ziouche said the Coursella software was cheaper than that provided by their Saudi competitor Acadox.

However, Nabulsi said the Acadox pricing scheme had changed a few times in response to market demands, so he did not know which scheme Ziouche was referring to. He added that pricing wasn't the main issue they were running up against, but facing down international brands, building a reputation, gaining cliet trust and keeping up with the changing demands of customers.

With so much student and course data being held within the Coursella software, cyber security should be a major consideration for both client and startup.

Alongside basic security features such as using https protocols, Coursella is putting individual institutions’ information into ‘containers’ using open source platform Docker. This means information is built into silos spread over two servers, making it harder for hackers to access.

The other problem, well known to any Algerian startup, is navigating the country’s decidedly startup-unfriendly bureaucracy.

“It’s really tough to start a startup here in Algeria. The administration is not as [efficient] as we’d hope,” Ziouche said.

Furthermore, although colleges in the nascent private sector are responsive to their overtures, the founders are struggling to find entry points within universities.

“The university's’ administration is really tough as well and you can’t get access to it,” he said. “Fortunately Ooredoo helped us in starting the startup at the administration level. For now we are targeting private colleges and high schools because their administrations are much more responsive.”

If Pinnovate can grow fast enough to carve out a North African market for itself, it will gain a healthy foothold against the dozens of rivals spread throughout the world. But the newbie business will have to prove itself at home first.