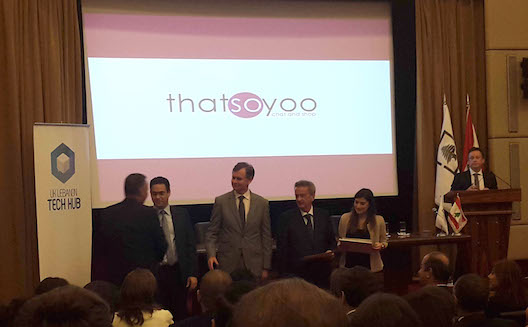 The startups going to London, and continuing in Beirut received certificates of their achievement. (Images via Lucy Knight)

The first 15 startups to go to London with the UK Lebanon Tech Hub (UKTLH) were announced today.

“Prove to the world’s tech community that Lebanon is a giant in the making,” was an opening statement from Nicolas Sehnaoui when addressing the audience at the Lebanese Central Bank on October 8.

Shortly after the particpants in the 'Phase II' of the International Accelerator program were made public.

As we’ve reported before on Wamda the new accelerator, which was launched in June 2015, is designed to develop entrepreneurs in Lebanon working within the Knowledge Economy and ICT sectors.

Phase II will take the 15 finalist companies to London for a period of six months. While in the UK the startups will be exposed to the British, European, and global markets.

Originally just meant to be these 15, the accelerator also announced that they would be expanding the program for another 11 startups as part of a ‘Beirut Phase II’. The accelerator will work with these startups on their regional expansions.

Over the course of four months those who were chosen for Phase I (45 in total) worked with an international expansion goal and the accelerator has worked to support them in their scaling, as well as connecting them to international markets.

“Being present in the UK, which is also a window to the rest of Europe will be key to meet and develop those important partnerships with music and big box retailers,” said Band Industries CEO Hassane Slaibi. He will be off to London in November to start Phase II.

As the region’s startup ecosystem grows UKLTH is one of a new range of supporting organizations looking to grow the reach of local startups. In September 2015 the Palestinian House in Silicon Valley announced its hosting of six startups from Palestine.

Basing the startups in East London’s commonly referred to ‘Silicon Roundabout’ British ambassador Hugo Shorter said that the mutual benefits that both countries would be gaining from the 15 startups going to the UK would be great.

“We’re hoping to launch the first version of our product by the end of the year,” said an excited Marilyn Zakhour, head of ventures at Keeward, a creative accelerator that joined the UKLTH to work on their ad network for independent publishers, Hyper Tango. “2016 is going to be our year.” 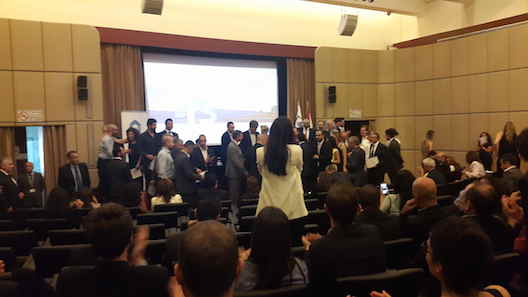 The aftermath of a group photos with all 25 startups.

The full 15 heading for London are listed here:

Transterra Media - launched in 2012 they are a digital news marketplace working with more than 2,000 journalists across the world.

SLIDR - a gamified ecommerce platform for those with high-end tastes users will be able to get items or experiences by paying £1 to reveal the price. With 10 seconds to make their purchase decision, prices will always be lower than on the high street.

Markelligent - an integration of software, hardware and data analytics for businesses looking to create better communication with clients.

Roadie Tuner - from Band Industries this is a hardware solution that will fine tune a guitar in seconds. The handheld automatic tuner allows guitarists to tune quickly and create their own custom tuning.

Sensio AIR - a hardware and software solution for detecting all the harmful particles you breathe. An algorithm then gives an evaluation of the actions you need to take to improve the quality of the air in your surroundings.

Thatsoyoo - a social shopping network that allows users to chat and shop their favourite brands together in real-time, while providing clients with analytics on consumer behavior in the retail sector.

Brate - launched in 2012 this is a platform that helps users uncover what things are trending, in 10 markets in the region, guiding them to the nearest places that sell them, creating footfall and helping businesses drive sales.

Keeward - an accelerator for technology and media projects. They work with creatives in venture development, media, education & consulting, design and research & development.

Slighter - a lighter that monitors user use in order to help them quit smoking. An additional app also allows users to share their progress with other Slighter users.

Infosysta (App4Legal)- a software for legal teams to manage clients and track their data in a single location.

ParentVille - a social platform that connects parents, educators, health professionals, and business and community leaders in a user’s local area.

Game Cooks - a collection of designers and developers creating mobile games since 2012.

Skoolee - a school management and student information system designed specifically for the MENA region, covering everything from registration to report cards, to medical record keeping.

Tourist Tube - a video platform that allows users to upload their tourism videos from around the world.