At the end of 2015 Laundrybox’s business model, and solid teamwork, secured them the third place at Forbes Middle East’s 15 Most Promising UAE-Based Startups in 2015.

The list, drawn up by the magazine, was based on the amount of money raised, investor perception, executive team, market reach, website ranking and number of employees.

It has been two years since the launching of the “modern laundry” service, one that relies on smart laundry lockers’ that allow customers to deposit their dirty clothes, and receive an SMS notification when they’re ready.

So far, things are going great for the startup, according to founder Bader Al Kalooti, who maintained that the company’s performance exceeded the team’s expectations in terms of profit, expansion and future plans. 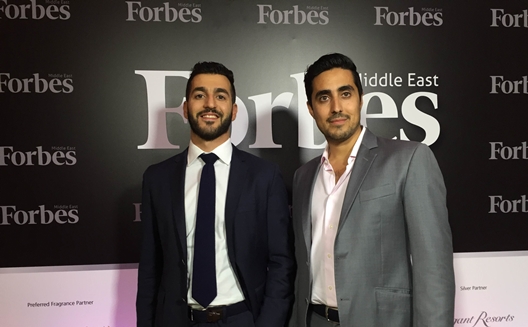 The cofounders Bader and Fahed Al Kalooti. Their startup was chosen Forbes Middle East as the third  most Promising UAE-Based Startups in 2015. (Images via Bader Al Kalooti)

Launching in 25 buildings in Dubai with a 1,000 monthly customers and 20 employees, the startup has since grown to reach 70 buildings throughout Dubai.

“We’ve expanded our services to many places,” Bader told Wamda, “especially Dubai Marina, The Palm, The Greens, Jumeirah Lake Towers and others. The company now has a team of 65 employees including drivers, business managers and IT.” They have 7,000 users in total.

Not relying solely on its locker system they have recently developed an “uber-like app”, said Al Kalooti, to help customers find nearby lockers.

“We launched the app almost six months ago, and we have managed to attract more than 3,000 customers who have the freedom of choosing the time it suits them,’ said Al Kalooti, “and doing all payment procedures on the app.

“People who have the chance to use lockers or the app, usually opt for the first choice because they don’t have to coordinate with anyone,” explained Al Kalooti, “and they prefer [to have] a 24/7 automated system.”

“Even if the the locker system is still a solid tool for us, we can’t be available in every building,” he added. “So, if customers want our services, they have to use the app. We are one of those rare companies who have an app, laundry service and high quality services.”

Aside from all these successes, Laundrybox successfully sold its first franchise rights, expanding outside of Dubai for the first time. It is expected to launch Laundrybox’s service in Qatar in the first quarter of 2016.

The Dubai team aids in training and following logistical procedures and quality standards. With several requests for franchises they have decided to use Qatar as a testing ground.

Al Kalooti told Wamda that while Laundrybox is making money, it’s not making profit yet, as all money is being put into business development. “We don’t care about making profit now,” said Al kalooti, “but about making the maximum revenues so that they can be reinvested in the company. And we’re doing that pretty well.”

After raising $1.3 million from nine investors for their Series A round and $1.4 million in the Series B round, Laundrybox called for a Series C round, which capped for $2 million, a round raised by previous investors, along with Mena Ventures Investments (MVI) and individual investments.

Al Kalooti said that the money will be invested in “preparations and launching of their set of features, and expansion to extra sites and launching a marketing campaign (a digital campaign on social media, the first since the launching of Laundrybox) and developing the new platform MyBox”. 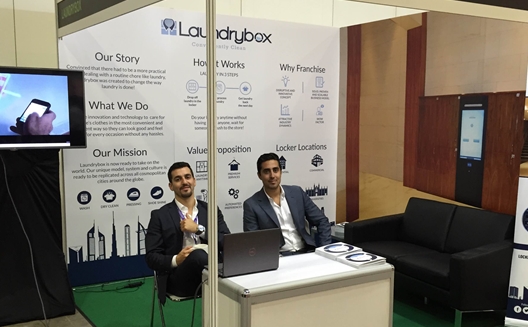 The brothers at an exhibition in Singapore. They might expand to all of Asia.

For Al Kalooti, MyBox is the natural succession to LaundryBox’s business model. “We realized that the system that we created and the technology we developed could be used to facilitate other conveniences, not just laundry,” Al Kalooti said. “We have the logistical services and technology as well as the lockers, which constitute a basis for distribution, and [we have] a customer base who will use our lockers for other purposes.”

MyBox will be launched at the beginning of 2016. The platform will offer several services, one of them being Laundrybox. “The idea is about offering an umbrella of convenient services in one gate, as if we’re expanding our services horizontally using the same infrastructure and the same concept: complete automation for every procedure.”

The platform will also host Storage Box for clothes, a Shoe Box for all shoe-related services, a Tailor Box for tailoring services, and a Charity Box to give away unwanted clothes.

The company plans to partner with well established tailors, charities, and shoe cleaners.

However, it plans to take the driver’s seat in logistical and communication procedures, in order to remain in control of their product, from start to finish.

Like any other company, MyBox will launch in stages. It will have a brand new site in the coming few months. This stage of business renovation was very challenging for Al Kalooti, who said that it was like launching a new company from point zero, especially because every service has a completely different dynamic. “You have to understand each one of them and invent a suitable system for it, something that required a lot of research and development,” said Bader. This might be true, especially in a traditional sector that has long been characterized by the human touch.