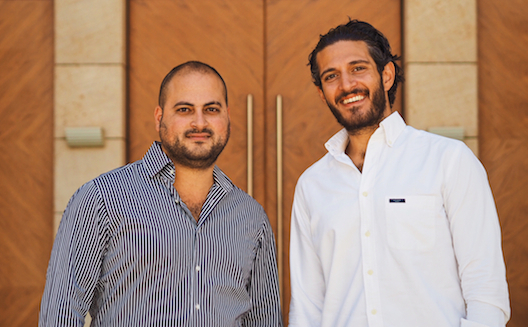 Ecommerce is constantly evolving and becoming more advanced, but shipping is hindering its progress.

It’s one of the biggest problems in ecommerce, especially for social sellers and SMEs who can’t get cheaper rates from couriers, an issue born out of the fact that they don't have corporate accounts which requires getting a trade license.

Jordanian entrepreneurs Fares Nimri and Sari Issa were very much aware of the gap between ecommerce platforms and couriers when they decided to launch CamelShip in August 2015 as a shipment solution for the ecommerce sector in the UAE.

It all started when Issa and Nimri randomly met in a cafe in the UAE at the start of 2015.

Issa, who had studied digital branding and was living in the Emirates, was looking for an online shipment service similar to what he used back in the UK, but couldn’t find any.

Similarly Nimri, an MBA graduate, who has worked with several startups in San Francisco, was also having problems with shipping personal packages from the Middle East to the US.

CamelShip is a shipping quote engine (aka courier comparison platform) that hosts three different couriers Aramex, Sky Net, and Parzel. Anyone can use the service but it is mainly targeting social sellers and SMEs.

Currently, to use the platform, you need to be sending shipments from either Dubai, Sharjah or Abu Dhabi but the destination location is unrestricted.

Once you select your location and parcel size, three different quotes and couriers would be offered to you to compare and choose from. Payment can be done online or on delivery.

To date the company has shipped around 400 packages.

The CamelShip model is similar to other international platforms such as ShipGooder, My Parcel Delivery, Parcel2Go and interparcel.

Nimri explained that online sellers and platforms can now avoid hassle of using couriers independently, a process which involved higher costs and the inconvenience of contracts, cash deposits, and trade licenses. 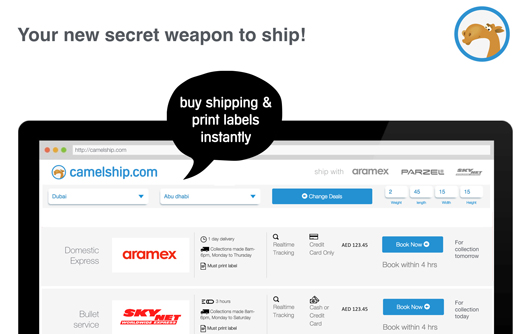 Couriers benefitting just as much.

In fact, Issa argued that using couriers independently would cost 20-30 percent more than if senders used CamelShip. “It is cheaper because we aggregate volume, and our rates depend on volume, so we pass that volume rate to our customer,” Issa said.

The consumers are not the only ones benefitting, couriers as well get an added value: “It is faster for couriers to on-board the SMEs and ecommerce websites through us, [especially as it’s hard for them to reach the sellers who don’t have trade licenses],” Nimri said.

In terms of competitors, the cofounders said Fetchr could be counted as one, except that it only deals with a single courier and doesn’t compare multiple options.

Fetchr is a Dubai-based delivery app that uses GPS technology to track the sender’s location, pick up orders and deliver the package at a time and day specified within the app.

Up until now Issa and Nimri have independently funded themselves and made a profit from commissions.

However, they will seek angel investors soon and are hoping to host more local and international couriers.

The team has now expanded to five people, three working from Dubai and two from Amman.

As for its geographic operation, the company is currently connecting with potential partners in hope to scale throughout the Middle East and Turkey. The interest in Turkey, Issa pointed out, is related to the “huge unfragmented population and the new market and boom that have just started [there]”.

In addition to the platform, they will soon be launching a B2B service for online marketplaces, in which a CamelShip plugin could be embedded into online stores.

As a start, their API will be integrated into Shopify and Magento.