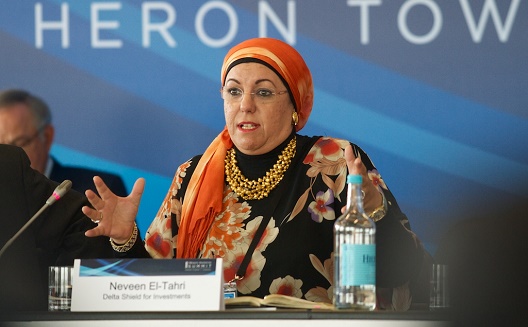 International Women’s Day, which is on Tuesday, was a convenient foil to cover El Tahri’s thoughts on what it was like to be a woman entrepreneur in Egypt in the 1990s and an investor today.

El Tahri launched one of the few brokerage companies into the newly revived Egyptian stock exchange in 1994, becoming the first woman to do work on the male-dominated trading floor. She recounts stories from that era with a smile now, yet admitted at a forum in Beirut last week that there were days when she wanted to go home and cry, but that crucially it did not push her to give up.

She told Wamda that she’s built 13 companies and exited 17 times, having bought back into some of them.

138 Pyramids, launched in 2012 with $10 million capital, is the vehicle through which El Tahri invests in startups.

“[We’re] shying away from technology unless it’s an enabler in employment or an enabler in general,” she said. “Everybody else is focusing on technology so we decided to concentrate on all of the other sectors.”

138 Pyramids has invested in four companies, according to its website, two of which have female founders - Temraza and Barakah Agency - although the latter has since merged with another company.

You’ve got to prove yourself to compete in a man’s world. The stock market in 1994 was very much a man’s world, and my company was the first to be established by a woman and run by a woman. There were only 12 companies [in total...] and on the stock exchange floor I was the only woman. Nobody gave you more credit for anything or disrespected you - they just ignored you. The challenge was how to convince the client that you were just as capable as a man.

Male dominated environments don’t matter if you’re efficient. There were a few times where I would be working on a project and then the client would go to one of my competitors after they’d had a drink together or met on the golf course. In the beginning it was tough building the business, but later on, as one proved oneself and became known to be efficient [at creating and closing deals], it became easier.

Women founders like women investors. About 80 percent of my investments are with women founders. Venture capital is built on entrepreneurs’ experience so each has different ideas about how to run the business based on the knowhow they have acquired. I’m lucky [in that] because I’m a woman, I see a lot of women come here. Is [my situation] unique? I don’t know, maybe in a couple of years time we can look back and see how many of those different venture capitals have invested with women.

Investing means giving back. Hopefully my ‘investments’ will become as I once was and create jobs. I’ve made a lot of money over the years in terms of establishing businesses and selling them. So how to give back in terms of this acquired knowhow? Being a partner with entrepreneurs gives them the solidness of knowing [that...] they need not go anywhere else as you can provide all that is required in terms of knowhow and growth.

Female VCs in the future are not a certainty. It’s hard to say whether we’ll see many more women VCs in MENA.It doesn’t really matter though because there is no gender in investing, it’s not a gender issue at all. It doesn’t matter who is investing.

Anyone can be an angel. Investing just money is not really what I would be advising women to do. As an angel investor [...] it’s all about the choice of entrepreneur and the business that you think you can be passionate about. And if it doesn’t really [work out] you will not have wasted money because there is learning that you will have brought these entrepreneurs and you can always invest in them again.

Know your investing style. I only put money into established startups.I'm not very good at investing in ideas, I only invest in companies or in people that have actually generated revenue so there is a proven concept of what they do.