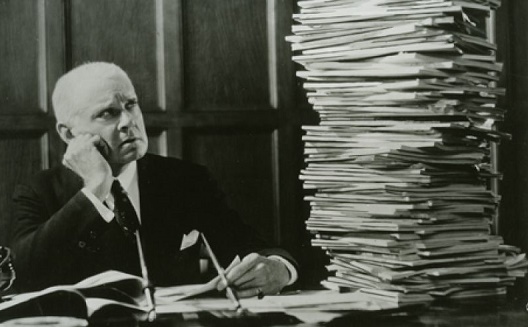 Starting a business can involve serious amounts of paperwork - but you've got to get it right the first time. (Image via Coseer)

“We’re looking to raise $1 million at a valuation of $5 million.”

This is a common line on which entrepreneurs in the Gulf close their fundraising pitches.

But closer attention to company laws in the GCC reveals that raising capital at a valuation higher than book value is not as straightforward as it is in, say, the US.

Company laws in both Saudi Arabia and the UAE say that all shares in a limited liability company (LLC) must have the same value.

This effectively means that founders can’t issue shares to some investors at a higher or lower valuation than to others, because the per-share value must be equal among all shareholders.

All of this means that in our example above, the entrepreneurs would have to pay $4 million (in real money) for 80 percent of the company in order for their prospective investors to pay $1 million for 20 percent. Otherwise, in the eyes of the law, the investors' shares would have a higher book value than those of the founders.

This obstacle can be addressed by using a joint stock company (JSC), which allows equity to be issued at a premium and the issuance of different classes of stock.

However, the administrative cost of forming and maintaining JSCs are too high for most small businesses. JSCs require the submission and approval of feasibility studies, organization plans, applications to regulatory authorities to approve the formation, and follow restrictive formal procedures such as having government representatives attend general assembly meetings.

So the question is: how do entrepreneurs and venture capitalists overcome the limitations of an LLC without fronting hundreds of thousands of dollars to convert into a JSC? 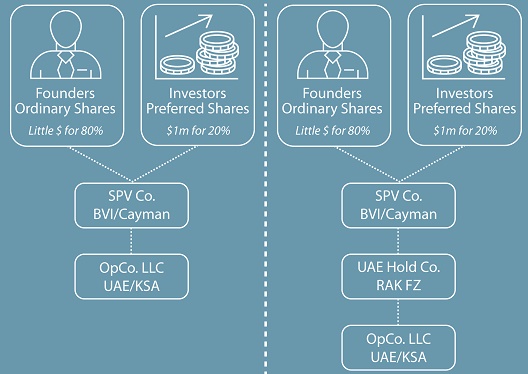 In the Gulf entrepreneurs sometimes have to think outside the box before they even start the business. (Image via SME Law)

A common solution is to own the local LLC through an offshore special purpose vehicle (SPV) that houses both investors’ and founders’ shares. The SPV allows investments to be raised via different classes of shares at different share prices, and authorizes dividends to be paid on top of shares’ face value.

The higher valuation translates into shares issued at a premium to face value, thus lowering the number of shares issued to the investors versus the founders. The valuation can also be set by issuing preferred shares; these have a higher claim on company assets, such as dividends or profits, than common shares and receive payments before the latter.

The British Virgin Islands and Cayman Islands are commonly jurisdictions for setting up SPVs. For investments into Saudi Arabia, the SPV can be coupled with a second-tier SPV registered at a UAE offshore jurisdiction, such as the Ras Al-Khaimah Free Zone, to meet the Saudi Arabia’s GCC exemption to foreign investment regulations.

While we agree that SPVs do add administrative costs for startups, they are much cheaper than maintaining a JSC.

But many MENA countries are looking into lifting capital inflows into startups by lowering obstacles such as this one. An example is in Saudi Arabia where the government recently lowered the minimum capital requirement for JSCs to 500,000 Saudi riyals (US$133,300).

But LLCs and SPVs still offer cheaper, more flexible, and more commonly used processes for founders and investors to set valuations of rounds in growth companies.