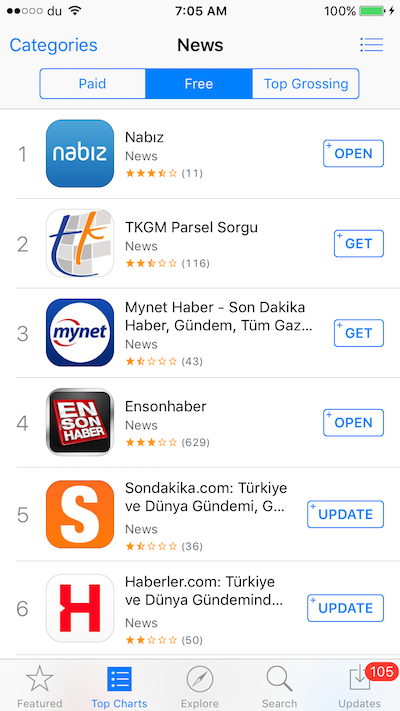 Kuwait’s Nabd, known as the Flipboard for Arabic news, has launched in Turkey with an Android and iOS version called Nabiz on April 7.

Launched by Kuwaiti company Waveline Media in 2013, Nabd (which means Pulse in Arabic) is an app that features over 1,500 Arabic news sources.

It has over 9 million users, according to VentureBeat, and has gained huge popularity because it was one of the few Arabic news aggregators and one place where readers could access breaking news instantly.

Nabiz has around 300 Turkish news sources on a variety of topics, and a feature that enables push notifications for breaking news.

The new app has been featured by Apple and chosen as the Editorial Choice, according to Waveline Media CEO and cofounder Abdur-Rahman El-Sayed. It was also featured by Google on the homepage of Google Play. Nabiz was ranked number 1 in the news category in the Turkish App Store.

Despite the linguistic differences between the Turkish and Arab markets, El-Sayed explained that Turkey was very close to the regional market.

“Despite the language difference, Turkey is very close to the Arab world with similar news consumption habits, and it enjoys over 30 million smartphones users.”

Aside from the language difference, the setup cost was not significant, El-Sayed tells us, but the company had to hire a team of “highly-qualified Turkish specialists, to ensure that Nabiz becomes a success and to assist us with localization, content analysis, marketing plan, and market sizing.”

Waveline Media, which is based in Dubai and Kuwait, launched in 2010 to offer development services for mobile apps. Some of their clients include Ooredoo, Turkish Airlines, National Bank of Kuwait and Nissan.