Startup valuation has a direct impact on the founders’ remaining share in the company after each investment round, and it impacts the monies that the firm’s owners walk away with subsequent to an acquisition.

Because the venture’s value also carries a strong weight when negotiating merger deals, or even when attracting new employees, entrepreneurs need to understand how valuation is calculated. 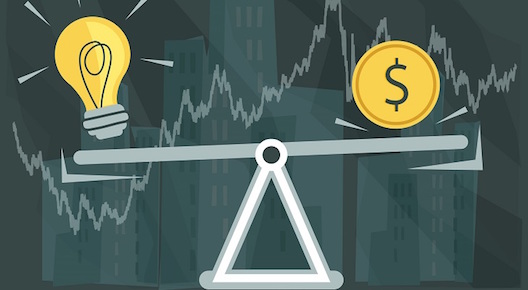 As the saying goes, there's more than one way to skin a cat. The same goes for quantifying the value of a startup. (Image via Nenglobal)

Valuation is the sum of equity and debt values, and equity is what investors are generally interested in assessing. But because startups are new endeavors without a track record, startup valuation is often more art than science. Still, a number of methods can be applied to anchor valuation efforts in a logical and widely accepted framework of analysis.

Perhaps the most straightforward method of pinning a dollar value to a firm’s equity is the Asset Based approach. This is closer to an accounting method where the total asset value from the balance sheet, minus the total debt, results in a figure for the firm’s equity.

But when it comes to startups, this approach generally yields one of the lowest valuations, since many startups don’t own enough assets to justify high figures.

Startups should consider an expected future reward based on proprietary intellectual property, market prospects, and more. In accounting terms, this difference between actual assets (net of debt) and the underlying promise is referred to as goodwill, a factor that justifies introducing a certain multiplier to the result of the book value difference between assets and debt.

The multiplier is a qualitative figure that reflects a combination of that future promise, market trends, investor decision power, sheer negotiation, and inflation and time factors, should competitors attempt to invest the same amounts to recreate equivalent offerings.

It is worth noting that the Asset Based method combined with a multiplier is sometimes referred to as the Cost to Reproduce valuation method.

Another quantitative method is the Discounted Cash Flow (DCF) analysis. This approach entails listing the firm’s past costs and revenues figures, and projecting them three to five years ahead.

Although this approach is mostly suitable for companies with an actual track record for costs and revenues, it can still serve as a useful tool for startup valuation because of the thinking and research it requires to relate future projections to strategic plans, coupled with a proper market analysis to predict expected revenue figures.

Inherent in the DCF method is an interest rate, which is used to discount future cash flows: the Weighted Average Cost of Capital (WACC).

The WACC is a calculation based on corporate finance theory where market conditions and risks associated with the venture itself lead to an estimated cost of investment money for the startup. In MENA, the WACC figure is generally in the vicinity of 30 percent and above.

By discounting future expected cash flows at the WACC value, a simple calculation can provide a present value for the firm.

For pre-revenue startups, the analysis can be as simple as listing a few similar companies operating in the same space, and finding or estimating their equity values, before comparing those to the startup by taking the average or median as an example.

For those companies that are already generating revenue, a more accurate comparison can rely on equating the ratio of the comparable companies’ equity valuation to their sales figures (as determined by EBITDA, or net revenues), to the valuation and sales figures of the startup of interest.

There are other methods for startup valuation such as the Dave Berkus method, which is useful for early stage and pre-revenue startups.

The Berkus method associates a certain dollar value based on criteria such as the idea itself, whether a prototype has been developed, quality of the management team, and market traction in terms of strategic partnerships established and sales figures.

The Berkus way offers the advantage of a granular calculation, but is capped at a maximum of $2.5 million. Capping may not be adequate for high promise endeavors, meaning those firms heavily involved in the development of their concept and that are engaging in fundraising stages prior to commercialization and revenues.

A more comprehensive way to valuate a startup can consist of a combination of the methods above, by assigning weights to the outcome of various valuation methods.

This is referred to as the Weighted or First Chicago Method, which associates a certain percentage to, say, three valuation figures, one for the low end of the spectrum (for example, the result of the Asset Based approach), one for the middle and one on the high side.

The middle and high side figures can relate to reasonably optimistic and very optimistic estimates using methods such as the Discounted Cash Flow, or Market Comparables.

No hard and fast rules

Whatever method is used, it is important to underline that the final figure agreed upon with investors and similar stakeholders is generally more of a negotiation than the definite result of a mathematical calculation. Some investors may have their own guidelines for assessing the value of a startup, based on factors as diverse as the target industry, geographic location of the company, and founders’ profiles.

How do you value shares?

This last calculation raises a few immediate questions, namely: how does valuation relate to equity ownership; how do investors decide what percentage stake they want; and what should founders keep in mind as they negotiate valuation figures for their company. The first question requires understanding that ownership percentage is a ratio of owned shares to the total share pool.

The valuation number itself gives a calculated value for the pre-money value of the stock price: if the share pool prior to investment is 500 shares, and pre-money valuation is $5.6 million, then the share price is $11,200. This means that an investor putting in $1 million is actually buying 89 shares (rounded).

Following the investment, in which 89 new shares will be issued, the total share pool will be 589, and the investor will therefore own 15 percent.

The founders’ ownership will also be affected by shrinking accordingly: this is referred to as dilution. Assuming the founders owned all of the 500 shares prior to investment (100 percent equity share), they will end up with 500 out of 589, which equates to 85 percent.

Adding IRR to the calculation

The investors’ decision to aim for a given post-money share is mainly related to an Internal Rate of Return (IRR) investors wish for. Given estimates of values at which the company may be sold after a few years, the percentage stake will allow cashing in a certain amount.

Relating that amount to the present investment gives an IRR figure. The value at which a company may be later sold is generally calculated using projected yearly revenues, multiplied by an industry and sector-specific multiplier.

In the example above, investors are putting in $1 million. If five-year projected returns are $10 million, and the revenue multiplier for valuation at that future moment is five, then the future valuation of the company five years down the line will be $50 million. So if investors seek a 50 percent IRR on their $1 million investment, they will need to cash in about $7.6 million at exit time, meaning 15 percent of the $50 million value.

It is also important to remember that an investment round is likely not going to be the last, at least not until the company becomes profitable and able to fund its future growth.

As a result, company owners should attempt to retain sufficient ownership in order to maintain leeway for future dilutions that will undoubtedly come about in subsequent fundraising rounds. Voting rights associated with newly issued shares are also quite important, since ownership is not only about being able to cash in future dividends or capital gains, but also about retaining sufficient decision-making power in the firm’s fate.

After all, entrepreneurship is not just about making it big, it’s also about turning a vision into reality, probably an equally if not more valuable outcome for any entrepreneur.