In 2017, global revenues from streaming surpassed both physical and digital music sales, putting rest to the debate on whether or not streaming would make up for the decline in recorded music sales. Streaming now accounts for 38 per cent of total recorded music revenues, with exponential growth expected.

While the hotly contested space, with razor thin margins, has its clear winners globally, the race to capture Arabic music fans seems to be just getting started. Spotify recently announced its entry into the market, a few weeks after Deezer. Anghami, the region’s Beirut-born streaming platform, has been around for a few years, but has not raised a sizable round of financing in over a year.

Other players, like Apple, Tencent Music, and YouTube, all have large enough cash reserves to give them all a run for their money. But does any of this really matter for the Middle East and North Africa (Mena) music industry, which is heavily plagued by piracy and reliant on live performances and sponsorships. 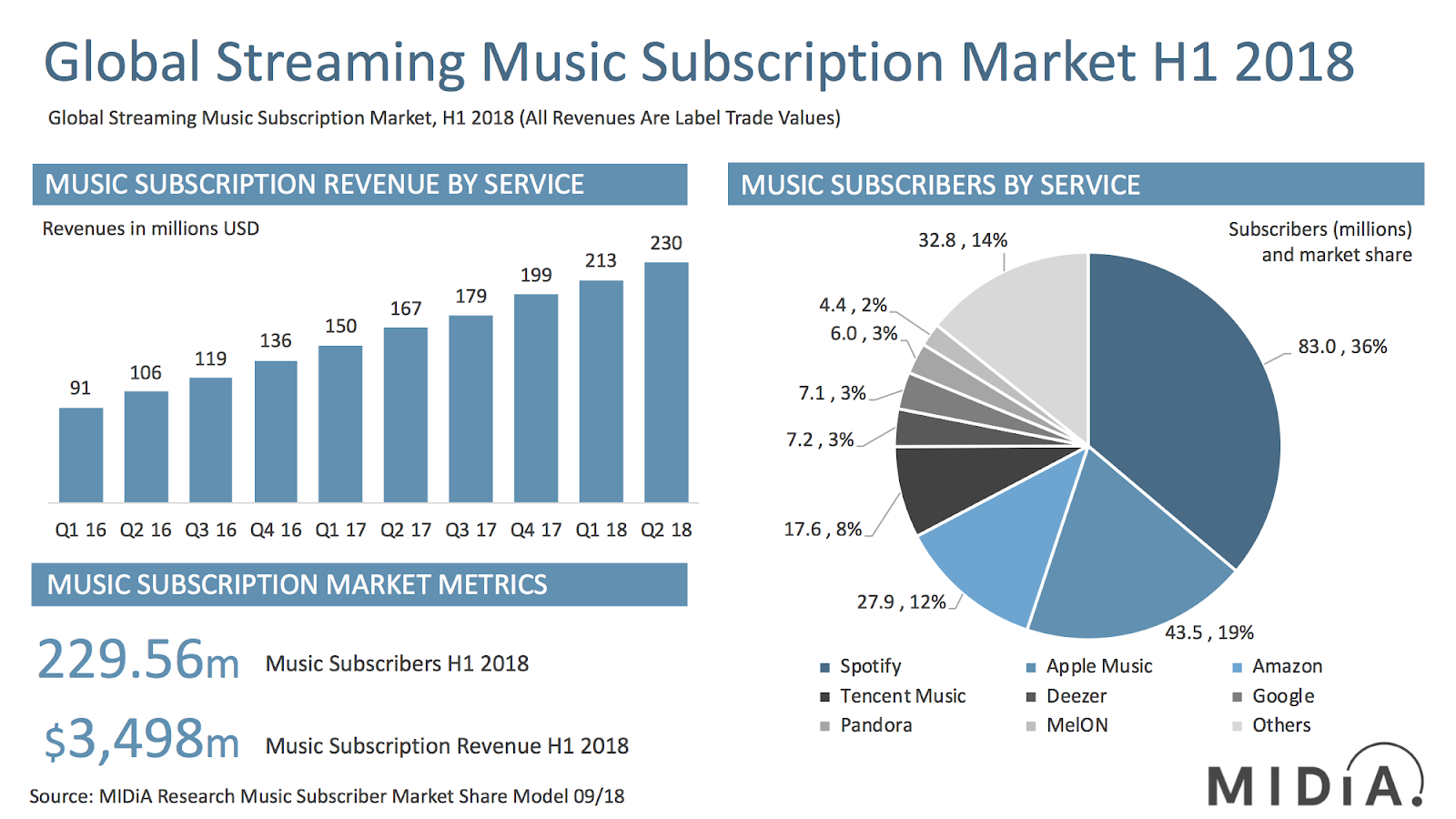 Spotify recently went public, and its story, like Netflix,  is one of user growth. Growing user base while maintaining margins at or around 20 per cent is what Wall Street has bought, so global expansion is a natural continuation of that strategy. Mena is a 350 million person market. Spotify also has a catalogue of global content that no one else has.

However, it is a paid subscription model. The advertising model is really ineffective in generating any revenues for them, so it would be interesting to see how flexible they will be on monetisation and whether or not it is willing to sacrifice monetisation for user growth, or whether it will stick to healthy unit economics as a strategy.

Anghami has been in the market the longest, and has focused on local content and monetisation streams, including deep integrations with a wide array of telecom operators in the region and advertising agencies and brands. However, Anghami is a smaller player and revenue per user is far lower than a global player like Spotify. It also does not have the war chest that will allow it to continue to reign free over the market.

The underdog in the Mena streaming wars is Deezer. It launched in the region a while ago but only recently allocated a dedicated team based in Dubai. It is dwarfed in size by Spotify on a global scale, but it recently raised a whopping $266m from Al Waleed Bin Talal by way of his wholly-owned subsidiary and largest record label in the region, Rotana Music. This probably means Rotana has extended favourable terms to Deezer, but perhaps only at the expense of artists. Further, Rotana’s value lies mostly in its catalogue and existing relationships with artists, rather than on new and younger talent, which means that it will only take them so far before its catalogue becomes obsolete. Rumors are that Rotana Music has been seeking an acquirer for years, valuing itself at no more than $150m, a tiny amount for the region’s largest record label and recorded music library.

The real underdog is Youtube. It offers ultimate convenience for the consumer, free streaming, with a huge catalogue. For the artist, it is a platform on which to be discovered. How streaming services will be able to compete with Youtube is unknown. How can you compete with free? And how do you create a relationship with fledgling artists that allows them to get exposure?

What about Tencent and Apple Music?

Apple has a head start by way of iPhone penetration in the market. Apple is also hoarding cash and may choose to use that to lure rights owners in the region and acquire users en-masse. It has already hinted at repositioning itself from a hardware to a services business recently.  As for China’s Tencent Music, that unit of Tencent will likely go public within the next few months, and as with Netflix and Spotify, the lure of streaming services is user growth.

If Spotify and Apple really ramp up their presence in the Mena market, that might tempt Tencent Music to acquire Anghami. Could that be Tencent’s market entry strategy here? It would be the fastest way for it to grow its user base in the region, and with a fresh pile of $2 billion projected for its initial public offering (IPO), it might not be that far-fetched. The question is, can Anghami survive or even thrive until then?

The Future of the Music Industry in the Mena Region

What is  most likely create longevity in the region’s music industry is not a powerful and affordable streaming platform, but a serious investment in Artists and Repertoire (A&R) and producing quality music from young and emerging artists. Labels in the region are only as good as their catalogues, with sizable dependence on 1960s and 1970s music. Artists are reported to sign “exclusivity” to multiple streaming services in the region, which, if true, means they are not a dependable partner in the long-term for these businesses. Artists also reportedly offer much higher margins than their Western counterparts, up to or above 50 per cent per stream versus 70 per cent and above retained by the labels in the West.

The region needs serious money to fund, invest in and nurture fledgling talent. It needs a platform that allows artists to monetise their audience effectively, and it needs a platform with a thorough catalogue for consumers. In addition to acquiring users, streaming platforms in the region need to acquire quality talent and build their proprietary catalogues. Otherwise, the platforms are only as good as their user experience, and user acquisition will be a race to the bottom in terms of margins, the winner being the party with the most capital.

So far, none of the aforementioned businesses have unrolled a substantial A&R strategy for the region. It may be on their radars, but true defensibility will only come as a result of a fruitful discovery and a direct to fan model for artists, in addition to a broad catalogue, and a healthy user growth and monetisation strategy.