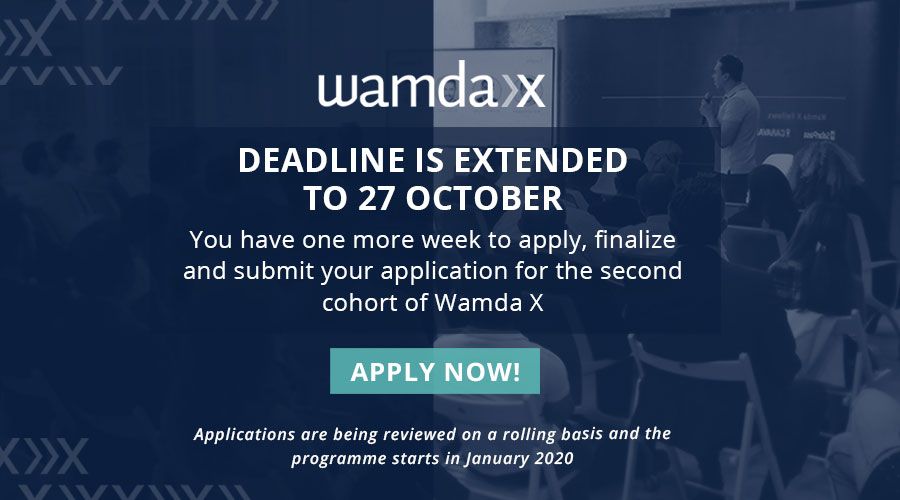 Wamda X, the grant-based fellowship programme for budding entrepreneurs and early-stage startups, is now accepting applications for its second cohort. The four-month programme aims to identify and support the Middle East and North Africa's (Mena) most promising entrepreneurs and founding teams in their early stages. The second cohort will start in January and will be based at the Wamda X space in Dubai.

“Recent research suggests that globally, investors’ focus has started to shift to later-stage investments,” says Wamda Capital Investment Principal Sarah Abu Risheh, who is leading the programme. “In the Mena region, investors’ appetite has increased since the Souq.com and Careem exits, which have each marked turning points in the tech ecosystem. The influx of global tech giants such as Amazon and Uber setting up in Mena over the past five years has also accelerated the region’s overall tech infrastructure.”

“Individuals are increasingly looking to leave their jobs and launch their own venture, but there is a growing mismatch between these aspiring founders and the number of investors willing to support them,” Abu Risheh says.

By providing investment, working space and access to the region's most notable mentors among other benefits, Wamda X aims to reduce the friction faced by entrepreneurs when founding a startup. “The funding gap faced by early-stage or idea stage investments is growing larger,” Abu Risheh says. “We have built the Wamda X programme to bridge that gap and support pre-seed entrepreneurs.”

The programme is divided into three phases: X START, X SOLVE and X SCALE, each designed to help founders reach specific milestones and to provide them with the right platform and tools.

Mentorship is a central element of the programme and fellows will develop a network of seasoned founders and industry-specific advisors. Fellows will also gain an immense amount of experience through multiple workshops and sessions curated for them at Wamda X, as well as the connections they will make with the wider Wamda network.

Successful applicants or "fellows" will receive a $30,000 financial grant with the option of follow-on investment of up to $100,000 from Wamda Capital. In addition, fellows will receive more than $10,000 worth of in-kind benefits in the form of subsidised access to software and support services.

Applications will be reviewed on a rolling basis throughout the month of October and fellows will be selected based on their ability to identify and solve market inefficiencies. The competitive programme is set to begin in January 2020.

The inaugural cohort, launched in the first quarter of 2019, successfully graduated two startups, SafarPass and Caravan from more than 600 applicants.