Life is returning to offices in the UAE and the wider Middle East region as workers go back to their desks wearing masks and attempting to maintain a safe distance from one another. While some have embraced the change of scene and in-person interaction after four months of lockdown, others are still reluctant to return fully to the office space.

In a survey conducted by Wamda, 60 per cent of startups in the region are now offering their employees the flexibility to work from home and the office, while 20 per cent have decided to implement remote working as their primary policy. This, in the Middle East would have been inconceivable pre-corona, but attitudes have changed, and the lockdown shifted notions of productivity, creativity and management.

“I was very much against working from home, the reason being I thought I would be unproductive because I have a family and children, but I’ve probably never been as productive,” says Hosam Arab, founder of UAE-based financial technology startup tabby. “It is very clear that people can be exceptionally efficient if they’re allowed to be working from home.” 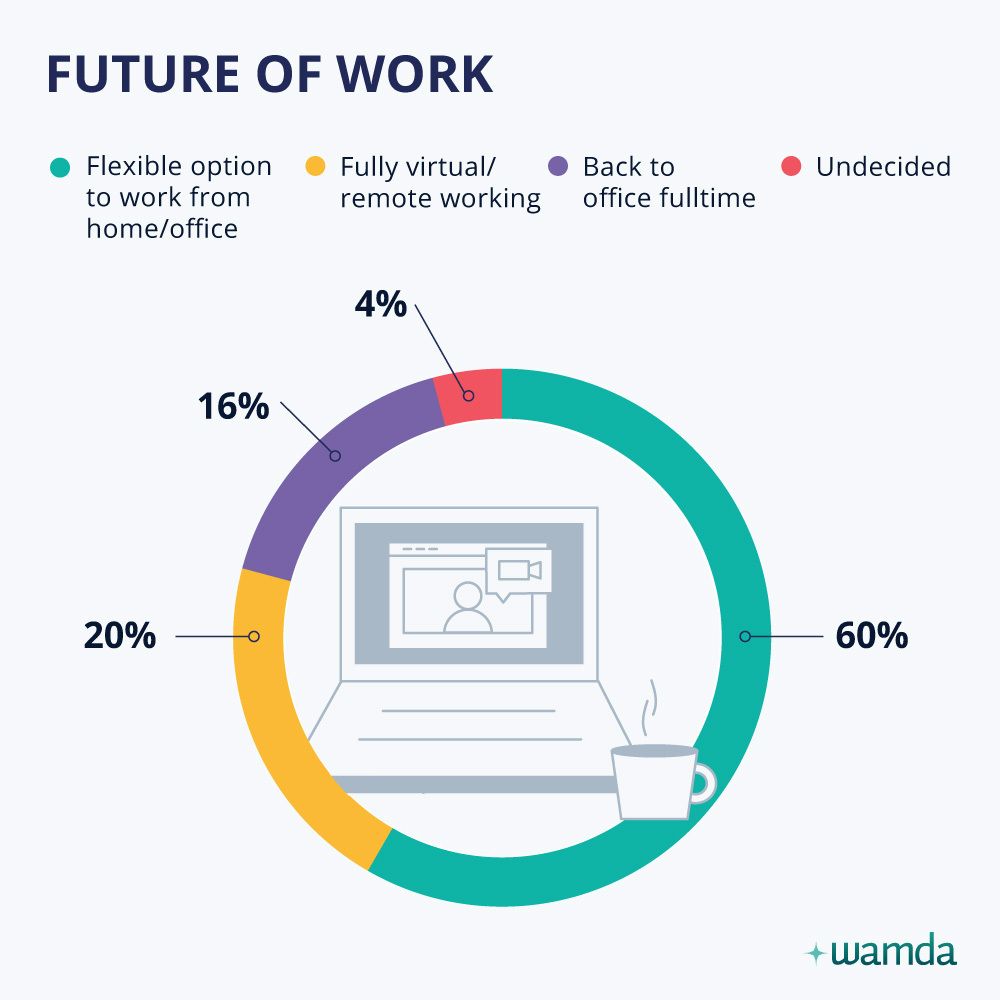 The advantages of working remotely are not only greater efficiency and more productivity, but easier access to a global pool of talent and a cutback in travel-related costs.

“We’re now definitely much more efficient, there is less time wasted from commuting to work, no one is late to a meeting,” says Mohamad Ballout, founder of Kitopi, a UAE-based cloud kitchen operator. “The only thing missing is how do we make sure we don’t lose on the culture side.”

Besides the loss or difficulty in maintaining company culture, there is also the risk of burnout.

“There is a cost [to working from home]. I’ve locked myself in my home and there is no barrier between work and home,” says Arab who believes that flexible working is only successful if the entire working day is spent either at home or in the office.

The hybrid approach of splitting time between home and office still requires an office. But paying rent for a space that sits empty several days a week seems frivolous, and so many companies have attempted to renegotiate their lease.

“With buyers and tenants in a better position to negotiate, we observed minor declines for sales prices in comparison with the previous quarter,” says Fibha Ahmed, director of sales at Bayut. “The average rental price per square foot also declined on average for office spaces in most of the popular commercial centres.”

In the UAE, the comparatively newer commercial areas such as Business Bay and JLT saw prices dropping by more than 6 per cent, while older, more established districts such as Deira and Sheikh Zayed Road stayed more or less resilient, with rents for offices dropping by less than 1.5 per cent according to Bayut.

Some companies, particularly those that reduced staff numbers, are opting for smaller facilities of less than 1000 square metres according to JLL’s latest UAE Real Estate Market Performance report.

“Looking ahead, we expect corporates to adopt a hybrid model of working, with some of their employees based in HQ offices, while others continuing to work from home, or in flexible office spaces. The game is changing and evolving rapidly, and we expect to see companies apply their own philosophy and ways of working based on business needs and staff comfort levels,” says Dana Salbak, head of research, JLL MENA.

But in several countries in the GCC, the visa quota for employees is calculated according to the size of the physical office space. In the UAE freezones, one employee visa is given per nine square metres of office space, forcing companies to maintain a physical location even if all their employees work remotely.

This regulation has exacerbated frustration felt among the startup community, particularly in the UAE where the cost of starting a business is among the highest in the world.

“I have to look for a new office, even though everyone is working from home. I cannot hire a fifth person because our current office only has space for four,” says Arab.

It is a contentious issue, particularly in the UAE where real estate is such a crucial part of the economy. Changing the regulations to enable companies to hire without the need for a physical office space could have a disastrous impact on the real estate sector.

But according to Hamza Khan, founder of co-working company Letswork, “there are plenty of options”.

“Startups and SMEs, who traditionally only opted for offices in the first place for visa requirements will be evaluating their options as they try to reduce overheads and the government introduces reforms to business licensing,” says Khan. “This is great news for co-working operators as the office space demand moves towards short-term, flexible and 'plug & play' solutions that companies like Letswork readily provide.”

Even the freezones in the UAE are adapting to the shifts in working behaviours.

“Work is better done when done collaboratively and physically. More and more people are preferring to be in the office and now it’s accepted to be able to have that flexibility,” says Katrina Anderson, director of commercial services at twofour54 in Abu Dhabi. “You won’t move away from having an office, we will get more and more people into a community.”

Twofour54 is creating co-working and community spaces at its new campus in Yas Island in Abu Dhabi, while the Dubai Multi Commodities Centre (DMCC), is focusing on incubators and accelerators to attract startups and claims to be more flexible with regards to visa allocation.

“Depending on the nature and size of your office, you get a standard visa allocation, having said that we’re flexible and it is not a rule set in stone, we understand that there are certain businesses that can operate without needing as much space,” says Ahmad Hamza, executive director - Free Zone, DMCC.

The push towards shared and co-working spaces has given rise to software as a service (SaaS) startups that facilitate their booking and backend functions.

One such startup is UAE-based Hotdesk which allows users to book co-working spaces and meeting rooms. The company has seen rapid growth during the pandemic, expanding to 49 cities around the world over these past few months, up from fewer than 20 cities at the end of 2019.

“It has picked up in many different ways and customer segments,” says Mohamed Khaled, co-founder and CEO of Hotdesk. “Freelancers and startups are born during recessions, freelancers are on the rise and there is a push to more growth in co-working spaces.”

The supply side has also increased by 60 per cent according to Khaled, driven mainly by the empty meeting rooms in large offices.

“Another factor is corporates, they had these mega large offices, everyone was required to come in all the time, now the corporates themselves have three problems – expensive leases that cannot be changed, they’re still not using the rest of the space, they’ve fired people so there is even more extra space and they’re not making enough revenue so it is another reason to hate the lease,” says Khaled.

Even prior to the coronavirus, the amount of unused assets in the GCC was "substantial" according to Chris Cooper, co-founder of aceplace which focuses on booking unique spaces for companies and individuals.

“Owners of assets were not fully utilising them and we noticed more and more people were looking for that flexible working environment. What Covid-19 has done is accelerated that demand,” says Cooper.

Demand may be on the rise, but until the employee visa laws change, companies that employ more than two or three workers will still have to lease out an office, adding to the burden of costs.