The UAE was ranked top in the world in the 2021/2022 Global Entrepreneurship Mentorship (GEM) report in terms of countries that allow for better ease of doing business ahead of both The Netherlands and Finland. Saudi Arabia ranked fourth in the rankings while Sudan ranked last in 47th place.

“The United Arab Emirates is the only economy to have scored as sufficient or more for all framework conditions. These changes are the direct result of policy adjustments that have moved increasingly to promoting business conditions for entrepreneurs,” the report explained.

The latest edition of the global report, which was released on Thursday at Expo 2020, surveyed 2,000 respondents across 47 countries, including the UAE, Saudi Arabia, Egypt, Sudan, Morocco, Qatar and Oman.

The report pointed to the increased appetite of people in the Middle East likely to pursue entrepreneurship, and that they remain confident that they have the skills and knowledge required to launch their own ventures. Wealth generation remains the main driver for entrepreneurial activity across the world, but especially in the lower income countries of the Middle East. 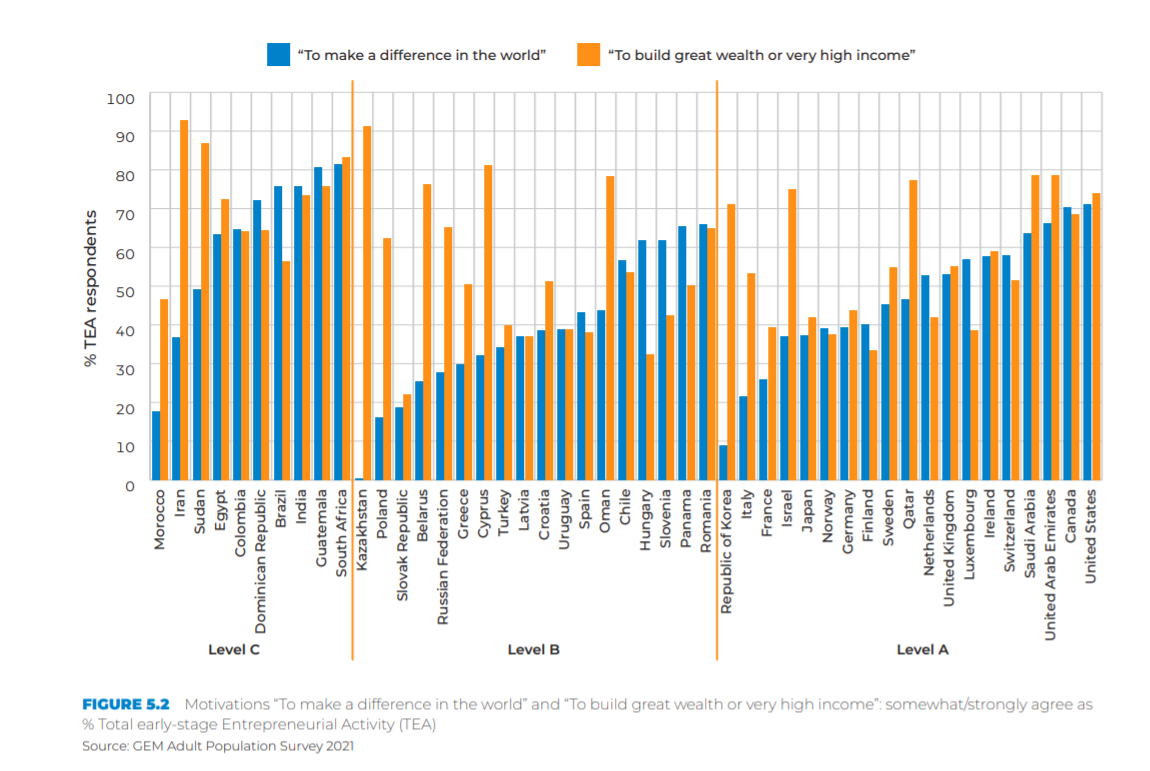 A large chunk of the respondents revealed that the process of setting up a business has become more daunting than it was a year ago. While respondents in the UAE and Saudi Arabia said that it has become easier to start their own business when compared to the past, the majority are less likely to launch their own ventures over the coming period. Of the seven Arab countries surveyed for the report, the UAE and Saudi Arabia have the lowest score in the "entrepreneurial intentions" indicator due to fear of failure, which remains the key deterrent and number one reason why young people and adults alike are reluctant to pursue entrepreneurship.

To counter this prevailing lack of enthusiasm, the report recommends that more spotlight should be put on impact-driven startups that have made notable strides to serve as inspiration to the wider population.

Overall, the Middle East region has seen a spurt of startup entrants and a notable uptick in the total early-stage entrepreneurship (TEA) levels over the past couple of years thanks to the growing need for digital technologies sparked by the Covid-19 pandemic.

But, the impact of the pandemic has varied in intensity in each of the region’s ecosystems. The report highlighted that countries like Egypt, Oman and Qatar witnessed a rise in the number of startups exits (which includes failures) and lower levels of TEA, as these countries continue to grapple with the economic fallout of the pandemic.

While the notable increase in the TEA levels indicates a growing bullishness regarding the tech industry, these ecosystems require more later stage startups to promote maturity.

The report also mentioned that the early stage companies outnumber their counterparts at later stages of development, adding that new policies should be put in place to fast track startup progress to accelerate their organic growth and increase their share and contribution to the overall gross domestic product (GDP).

Despite the progress made, the report further states that startups are still faced with poor access to finance, red tape bureaucracy and policies that discourage entrepreneurship.

Regionally, Qatar came out on top in terms of the countries that facilitate better and enhanced access to credit for startups and small businesses, followed by Oman, while Egypt’s score was the lowest.