Three months after the first protest in Tahrir Square, aspiring entrepreneurs transmuted optimism into innovation at Startup Weekend Cairo, where the best instrument for change was a good business plan.

In the wake of a revolution in which a few organizers-or even a few websites- seemed to galvanize the masses, it’s no wonder that some of Egypt’s brightest developers assembled at Startup Weekend Cairo this past weekend to accelerate native business creation. A team of nine organizers followed the Startup Weekend model, assembling aspiring entrepreneurs to pitch ideas, vote on the best ones, organize, and develop fledgling startups, all within 54 hours. But it was clear at Startup Weekend Cairo that teams weren’t just crafting the next must-have iPhone app- they were forging a new vision of economic development in Egypt. 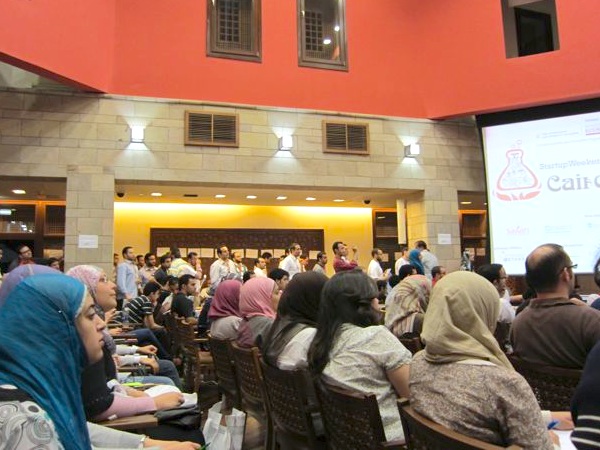 Attendees watch the initial lightning round of pitches.

“Egypt 2.0”, a term coined to describe the country after Mubarak’s departure, seemed a fitting moniker as attendees pitched ideas focused on websites and mobile applications. Boys in t-shirts referencing Foursquare and HTML ("</body>" was one notable joke), and girls adorned in fuschia and turquoise headscarves brainstormed furiously. Some toted iPads and murmured about how much market share the rumored Android tablet might soak up. As they honed ideas with mentors well past sunset at the terracotta-hued American University of Cairo campus in New Cairo, it was clear that the optimism of Tahrir had found a new outlet.

One idea, 7el.me, meaning “dream” in English, offered a platform for posting, voting on, and hopefully funding your dreams. An idea this idealistic may not have had traction just a few months ago, as Hady Ahmad, a developer working on freelance design feedback platform Tabshoora, explained. “Before Tahrir, we used to think, ‘That is idea is so big, we can’t do it.' But right now everyone says ‘Ok, that idea is big, but we can start small.’ That’s the difference.“

For some, the shift brought more peers on board. Hend Ismail, a young woman developing a 3D indoor navigation application- a “Google Earth for buildings"- described, “When I was in college, I wanted to have my own business. A few people said, ok, maybe. But now, everyone around me is talking about having their own business. There’s more competition out there, which is good.”

Even for a seasoned veteran like Bo Burlingham, the Editor-at-Large of entrepreneurship magazine Inc., the buzz was palpable. “There’s an energy here that is very addictive. I come here thinking that I’ll leave by 6pm, 7pm, and I end up leaving at midnight.”

Fortunately for Startup Weekend, Cairo, that buzz catalyzed a deluge of financial support. “Before the revolution, many companies were reluctant to host such an event,” explained organizer Mohamed Adany. But afterwards, everybody was willing to help support us as part of a mission to help build the new Egypt.”

As support flooded in, from sponsors like Nokia and partners like National Net Ventures, Startup Weekend Cairo’s challenge became maintaining its agile size. “After we opened our registration, we did not even announce it," Adany recounted. "Yet 150 people registered in 3 days. We had to cancel our offline advertising campaign. We ended up with a total of 450 people registered, but we could only take 200. The momentum started, and it has not stopped.” 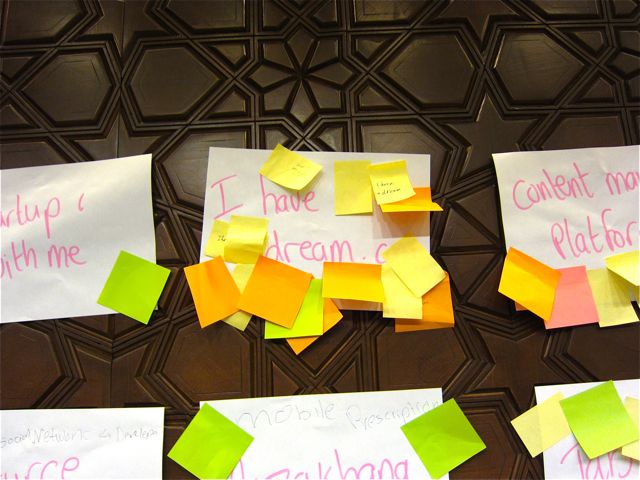 Attendees voted on the ideas pitched in the lightning round.

If the momentum post-Tahrir is predominantly psychological, as some allege, the question looms as to how to effectively harness this spirit to effect real change. As unemployment and inflation rise, while business in the key sectors- including tourism and construction- plummets, the country’s need to translate public empowerment into tangible vehicles for economic development cannot be underestimated.

Yet Startup Weekend’s success lies in its ability to do exactly that. Not only has it converted idealism into over 100 jobs in 30 countries since 2009, but its biggest impact lies in creating communities that can sustain job creation. “Our model is designed to create viable businesses that grow after Startup Weekend. The idea is to create small teams with enough sense of ownership that they are incentivized to continue work on the project,” illustrated co-founder Clint Nelsen.

Organizer Adany echoed the importance of this model in Cairo. “Startup Weekend is ultimately about bringing a community of entrepreneurs together. This kind of gathering of bright, like-minded people never happened in Cairo before.”

And this nascent community has its sights set on some of Egypt’s most pressing problems. One development dynamo, Mona Rabie, gathered the biggest team at the event to work on a platform connecting government entities with professionals and third-party funders, in order to facilitate training for new government staff. “Civil society organizations in Egypt were previously very restricted," she explained.
"Now they’ve had a huge space open up, yet they all desperately need training and people. That's the issue we're addressing." 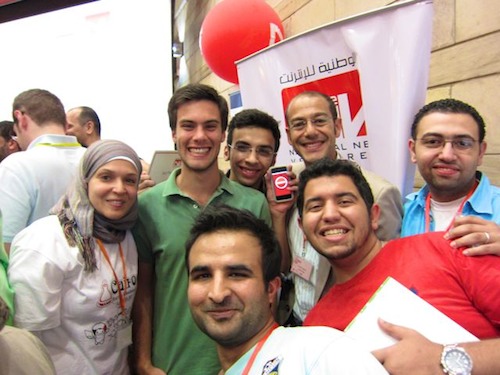 Aside from beginning the slow work of rebuilding Egypt’s economy, Startup Weekend may have an unexpected side effect: rebranding change so that it does not pose a threat to authority, but rather becomes its greatest ally. Founder and CEO of Aramex Fadi Ghandour described, “Private enterprise here has been deeply associated with the previous, non-functioning system. There is a danger that entrepreneurship has become a bad word. This issue should be addressed carefully by the entrepreneurs themselves. Events like Startup Weekend can legitimize entrepreneurship and demonstrate that it’s essential.”

For the winning team, demonstrating the social value of startups came naturally. Inkezny, a mobile platform that will immediately connect its users to the nearest hospital in any country, will address immediate social challenges in Egypt, while aiming for a global market. Each of the top six teams received a cash prize, starting at 5,000 EGP; yet for Inkezny, their prize of 10,000 EGP (about $1600 USD) was not as valuable as their bond. “Without a team, it can never happen, because execution is not about the idea or the individual,” noted leader Marwan Roushdy.

With OffersMap- a mobile app displaying location-based deals- winning second place, and 7el.me taking third, startups are on their way to creating a culture of entrepreneurship that both sustains economic development and generates social value in Egypt. The journey may be a long climb, but at Startup Weekend Cairo, the next generation of entrepreneurs proved that they've taken the first step.

Aramex CEO Fadi Ghandour's 10 Rules for Being a Successful Entrepreneur