Never mind that everyone here at Berytech is sleep-deprived and on the brink of collapse. We are all a bundle of statements. 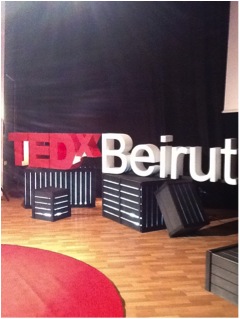 It’s one thing to tell the story of a 15-year-old homeless boy in Beirut through the web. Remembering our first love every Ashoura is a completely different thing. Somehow, though, they just collide, win an Emmy, and make us hear all about it at TEDx.

Speaking of things that collide, and things that could only collide in the Arab World, the effectiveness of a text message. Who would’ve thought that one text, “100Mbps connection, Ali Jaber, Thank You,” could end up creating the most powerful school of media in the Arab World? The text, by the by, was sent to one of thousand princes in Arabia. Shukran Dubai! 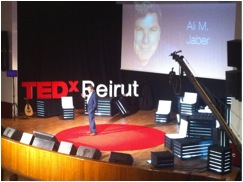 Then comes the same guy whose beer you drink every night, from 961 Beer, telling you that your favorite beer was conceptualized during the war… Doesn't even matter which war he was talking about, because we’ve lost count of them. But anyway, it’s good to know that man made beer before he made bread.

Now think Oud, then think electronic, manipulated, developed musical instrument (or tuner, whatever makes you happy) in the shape of a Oud. In between these morphed notes, Bassam Jalgha talked about the fact that each and every one of us has a bright idea and how more effort to developing and supporting these ideas should be made. 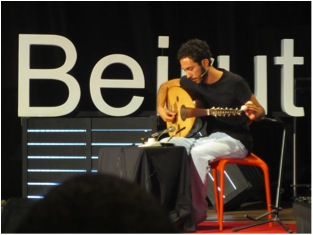 Speaking of our bright ideas, the TEDx organizers had the bright idea to put an “Idea Wall” in the “Social Space” (basically the space that is not the auditorium). One guy had written “Yeraz” – meaning dream. Interestingly, this was put as an answer to the bright idea question of what holds us back. As we rush back into the auditorium after this, we see a girl holding her $20 Moleskine notebook that has “I need a job, talk to me”  written all over it. 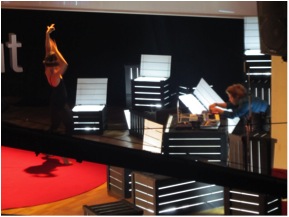 Absurd is what it is. From an ‘improvised conversation’ between dance and music (not dance music) on stage, to “bad grammar” as an answer to “What Inspires You,” TEDxBeirut is absurd. It is the unorganized chaos, the being late and starting late, it is everything that makes Beirut Beirut. And Beirut rocks your world.