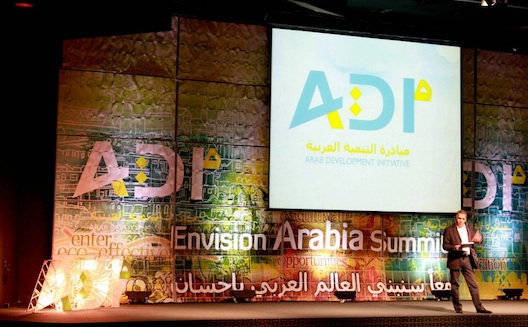 This past weekend I attended the Arab Development Initiative’s (ADI) Envision Arabia Summit in Montreal, Canada.

The Envision Arabia Summit (EAS) aimed to “[b]ring together ambitious and talented youth for a weekend of inspiration, engagement, and action” centered around the development  of the MENA region. With over 500 attendees, a hundred from outside Canada (including Egypt and other Arab countries), the summit was a great platform for the exchange of ideas about development.

(Full disclosure: Although I was not one of the initial founders of the ADI, I did provide direct assistance and support to the organizing team before and during the conference).

We were inspired by Dr. Naif Al-Mutawa, creator of The 99, who told us that “it is only when the impossible becomes perceived as possible that change can occur.”

Khaled Sabawi, the founder and president of MENA Geothermal also woke us up to the possibilities for change, and Dr. Farouk El Baz of NASA, drilled into us the importance of instigating development at the individual level.

There was plenty of deliberation, debate and discussion. I was especially impressed by the delegates in the workshop on Curriculum Reform and Education Policy, which I moderated; they passionately brainstormed solutions to obstacles for over three hours.

And yet, the question I constantly receive- and have asked myself since- is, “So what? How is this conference useful?” And by extension, what makes a gathering or conference with broad goals truly useful?

I have two responses.

First, bringing like-minded people together is one of the best ways for generating good ideas. In the words of Steven Johnson, author of Where Good Ideas Come From, “good ideas come from the collision of smaller hunches.” In his words, it’s essential to create “systems that allow hunches to come together and be greater than the sum of their parts.” The Envision Arabia Summit was a great platform for the collision of such “hunches.” The collision of these “hunches” has continued after the summit and they are forming into fully-fledged ideas on the summit’s participant group online.

Second, it is important to encourage active discussion and ownership of the region’s problems. In the words of Justin Kan, founder of Justin.tv, “[b]ehavior is a virus. We spread our behavior to those around us, whether passively or on purpose…. Given enough exposure to a behavior, that behavior will become normative.”

EAS encourages the behavior of actively thinking about the region’s problems and creating solutions to them. The dissemination of more similar events, even on a smaller scale, in region, has the potential to contribute to “hacking” the MENA culture, creating a community where pursuing solutions to daily problems is the norm.

Yet in spite of the ways that ADI contributed to building this kind of community, it still has a ways to go. While it generated a lot of enthusiasm for development and positive energy among the youth, it must present a way to translate these ideas into action in order to harness this energy for ongoing change.

The ADI must take inspiration from initiatives that operate with a bias towards action such as Startup Weekend and the Clinton Global Initaitive and avoid reinventing the wheel as much as possible. It should take this approach whether it chooses to carry out development projects itself or serve as a crowdsourcing platform that facilitates projects.

What I propose is not a simple task and is in fact quite daunting. Yet I am quite hopeful. Towards the end of the seminar I attended, one of the delegates posed a question that sounded something like this: “How did the fall of ‘what’s his name’ impact the dynamics of idea generation?”. Yes, that’s right, we’ve relegated the statues of our leaders to “what’s-his-name.” Give way for a new Middle East.