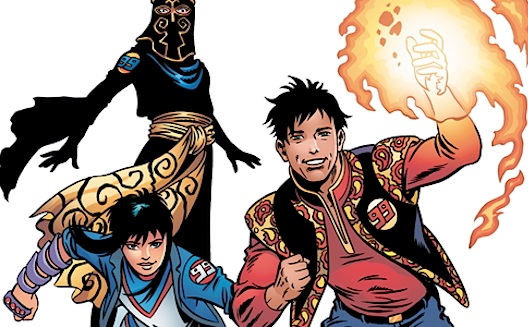 In the context of protests for greater equality occurring around the globe this weekend, it seems fitting that a film has debuted chronicling The 99, an Islam-inspired comic book series focusing on community, tolerance, and compassion.

Isaac Solotaroff's "Wham! Bam! Islam!", which shows in New York and L.A. tomorrow night on PBS, depicts the behind-the-scenes story of Kuwaiti psychologist Naif Al-Mutawa's fight to spread positive narratives about Islam while meeting with resistance from the religious establishment at home and Islamophobic groups abroad.  As Al-Mutawa discusses his journey, as well as The 99's recent release of its own feature length film, his words come quickly. He, like protestors, is not interested in self-censorship.

The 99, first published as a comic book in the Middle East in 2006, features a team of superheroes who work to spread hope and fight evil with superpowers determined by supernatural “Noor (Light) Stones.” Inspired by the 99 attributes of Allah, the series is one part X-Men, one part Captain Planet, and fully aimed at depicting Muslim culture in a positive light.

While the project immediately met with support in the U.S., it has garnered suspicion in the Arab World for its adoption of religious themes. Its goal, is to focus on human rather than religious elements, however, says Al-Mutawa. “I wanted to create supernatural characters that aren’t necessarily God-like but are very human. Overcoming their dark elements is a process we all relate to. We are creating something inspired by religion rather than being religion.”

Taking funding from an Islamic bank lent the project more legitimacy in the Arab World, and yet then caused fear in the U.S. that Al-Mutawa is trying to “Islamify” youth. At the pinnacle of The 99’s success this summer, as he prepared its launch as an animated TV series in the U.S., a sudden rise of Islamophobia forced him to delay.

Andrea Peyser of the New York Post urged the cancellation of the series, writing, "Coming soon to a TV in your child's bedroom is a posse of righteous, Sharia-compliant Muslim superheroes