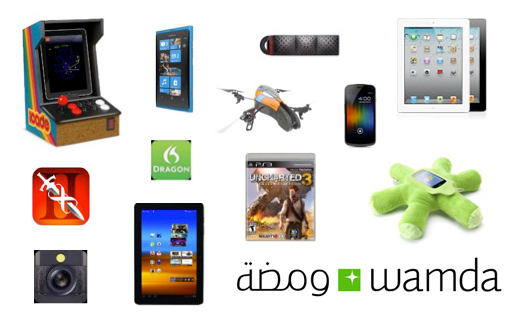 The holiday season is coming in a few weeks, and as usual this means it's time to indulge yourself and your loved ones with gifts. Whether you plan on spending big or small, buying local or abroad, here are some gadgets that we thought were cool in 2011.

Here we've listed the price in U.S. dollars when known, as well as where to buy and some shipping options if you are buying from abroad.

Also, each of these items are tweetable- you can click the "tweet" link next to let your friends and family know you've mentally added it to your wish list. Enjoy!

iPhone 4S: ($800-1000) One of the most powerful smartphones on the market boasting beautiful graphics and a dual core processor as well as a powerful 8MP Camera. The vast array of applications should make this a very attractive option for users of all ages. [tweet]

Samsung Galaxy S2:  ($770) Another powerful phone with hardware specs that rival those of the 4S. This phone runs on Android and has a large screen coupled with an elegant, slim and light body. [tweet]

Google Galaxy Nexus: ($600, U.S. only) Google’s new flagship phone and the first to boast the new Android 4.0 with features such as Face Unlock and Android Beam, this should become a cult favorite among Android fans. [tweet]

Blackberry Bold 9900: The first Blackberry to mix the best of both worlds with a touch screen and a qwerty key board. Add to that some top specs (8GB storage , 1.2 Ghz Processor) and this is one of the most powerful Blackberries on the market as well as the thinnest. [tweet]

iPad 2: (Starting at $500) The number one tablet on the market, the iPad 2 is good for games, work, browsing and communicating. This is a no-brainer for those who like to play it safe. The fast processor helps too. [tweet]

Amazon Kindle Fire: ($200 on Amazon.com) Amazon’s first tablet may not have killer specs but at $200, it’s a steal. Access to millions of videos, music, apps and books as well as an attractive interface make this tablet a good low cost alternative. [tweet]

Blackberry Playbook: (Starting at $500) RIM’s first tablet ensures fast browsing and multimedia playback as well as high portability and business-ready apps. The Blackberry Bridge option allows you to link the tablet to your BB phone and receive phone services on the tablet’s screen. [tweet]

Samsung Galaxy Tab 10.1: (Starting at $500) Samsung’s flagship tablet runs on Android 3.1 and boasts a 2Ghz Tecra processor and 1GB Ram as well as an extra thin body and dual cameras with a high res 10.1 in screen. [tweet]

MacBook Air: (Starting at $1000) One of the thinnest and lightest and fastest laptops available on the market. Available in both 11” and 13” screens with flash memory that guarantees rocket fast performance. Excellent for the business user. [tweet]

Sony Vaio F Series 3D: (Starting at $1900) This Laptop is a multimedia powerhouse containing a 3D 16” screen along with a Blu Ray Player and Burner, making it the ideal choice to watch the latest blockbusters. The basic 640 GB of Hard Drive and 6GB of Ram don’t hurt either. [tweet]

Alienware M14X: ($1400) For gaming fanatics only. This laptop holds ultra powerful specs such as 2.4 Ghz Dual Core processors, 750Gb HD and 8GB Ram to make sure your latest stroll in the World of Warcraft goes smoothly and uninterrupted. [tweet]

Skyrim (PS3/Xbox 360/PC): One of the biggest and most immersive role-playing games ever; forget real life as you go hunting for dragons and accomplish quests in an immense open world. [tweet]

Call of Duty Modern Warfare 3 (PS3/Xbox 360/PC): This frenzied first-person shooter game has you hopping around the world and accomplishing various missions at a hectic pace. A strong multiplayer component is included too. [tweet]

Uncharted 3 (PS3): An action/adventure game that blurs the line between gaming and a Hollywood blockbuster. Voted PS3 game of the year. [tweet]

Batman Arkham City (PS3/Xbox 360/PC): Play as Batman in this intense action game and use his cutting edge gadgets as you beat your way through hordes of criminals in Gotham City. [tweet]

Fifa 12 (PS3/Xbox 360/PC): The best soccer game has been improved with a new defensive system that has added depth to gameplay. Pick your team and challenge the opposition, whether online or offline. [tweet]

Infinity Blade 2 (Apple App Store, $7): The follow up to the most popular iOS game been released with a bigger world, improved combat and most probably the best graphics on any mobile-based game. [tweet]

Angry Birds Seasons (iOS and Android, $1) : The most popular mobile game has just received an update to coincide with the holiday season. 25 new winter-themed levels have been added. Fun for the whole family. [tweet]

Hipmastatic (Apple App Store, $2): This cool camera application allows you to add effects to your photos by selecting from a variety from films and lenses, often with a vintage effect. [tweet]

Groove Coaster (Apple App Store, $3): An excellent music app that is gorgeous, thrilling and challenging. This rhythm game will put you in a party mood while challenging you to keep up. [tweet]

Contre Jour HD (Apple App Store $3): The winner of many awards, this puzzle game with beautiful graphics and a fun soundtrack puts you in conrtol of a creature that you link to its environment to navigate. Think of it as a mix of “Cut the Rope, “World of Goo,” and “Loco Roco.". [tweet]

Pulse Volume One (Apple App Store $3, iPad Only): Another music game, again with sublime graphics and soundtrack. It pushes you to use fingers from both hands in order to stop the different pulses travelling around the circles. Challenging but beautiful. [tweet]

iMovie: (Apple App Store, $5): This App allows you to create and edit your own movies from existing videos, photos, music and sound effects. This App will let you express your inner director. [tweet]

Evernote (Apple App Store, Free): This award winning app lets you create notes and put everything that is in your mind on your device and then sync with Evernote on your other devices. A must-have app for staying ahead of the game. Evernote has also released Evernote Hello and Evernote Food, new apps that you may want to check out that help you connect with and remember people you just met, and store recipes and remember restaurants. [tweet]

Dropbox: (Apple App Store, Free) Dropbox is a free storage service that allows you to access your photos , videos and files everywhere. Install it on your computer, drop your files in the box, and you can access them everywhere. A must-have for small businesses. [tweet]

Dragon Dictation: (Apple App Store, Free) Tired of typing mails and SMS, Dragon Dictation is a voice recognition software that allows you to speak and see instantly your words transformed into text. It’s much faster than typing. [tweet]

Jawbone Era BlueTooth Headset: (130$ Approx) This is one of the best Bluetooth headsets on the market, built by a company co-founded by a Lebanese entrepreneur. It has noise cancelation, HD Audio, and motion controls to go with it. [tweet]

Parrot AR Drone ($300): This Quadricopter can be controlled by both iOS and Android devices. Play augmented reality games against friends and fly indoors or outdoors by adding protection to the lifts. [tweet]

Griffin Woogie ($25): This is for the younger ones. Part plush, part iPhone case and part media player, this gadget ensures kids can enjoy playing with an iPhones without breaking it. [tweet]

Angry Birds Knock on Wood Board Game ($33): Ever wondered what Angry Birds would feel in real life? This board game might be your best betfor that; build structures and then launch your birds to destroy it. Simple fun for the family. [tweet]

Seagate Goflex Wireless Drive ($120 for 500GB): This hard disk is equipped with a wireless transmitter. Plug it into your computer and fill it, then download the application on your phone or tablet, and you can instantly stream your music and videos to your devices. [tweet]

iCade ($60): This Cool Gadget allows to turn your iPad into a retro Arcade cabinet and play old school games such as Pac man and Space Invaders. Atari has made 100 classic games available for $15. [tweet]

Most electronic items should be available at your local dealer. Prices displayed are mostly U.S. prices; local prices could be a bit higher. Amazon.com has all the items displayed, some at discounted prices; however you may want to take into account delivery prices and time as well as custom clearance.

An easy way to have things shipped is also to go through DHL or Aramex’s Shop and Ship, which allow you to easily ship items to a U.S. address, from which they forward the package to your address in this region. Custom charges might still apply.

While the possibilities for gifts are endless and your tastes are varied, we hope this helps you round out your holiday shopping list. Let us know in comments if there's anything else that you would recommend. Happy Holidays!