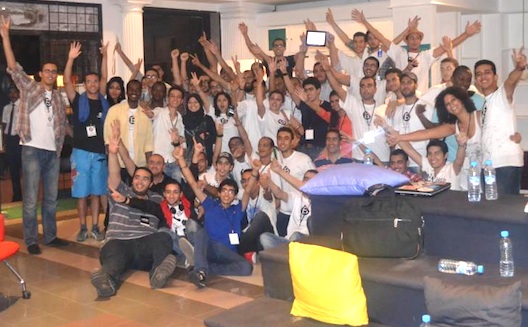 Last week was an exciting time for all mobile Moroccan entrepreneurs and developers as it happened to be the BeMYApp WeekEnd Morocco!

Organized in the first co-working space in Morocco called iNSANE! (إنسان) by evento, a young startup specialized in the organization of events around the web and digital, the BeMyapp Weekend is a 3 day mobile app development competition aiming to build successful startups by fostering the encounter of various people and profiles among them idea holders (called “idea generators”), developers, designers, and people with specific abilities (called “super powers”).

The concept of the BeMyApp weekend is simple, and similar to Startup Weekend, with a global competition twist. Every registered idea generator has 1 minute to pitch a mobile application concept to a specialized jury on the first day (Friday, June 29th this time). The jury is composed of people with mobile/tech/digital and entrepreneurship backgrounds who select the best mobile application concepts, around which teams are formed. The best ideas will be developed during a full 48 hour marathon weekend of designing, business modeling and coding. On Sunday in every country, each team presents its mobile application to its jury, which nominates the best local mobile app. Then the four finalists from Brazil, Belgium, Morocco and Tunisia enter 48 hours of online public vote.

The winner, announced on July 5th, was mobile app “Taxi Counter,” from Morocco which won this BeMyApp World Cup.

As a member of the Moroccan jury, I was really impressed by the quality of each idea presented and the ability of each team member to work quickly together and deploy their concepts. Taxi Counter is a mobile app that meets the needs of hundred thousands of people not only in Morocco but also worldwide. Thanks to Taxi Counter, people that own a smartphone and take a taxi will be able to estimate the fare of each of their route.

I also emphasized to the jury, as well as the Taxi Counter team, the importance of integrating social media features to create a worldwide taxi user community (imagine a social network of taxi users in the world!) sharing tips, rates and recommendations. I personally think this idea has a future and especially in our MENA regions where the use of taxis is very important... Good luck Taxi Counter!