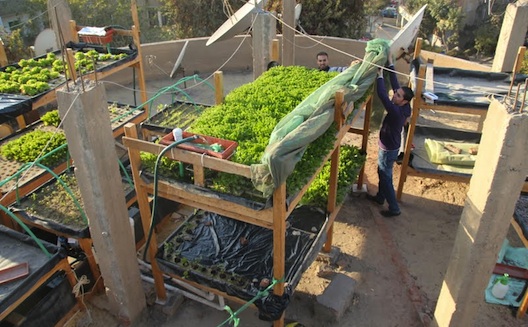 In Cairo, two brothers are taking inspiration from an ancient irrigation tool to bring food security and self-sufficiency to low-income communities.

Last year, Sherif and Tarek Hosny launched Schaduf, a rooftop farming enterprise designed to empower and sustain Cairo’s low-income communities. The Arabic word “schaduf” refers to an ancient irrigation tool, still used by farmers in many countries today, which lifts water to irrigation canals for harvesting crops. In this case, the Hosny brothers’ Schaduf works to lift soil-less hydroponic farming to the rooftops of urban Cairo.

Schaduf works with low-income Egyptians living in the Maadi district of Cairo and is developing a reputation for generating social good through simple innovation, both elements that earned it a spot among 14 finalists in the MIT Arab Business Plan Competition this year.

From Cairo to Louisiana and Back

Originally from Egypt, Sherif and Tarek Hosny volunteered in New Orleans after Hurricane Katrina, in 2010, where they witnessed the unique practice of soil-less hydroponic farming. The technique uses a mineral nutrient solution in water to grow plants in containers without soil. “It was eye-opening that you could grow crops and fish in the same environment … Once we saw that, we couldn’t just ignore what we saw,” explains Tarek.

Both holding engineering degrees, Tarek and Sherif together developed Schaduf to empower Egyptians to use otherwise unused space to improve their livelihoods. Though not farmers by training, their combined business and engineering backgrounds enable them to develop Schaduf’s vision and business model, says Sherif.

Schaduf uses proven practices to streamline and simplify rooftop farming, to create the maximum impact in these communities. When modifying the technology for Egypt, Sherif notes that the biggest hurdle was changing the community’s mindset. “The idea that you can grow plants on rooftops is something that is culturally strange, so that was a bit of challenge. But after we had examples, the whole thing became easier.”

Schaduf has a simple business model. They begin by selling rooftop installations to low-income families through repayable loans while contracting construction of the mini rooftop farms to a manufacturer who completes the installation in as little as one day. A small portion of monthly crop sales goes toward repaying the loan, which farmers are typically able to repay within one year.

To make certain that crops meet existing demands, Schaduf carefully monitors the local markets each season and recommends crops to grow to generate the healthiest harvest with maximum return.

Families keep roughly 10 percent of the crops grown for personal consumption; Schaduf purchases the remaining crops, reselling them to local markets at a profit for the farmers.

In general, grants are not enough to promote economic growth, according to Tarek. “You need to make people want the product,” he says. By incentivizing farming through loans, Tarek explains that Schaduf will be able to increase the effectiveness of rooftop farming beyond grant-based efforts by governments and NGOs.

When farmers have a stake in the success of their farms, they are driven to provide a return for themselves, for their families, and for Schaduf, which provides customers with a sense of independence, dignity, and personal achievement, in stark contrast to traditional aid programs that often leave consumers feeling dependent and unmotivated, he says.

Schaduf also experimented with other rooftop farming techniques and found that simple procedures yield the best results. Focusing on simplicity has also allowed the enterprise to overcome some of the trust issues that occur between new ventures and low-income customers.

A Matter of Trust

When first launching any new venture, it is critical to build trust in your target community and to identify those most willing to take a risk to join the endeavor. The Hosny brothers, themselves originally from Maadi, initially faced a few challenges.  Many in Cairo’s low-income communities were initially resistant to taking out loans due to ongoing financial insecurity.

However, those who survive on a day-to-day basis are more keen to recognize the benefit of a rooftop farm and are more ready to take the risk of starting one, says Tarek, compared to those with a university degree who often seek safer or more traditional paths for income.

For those who do come on board, the enterprise offers more than just heads of lettuce; it offers a chance for a sustainable income, motivated communities, and a brighter, greener future for urban Cairo.

With simple innovation, Schaduf brings a fresh twist to an ancient practice that may help resuscitate the Egyptian economy once again.