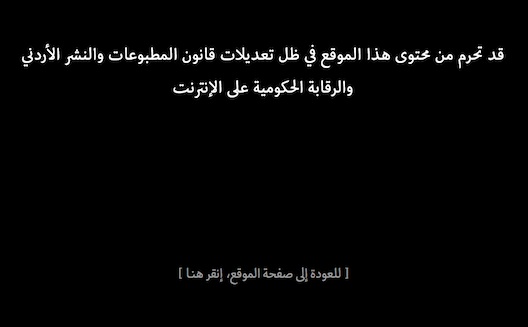 In hopes of discouraging the government from passing amendments that enable censorship, digital activists in Jordan are staging a country-wide internet blackout tomorrow.

The new policy, which has been drafted by the Ministry of ICT, includes two articles that sources say will strongly hinder local media, entrepreneurship and development in the country, and it's set to pass this week.

The major threats are twofold: first, the amendments would force every single website to register with the Journalism Syndicate, which would potentially subject it to assessment of whether it is consistent with"Jordanian culture," sources say.

Secondly, the law would make website owners liable for the content posted in their comment sections. Any comment deemed offensive could incur fines some say are around 10,000 JD (US $14,000), which could immediately shut down a web-based startup. The daily cost of moderating a website, not to mention an entire community of user-generated content like those on famous Jordanian pioneers d1g or Jeeran, would quickly become astronomical.

It's clear that the censorship would be not just a black eye for Jordan, but a death knell to its booming tech entrepreneurship scene, and a dark moment for the entire region's entrepreneurship ecosystem.

For now, what's on the table is only a policy change. From there, the country's Press and Publication law could be changed, as it's dependent upon the ICT policy, yet the process is long. "This policy won't be presented to Parliament anytime soon," says Jordan's ex-ICT Minister Marwan Juma. It has to pass Cabinet and then through both the lower and upper houses of Parliament, and it's likely the country will see a dissolution of Parliament before that happens, he says.

When the ICT Ministry changes its policy, it has to consult the private sector. Initially, the ministry demanded a response from the private sector within 24-48 hours, says Juma. But after seeing public outcry, the government extended the deadline for private sector comments to this Thursday, August 30th.

For some, like Naseem Tarawneh of popular blog The Black Iris, these processes are merely details; censorship in Jordan seems inevitable. "Someone, somewhere, is convinced that Jordan’s online news sites need to be controlled, and that’s that," he summarizes with a resounding sigh.

For many, however (well, including Tarawneh), now is the time to strike. In the spirit of the SOPA Wikipedia blackout, new site 7oryanet is encouraging a blackout tomorrow, Wednesday August 29th to raise awareness about the amendments before the deadline.

Thus far, over 200 of Jordan's most prominent web companies, tech support vehicles, and media companies, including Oasis500, Syntax, Akhtaboot, Maysalward, 7iber, and ShopGo (and hot new mix site Musicalism.fm), have rallied to protest the amendments with a Javascript click-through overlay, that reads in Arabic (roughly translated), "This site may be censored under amendments to the Jordanian Press and Publications Law and general internet censorship by the Jordanian government." The overlay shouldn't affect site traffic, as it disappears with a click, say movement leaders. (Wamda will also join the blackout by amending our site).

7oryanet, which roughly translates to "Freedom, O Internet", offers up-to-date information on the law's developments, also including information on how to protect yourself against pornography.

"We are not with pornography. We are pro-protection and pro-awareness," emphasizes Fouad Jeryes, 7oryanet member, founder of tech digest show Tech-Tech.me and co-founder of popular forum Amman Tech Tuesdays. "Ideally, ISPs should provide an opt-in solution that is free, for people looking to censor their own internet. The feed coming into the country should be free. It can't be the other way around."

Tech companies in Jordan create 14% of the GDP and employ over 50,000 people a year, stats that would plummet were the policy to become law, Jeryes points out.

Ex-Minister Juma agrees that enacting the policy into law would not only be a radical step backwards and a direct contradiction to the King's work to make Jordan entrepreneurship-friendly, but also ineffective. "Regardless of whether the idea is right or wrong, it simply doesn't work. There are plenty of examples of countries that have spent millions to do this, and at the end of day, people always find holes in the system and ways to work around it."

It's simply more important to educate the population on how to use the internet safely, and to tackle relevant issues like child pornography, which Jordan has already worked to do, he says.

Meanwhile, activists will continue to speak out. "We're hoping that we're able to slow things down and make people discuss it further," said an anonymous member of the 7oryanet community.

The debate will continue at Amman Tech Tuesday's upcoming Censorship Edition next week on September 4th.