The past week has been a busy one for the evolving world of Middle East digital freedom: a censorship bill before the Jordanian parliament prompted a blackout of local websites, the resignation of the Iraqi ICT minister fanned fears a draconian cybersecurity bill would secure immediate passage, the Lebanese Telecommunications minister condemned online censorship in a Twitter interview, Bahrain announced it would consider legislation criminalizing Tweets that ‘offend’ members of the ruling family and their allies, and the Tunisians came full circle from worst regional offender to the region’s first member of the global Freedom Online Coalition.

More than a year and a half after the Tunisian revolution catapulted the power of social technology to the forefront of the news, countries in the region are having an increasingly public debate on what kind of Internet they want to have.

Two years ago, before the advent of the ‘Arab Spring’ revolutions in North Africa, censorship was an unremarkable characteristic of many Arab states. Governments had a relatively free hand in filtering ‘objectionable’ content: anything deemed to be pornographic, blasphemous, and of coursethreatening to the stability of the political order. Although deplored by free speech advocates, the issue was tacitly avoided by local media and failed to ever capture the attention of the public debate.

According to an Open Net Initiative report from 2011, at least nine countries in the Arab World were using Western censorship tools to filter the web, including Bahrain, Kuwait, Oman, Saudi Arabia, Sudan, Tunisia the UAE, and Yemen. Countries without pervasive censorship apparatuses used other methodssuch as harassment and detentionto silence dissent. A 2005 Human Rights Watch report on censorship in the Middle East cited a study of bloggers from Lebanon, Jordan, and Syria, where more than 80 percent “practiced some form of self-censorship.”

Today, many countries remain heavy-handed and resolute in their use of filtration. In the Arab Gulf kingdoms in particular, advocacy for openness remains a struggle. However, government challenges to online freedoms are increasingly met by broad-based resistance, from the private sector and ordinary citizens, in addition to the traditional activist community.

In late August, the Jordanian parliament considered an amendment to its Press and Publication law that would allow the government to censor ‘pornographic’ websites. The Jordanian digital community was incensed, arguing that the legislation was overly broad and ill-defined, allowing for indiscriminate blocking of both editorial and social media content, and that the introduction of technical mechanisms for mass filtering could easily be used to block any form of content, including political speech.

What made the outcry from Amman different this time was the diversity of stakeholders. Freedom of speech activists were joined by the burgeoning Jordanian startup community in protesting the new laws. (Jordan is home to Oasis500, a highly competitive and much-lauded tech accelerator program that has been publicly backed by the ruling monarchy, and the ICT sector contributes to 14 percent of the country’s GDP.) Even the former Minister of ICT joined the chorus, arguing to Wamda, a community for MENA entrepreneurs, that the move was short-sighted and damaging to the country’s ability to grow as a competitor in the high-tech economy.

"This goes against our positioning as a country. When you block freedom, you block thinking. If we're serious about making Jordan an ICT hub, we have to put our money where our mouth is. The government should be looking at ways to support entrepreneurship. [With this move], we are creating the anti-ecosystem."

In response to the outcry, the Ministry of ICT extended its consultation period with the private sector. Activists and technologists seized the chance to raise awareness and put pressure on the government: taking a page from the global protests against the US SOPA/PIPA legislation, Jordanian blogs and websites went dark for a day on August 29th. Its detractors have found an unlikely ally: Queen Noor, the widow of the late King Hussein, took to Twitter to denounce the bill.

On the 11th of September, the bill went before Parliament. In response, the anti-censorship 7oryanet.com (translating, roughly, as “Freedom, O Internet”) organized a mock funerary march in front of the Jordanian House of Parliament. One of the organizers, Fouad Jeryes, reported that “around 150 participants from popular electronic news websites, digital content creation/new media publishers, members of the ICT industry, entrepreneurs, and the general public” took part. Jeryes also reports that protesters were blocked from observing the session, as per their constitutional rights. 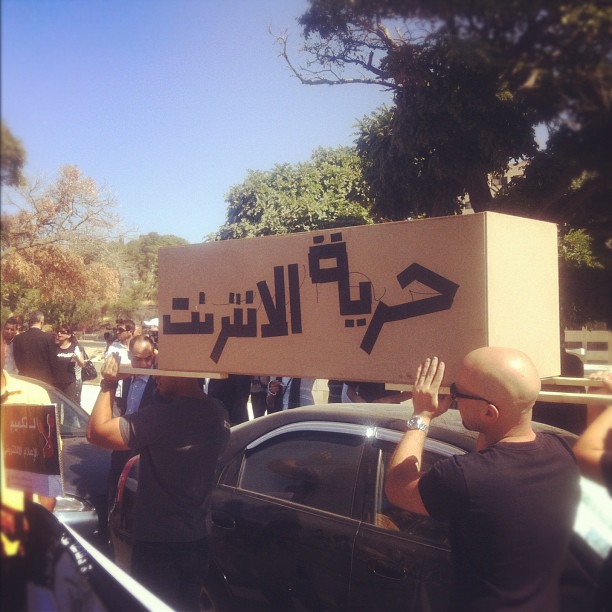 In neighboring Iraq, bloggers have been struggling for some time to draw popular attention to proposed cybercrime legislation. The legislation, which has been denounced by Iraqi and internationalhumanrightsgroups, has been criticized for overly vague and broad provisions that would limit free speech, criminalize dissent, and authorize ‘draconian’ punishmentssuch as life in prisonfor infractions. (Read Access’s analysis of the previous version of the proposed legislation here.) The bill was temporarily tabled, but many observers expected it to resurface in the fall for further consideration.

On the 27th of August, the serving Minister of Communications Mohammed Allawi, an opponent of the proposed cybercrime legislation, resigned, citing political interference. The Iraqi Ministry of Communications, which oversees the regulation of the lucrative telecommunications sector, has long been a point of political paralysis among the various factions in Iraq; former Minister Allawi, a member of an opposition party, accused the Prime Minister of meddling in ministry affairs. Iraqi netizens and international observers are now concerned that with with the departure of Allawi, the cybercrime bill will be put to a vote without further resistance.

Lebanon has long been acknowledged as possibly the freest country in the region when it comes to individual liberties, and it has historically refrained from censoring Internet traffic online. However, it hasn’t escaped its share of bad legislation: a 2010 proposed e-transactions bill, dubbed the ‘Gestapo Law,’ by a local blogger, included provisions for the the creation of a body with ‘moral’ authority, responsible for ‘licensing’ and suspending internet users and seizing a user’s data or hardware; it was dropped after vociferous protest from the private sector and users. In 2012, the Lebanese Internet Registration Act, or LIRA, called for registration of all ‘Lebanese websites,’ it was similarly dropped following organized criticism.

On September 2nd, Lebanese Minister of Telecommunications Nicolas Sehnaoui agreed to an Twitter interview with the MENA startup community site, Wamda. When Wamda asked Minister Sehnaoui about his views on the regional trends towards censorship; the Minister responded: 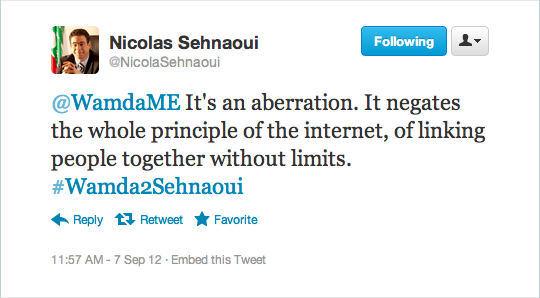 Currently, Lebanon has no official policies, legislation, or judicial precedent that specifically address freedom of expression online. Minister Sehnaoui will be up for re-election again in 2013.

On 10 September, the kingdom of Bahrain revealed it was launching a crackdown on ‘defamation online’ in response to the country’s love affair with social media, and launching a site for people to report social-media related complaints. A spokesperson for the Ministry of the Interior pointed to an increase in the use of ‘modern communications’ tools for directing ‘abuses or personal insults’ to ‘public figures’ or ‘national symbols,’ calling for ‘perpetrators’ to be tried and punished. According to some estimates, Bahrain has the second-highest proportion of users to population in the region, with roughly 4.3% of the country’s residents registered as users of the popular microblogging service.

Twitter has been used extensively by Bahrainis as a means of documenting, publicizing, and contesting stories and information about the country’s ongoing civil strife. Since the beginning of the Bahrain protests on 14 February 2011, the hashtag #Bahrain and its Arabic equivalent, #بحرين, have been tweeted as many as 2.8 million and 1.48 million times, making it the most-tweeted hashtag subject among users in the region. Not all of this has been original content, however: as Jillian York of the EFF has noted, the disputed events gave rise to the region’s first political hashtag trolling and spam, rapidly polluting the channel and preventing meaningful interaction.

The Ministry of the Interior denied that the crackdown would infringe upon freedom of expression, but critics from the country’s reformist civil society organizations condemned the plan. Critics asserted that the country’s existing legal code was sufficient to prosecute libel and defamation, without resorting to wide-scale policing of the Internet. The announcement came the same day that human rights activist Nabeel Rajab, the country’s best-known jailed blogger, announced he would seek appeal for his conviction and three-year sentence for organizing ‘illegal activities.’ The Cairo-based Arab Network for Human Rights Information (ANHRI) had criticized the Bahraini government for targeting Rajab’s tweets in a 2011 investigation.

Last week in Kenya, the country of Tunisia came full circle. Once recognized for being among the world’s worst ‘enemies of the Internet,’ it became the first Arab nation to publicly commit to a progressive online freedom agenda, joining the Freedom Online Coalition, a group of countries ranging from the Netherlands to the US, and Kenya to the Czech Republic, that have committed to advancing Internet freedom as a key foreign and domestic policy issue.

On 7 September, Dr. Moez Chakchouk, head of the Tunisian Internet Agency (known by its French initials ATI), addressed a plenary of civil society activists, entrepreneurs, and diplomats gathered at the United Nations headquarters in Nairobi. He acknowledged Tunisia’s history of censoring content and declared Tunisia’s support for the international coalition, announcing that Tunisia would host the following year’s conference. Back in Tunisia, the Minister of Telecommunications, Mongi Marzouk, held a press conference, reiterating that the country had stopped filtering, promising that “[censorship is] an old practice that [Tunisia] won’t follow again.”

Although Tunisia stopped filtering the national network back in January 2011, it wasn’t until this past week for the country to formally declare policy intentions on Internet freedom. Up until this point, the guarantee of a free Internet was a tenuous outcome, based on a patchwork of good intentions, personal promises, and favorable judicial findings. Skeptics remain: the website Tunisia Live quoted Sleh Eddine Kchouk, president of the Tunisian Pirate Party, as saying: “Tunisia has always embraced advanced technologies when it comes to the virtual world, in theory. But in practice, it’s completely different.” Kchouk has a point: in order for freedom online to become the law of the land, Tunisia must follow this declaration of policy with the adequate legal guarantees that can withstand judicial review.