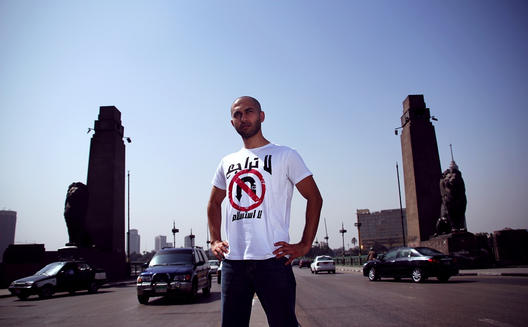 A start-up is often a labour of love; and this is never truer than with the single founder start-up. KAF Wear is one such example.  Founder Kareem Mitwally finances, plans, designs, outsources, manages production, services, and inventory, while monitoring point-of-sale, managing wholesale, and doing the marketing, accounting and paperwork. Oh, and he also writes and sings the songs for his brand’s ads!

KAF is a “totally made in Egypt” clothing brand with t-shirt designs that reflect Egyptian identity, history, and culture, along with trousers, winter scarves, and a line of boxer-shorts (men’s underwear) under development. Kareem, who launched the brand in 2005, spoke candidly to me about the hard work it takes to be a one-man powerhouse.

“The trouble came when my revenues reached 250,000 EGP (roughly $ US 42,000 using today’s currency rates) by the end of the first year. The starting capital of the business at the beginning of this year was only 20,000 EGP (~$ US 3,300).  When I made this amount of money so quickly during my first year of private business, whereas my last salary as an employee before that was 1200 EGP ($ US200), I got fooled by this jump and decided to take quick steps to expand in several directions, which led me to crash. After this, I realized how tough the reality of the market is, how small I am, and how this affects my bargaining power with suppliers and clients,” he began.

It may seem strange to cite profitability with 6 months of launch and huge initial success as problems, but Kareem is big enough to admit he was inexperienced. “I got my first customers through direct selling, the first sales experience of my life" he explained.

He did have one huge overhead, a stall in the City Stars mall that was staffed by two sales reps, but in the aftermath of the revolution, it became nonviable. “I just left it two weeks ago because nowadays the market buying power is not strong relative to the rent at City Stars." While he's closed the stall for now, he vows to return at a later date.

Even after 7 years of being in business, Kareem is willing to pivot.  One thing he won’t change, however, is his Souq.com store. “I’ve been with Souq since they launched, around December 2009. KAF is one of the top rated sellers on Souq, 98% [positive] in 211 feedbacks,” he described.

Indeed, a happy customer still gives Kareem the most joy, and perhaps the impetus to persevere in what is still an emerging sector. “The biggest joy I get now is when I see positive feedback from end users. I feel that I'm succeeding to change the mentality of a market and an industry at least a step further.”

So what does the future hold now that Kareem’s overheads are down to minimum again?

“Poor sales and marketing power due to lack of human resources have been the major reasons for our slow growth, so I'll hire a sales team, expand wholesale reach in the local market, introduce new local product lines, launch our first store as a retail chain, and get serious about direct exporting through suitable agents in potential foreign markets.”

Kareem assured me he will also continue the design creativity the brand is famous for, and continue to offer “quality products at moderate prices.”

Kareem started KAF to break the Western cultural stranglehold many local companies subject themselves to creatively. “All companies are following the West in everything. I wondered why are we followers. As they say, 'If they can, we can.' I believe 'we can do better'. I know it's not easy and a long road, but there has to be a start.”

It certainly has been a long road, but Kareem's ability to persevere through KAF's highs and lows can only bode well for KAF’s future. With his next move to hire a team, I think the business is in a good position to reach the next level. Better late than never.