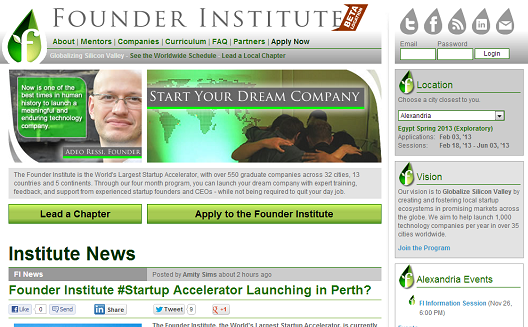 Interested in bringing a startup acceleration program to Alexandria, Egypt? The Founder Institute is currently testing demand for opening a chapter in Alexandria in Spring 2013.

An early-stage startup accelerator and network, the Founder Institute has helped to launch over 650 companies across 32 cities and five continents in its three years of operation.

Through their part-time four-month program, existing and prospective founders can launch their startup with training, feedback, mentorship, and support from experienced startup CEOs - while not being required to quit their day job. The Insititute also works to help startups find external investment.

If enough people express interest in the Alexandria program by December 2nd, 2012, then the Founder Institute will formally launch a chapter there. Those interested in bringing the program to Alexandria can fill out an interest form on the website.

The Insititute has replicated the program many times around the world, but this is their first foray in the Arab world. They are also exploring a possible program in Riyadh, Saudi Arabia in 2013.

The program’s “Graduate Liquidity Pool” also enables graduates and mentors to create strong teamwork-based ecosystems where startups can flourish. They call their strategy "Globalizing Silicon Valley" – an attempt to recreate this supportive ecosystem in other places around the world.

Before the deadline, the Founder Institute will be hosting a number of free events in Alexandria, including:

Samer El Sahn, CEO of Tahrir², and Hashem Zahran, CEO of Cloud7Labs, are leading the Founder Institute's efforts in Alexandria.

The Founder Institute program is open to anyone passionate about building a tech company; whether you have an existing idea or not, have a full-time job or are unemployed, are young or old, male or female, experienced in business or straight out of school. The program supports a range of tech industries including digital media, software, biotech, cleantech, e-commerce, advertising, consumer electronics, and more.

"We hope to get at least 100 applications before the end of admission time to know that we are on the right track of building a new technology entrepreneurial system within Egypt," says Zahran. You can find the interest form on their website here.