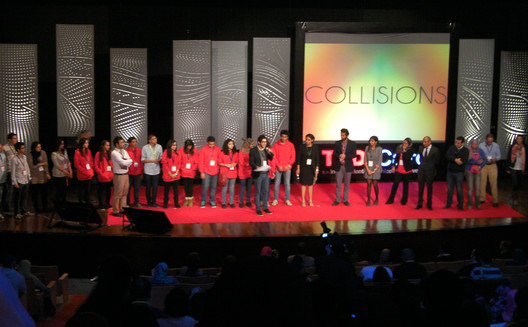 Depsite Egypt's recent angst, TEDxCairo went ahead with its 2012 showcase event “Collisions” at the AUC’s New Cairo campus.  Although spectator numbers and energy levels were slightly down compared to last year’s event, perhaps due to the turbulent political climate outside the event, those present were still positive and hungry for new fresh ideas; one could tell the event was a welcome distraction for many.

The event format was the same as last year, but with better decor.  Presenter Khaled Mansour, who rose to fame on Bassim Youssef’s shows, is funny and hip and did a good job covering up the ongoing technical delays backstage. He really should have picked a language and stuck to it, though; he kept jumping from Arabic to English, sometime mid-phrase. I know this is a problem many Egyptians suffer from, but a professional should to be able to deliver in one language.

Ironically it was the foreigners in the audience who suffered the most; I spoke to a few that spoke Arabic, and the constant to and fro between languages made it hard for them to keep up.  It also couldn’t have been easy for the professional interpreters on site; their job is hard enough as it is!

The speakers themselves ranged from dull to great. It was good to see many speakers talk about the economic revival Egypt needs and suggest ways to achieve it. If there’s one thing that unifies all Egyptians now, regardless of political persuasion or social class, it’s worrying about employment. That’s only going to improve by encouraging entrepreneurship and small to medium-sized companies.

AUC Professor Hassan Azzazy spoke of the need for local research institutes to become part of the business community, so that they focus on solving real world problems that represent good market opportunities in non-traditional sectors.

Consultant Mohammed El-Dahshan told the audience that Egypt has to democratize entrepreneurship, as 85% of firms are unofficial, i.e. not government-registered.  Financing options for sole-traders, micro-businesses, and large businesses exist, but there’s huge growth financing gap for small businesses in between.  Plugging this gap would facilitate many more high-growth start-ups, greatly decreasing the number of non-registered businesses, he said. Tax revenues would increase twice over and employment would increase exponentially.

Khalid Bichara, co-founder of LinkDotNet, shared his views on what makes a successful business, based on his extensive experience: Be passionate about your business, have the right team (not necessarily the best individuals alone), always be prepared as you never know when opportunities will come, reward loyalty and achievement, have goals, and be great at executing your plan.

On the social side, Moustafe Riad presented us with historical proof that the much trumpeted “clash of civilisations” was in fact a big lie, based on recent colonial thinking and “white man’s burden." Photo after photo was shown of the history of Middle East and Europe showing how the cultures have always mixed and worked together.

Yasmine El-Shawy is a young lady with Spinal Muscular Atrophy, but this didn’t stop her finding freedom in graphic design and volunteering for Productive Muslim a website dedicated to the intersection between Islam and productivity. Her talk was inspirational and received two standing ovations.

Amira Makhlouf spoke of divisions between people, explaining how controlled division spurred growth, but uncontrolled growth becomes cancer. Egyptians should not tolerate difference, but should accept it and embrace it like they did only a few decades ago, she prescribed.

Emil Aziz dicussed founding E-Mokhalfa (e-traffic-violation) to help Caireans “name & shame” transgressors, so that Cairo can move out of the global top 10 list for traffic crashes. This policy has made users self-govern and educate themselves, and the Ministry Of Interior has also taken notice.

Azza Idris talked about how too many Egyptians judged by appearance without seeing the underlying reality of situations.  Current interpretations of Sharia' Law (Islamic jurisprudence) fail to deliver the Islamic goals of fairness and social justice, she explained.  Idris is pushing to update interpretations so we have a country of personal laws that protect the family, and also provide more forgiveness.

An example of this kind of forgiveness followed later during the debate.  What was being debated was not nearly as important as the civility and restrain with which it was being debated.  Both parties disagreed fundamentally, but did not resort to the name-calling and outright hostility that has unfortunately become the norm in Egypt now between people who disagree; it was a great example to Egyptians.

Egypt is feeling uneasy, but the TEDxCairo team still brought us enough gems to make the event more than worthwhile, as they made Egyptians feel good about themselves and the future.