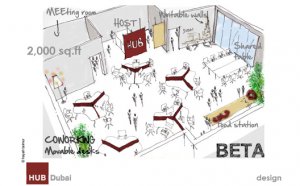 On 12/12/12 12:12 PM and precisely 12 seconds Dubai time, HUB Dubai launched virtual operations; the physical space is expected to launch in the first half of 2013. It wasn't by accident- the auspicious timing was chosen to usher in a new era of creativity in one of the Middle East's most diverse cities.

One of 35 HUBs worldwide, HUB Dubai will be the first to launch in the Arab world, creating a collaborative space for entrepreneurs, artists, builders, and thinkers to connect. These co-working spaces are trending worldwide because "entrepreneurship is contagious," says co-founder Aman Merchant.

"We need to have people working together in order for the world to grow and create big things with social impact," he says. Different hubs may have different vibes, but they share one common agenda, which is making the world a better place for entrepreneurship. "Like-minded individuals need to connect, and hubs allow these individuals, who are determined to change the world, to discover each other and innovate together."

One would think that Dubai, which already boasts coworking spaces MAKE, startup-friendly spot The Shelter and flexible space The Pavilion, where we hosted Wamda's MixnMentor event, might be a little crowded for another space.

But the HUB Dubai co-founders, who include Merchant, Habib Al Assad, Marwan Chaar and Wissam Otaky, chose the city for a reason. "Dubai has been about entrepreneurship for a while now, but doesn't have an environment that focuses on a mixture of entrepreneurs, innovators, and social actors", says Merchant. 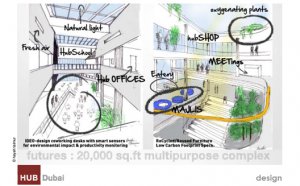 Leading up to the opening of their physical space, HUB Dubai has been offering their free pilot HUBnet, an exclusive online global platform that allows its community to interact and engage with 5,000+ other "HUBsters" from 35+ HUBs across 5 continents.

Thus far, it's building steam. "We already have a community of 500 people who've been attending our events and are part of our social media channels," says Merchant, and around 20 people are already signed up to become long-term users of the space. The HUB will gather this community at a series of events leading up to the opening of their physical space early this year. 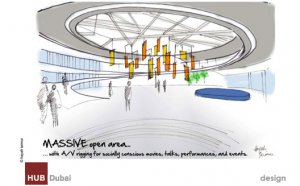 While they haven't built the space yet, the four co-founders plan to build "a cool place for the coolest entrepreneurs to work in, in a Google mindset where you can stay for 24 hours," in the Burj Downtown area of Dubai.

Naturally, they've already involved the community in the design process, and plan collaborative amenities like a video conferencing wall that broadcasts to multiple HUBs around the world.

They're funding the futuristic design with seed funding from venture capital firm Emerge Ventures, and a group of individual private Emirati and expatriate investors, but seek more to scale their impact (and they haven't yet extended their funding to the crowd domain.)

Next up after Dubai? HUBs are planned for Cairo and Istanbul this year- keep an eye out for this new collective creative force in the Middle East.

Interested members can apply to HUBnet for free during its beta phase, via the HUB Dubai website, http://the-hub.ae.