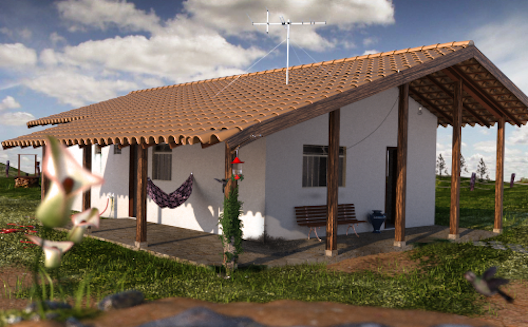 3D rendering is the process film studios use to turn the 1’s and 0’s of raw digital data into the images that compose movies with animated components like Transformers and Madagascar.

The only downside is that it takes an enormous amount of time, says Mohamed Anwar Sheikhaldeen, the co-founder of Exa.io, a cloud-based rendering service. “Madagascar 3 took 65 Million compute hours across 19,200 servers! Even a student we served needed 40+ hours to render a single shot for an interior design assignment.”

“Since it is an artistic job that is constantly refined, he or she will often need to re-render all over again!” he adds.

Exa.io, the company he co-founded along with Zakaria M. BenHamouche, and Ibrahim Mohamed Mokdad, provides affordable cloud-based rendering 112 times faster than the average render farm. Users can upload a project, render it, and download it at a fraction of the time and cost.

Explaining the story behind the name, Sheikhaldeen says, “EXA is the Greek scale of a ‘quintillion’ or a billion billions. So you have Mega, Giga, Tera, Peta and EXA... Just like the space race in the 60’s, there is a global race between now and 2020 to build an EXA-scale supercomputer.”

“A supercomputer can do ‘EXA’ operations per second, so we aspire to build user friendly and accessible technologies that are based on cutting edge supercomputing technologies,” adds Sheikhaldeen, who has been involved in 3 unsuccessful startups prior to Exa.io, and is a Microsoft Certified Technology Specialist.

Starting Up in Bahrain

The Bahraini founders are all alumni of the University of Bahrain, with Computer Engineering, Computer Science, and Software Engineering undergraduate and graduate degrees between them.

As individuals, they  have won the Microsoft ImagineCup 2009 and the Zain Bahrain Telecom “ZainDream” Technology competition, and as Exa.io, they recently won the Middle East Intel Business Challenge 2012.

With an overwhelmingly positive market response to their service, Exa.io’s biggest hurdle has been registering their business—a sentiment that has unfortunately been echoed by many startups registering in Bahrain due to high capital requirements and other convoluted procedures.

Having been among the first batch to go through the 3-month SeedStartup Accelerator program in Dubai, it was ultimately their mentor who led them to register in Delaware, USA.

Clearly astonished, Sheikhaldeen says: “In the tax-free state we registered on day one; got the confirmation on day two, and on day three I had the C-Corporation documents in my hands sent by FedEx. Done!”

Sheikhaldeen, who continued to sing the praises of SeedStartup as an accelerator that “outshines local startup efforts and accelerators by several orders of magnitude!” said that today, now that they can focus on execution, one of the biggest challenges Exa.io is facing is building a supercomputer to boost their bandwidth and processing power.

“It’s like building a space shuttle: a massive system of many small parts that all must be working perfectly or the whole thing must be halted. But when it works it’s a juggernaut!” he beams.

Sheikhaldeen adds, “We are all about building cutting edge technologies here in the Arab World. We don’t believe in following the path of the other technology leaders—that’s why you won’t find us building another Google or Facebook.”

“We are proud to be the fastest rendering solution in the world now—and we’re just getting started. We are currently working on some other record-breaking initiatives which we’re hoping to release soon!”