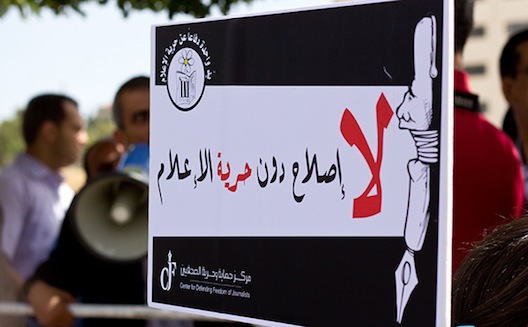 Yesterday, just three days after the Jordanian government moved to block around 300 websites, leaders of media sites met with members of Parliament to urge amendment of the Kingdom's controversial Press and Publication law.

Following protests outside the Jordan Press Association on Tuesday and demonstrations yesterday outside Parliament, Daoud Kuttab, founder of AmmanNet, along with others, including Basel Okour, the founder and chief editor of Jo24 and managing editor of Ammonnews, went to speak with several members of Parliament, who were “very supportive of our position, and very upset with the implementation of the law,” says Kuttab.

After AmmanNet, which has been reporting local news since 2000, was blocked on Sunday, Kuttab took to his blog to express a sentiment common to Jordan’s tech and media community: “[the censorship] is a violation of Jordan’s constitution, which guarantees freedom of expression, Jordan’s commitment to international conventions and a reneging on the promises made by the Jordanian Prime Minister to Jordanian media and in his address to the IPI congress.”

When the policy was first signed into law last September, the tech community revolted, staging protests and a SOPA-style internet blackout that mostly met with silence.

At the time, a sympathetic Ministry of ICT offered a “letter of intent” indicating that tech initiatives would not be censored; several parties also pushed for a "Memorandum of Clarification” that would guarantee legal protection to the tech community.

While they’re still waiting for that Memorandum, a new movement is building to overturn the law, urged by outspoken figures like Kuttab, and taking shape in Parliament. Reports note that 50 members of Jordan’s 150 members of the House of Representatives have called upon the government to delay implementation of the law, while 82 have signed a petition to fully amend it to protect freedom of expression in the Hashemite Kingdom.

The move comes just days after Jordan hosted the International Press Institute’s World Congress on May 19-21 and the World Economic Forum on May 24-26. Censorship continued throughout the Arab Advisors Group’s 10th Convergence Summit on June 3rd and 4th, which addressed broadcast and online media strategy, social media, and the rise of smartphone penetration. As censorship contradicts much of the country's recent rhetoric about freedom and innovation at these conferences, silence on the topic has reigned.

“Censorship wasn’t really discussed in the sessions,” says Hazem Zureiqat, founder of Sowt, a social network driven by short audio posts. When Basem Aggad, a co-founder of Amman Tech Tuesdays, asked a telecom-focused panel about the contradiction between recent initiatives and the censorship, panelists rebuffed him. “I’m just implementing the law,” Zureiqat recalls one telecom regulator answering. (listen to the question on Sowt here).

One potential reason for implementing the censorship, Kuttab suggests, is to curb online discussion following the government’s plan to raise electricity fees, potentially before the end of June, as part of its agreement with the IFC. The impending fees have already caused unheaval and protests in the south, he notes.

Is the law effective?

What’s most concerning about the law is that it’s arbitrary, says Abed Shamlawi, CEO of the Information and Communications Association of Jordan (int@j).

“The law has no criteria,” he says several times. “What’s a news website and what’s not is not well-defined. Some of the websites that were blocked were not Jordanian but were based in Jordan, or were posting news in general and not necessarily about Jordan.”

As both he and Zureiqat point out, the law could even be used to block Google or Yahoo! News, as it seems to apply to any site mentioning Jordan.

What’s more, there’s little oversight for the process. “It's left to the discretion of the director of the Press and Publications Department; the law gives the right to censor to one single person,” says Shamlawi.

One of the law’s primary stipulations is that any journalist writing in Jordan must “refrain from publishing whatever material bound to stir violence of inflame discord of any form among the citizens.” This includes comments that others post on the site.

However, the reason most of these sites were blocked, says Shamlawi, is simply that they were not registered. Yet, he says, “no one was legally or directly notified that they had to register.”

Most sites have been unblocked since the initial censorship, after conferring with the department and clarifying that they are not a news site, or have now registered, he says. Others are operating under slightly modified URLs, or directing readers to their Facebook pages. 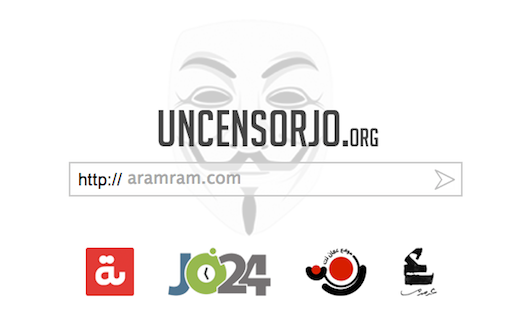 Will censorship harm the startup culture in Jordan?

As the overwhelming majority of media and tech figures point out, the censorship is ineffective and easily circumvented. Shortly after the blocking, a site at uncensorjo.org went live, offering access to Al Bawaba, Jo24, AmmanNet, and Aramram.

While many say that censorship is tarnishing Jordan’s image as it tries to become the “Silicon Valley of the Middle East,” it seems that access on the ground isn't affected.

“If Jordan wants to be a leading country in information technology sector, then this law is damaging,” says Ibrahim Owais, the Senior New Media Designer at local digital agency Syntax. (Disclosure: I used to work at Syntax). “But, on the other hand, you cannot control the internet. With the rise of social media and people using the internet to express their opinions more freely than before, I don’t think anything can stop them from reaching the right news.”

Fadi Ghandour, Founder and Vice Chairman at Aramex and Chairman of the Board at Wamda, agrees. “As I have always stated, censorship does not work. If there is a problem with news sites that publish false information and defame people, then the answer is in strengthening the law and toughening the punishment, not censorship.”

Any Editor-in-Chief, the law says, must have been registered at the Jordan Press Association (JPA) for at least four years. (For more on the restrictions on editors, click here to see the infographic created by the Jordan Open Source Society) This Editor, for one, wouldn’t be able to run Wamda from Jordan.

What's more, editors of online publications are not allowed to join the JPA directly, according to the Press Union laws, says Basel Okour of Jo24: "The law of the union makes it very complicated and difficult to join. Those who only work on websites are not allowed to be a member of the union." All of the current JPA members began their career at a traditional publication, and then went on to launch websites, he explains.

If that element of the press and publications law is implemented to the letter, it could effectively kill the creation of any startup that publishes content (name an online startup that doesn’t). "The government is trying to kill independent new media," says Okour.

Will it scare off investment and startup creation? “If the law continues to be unclear, and if there is no Memorandum of Clarification or explanation, then yes, this could harm the sector,” says int@j’s Shamlawi.

“This could actually hinder people from being innovative or starting up a company,” Zureiqat agrees. “Does someone who wants to start a small site in his or her town and publish local news, have to hire someone with four years of experience?”