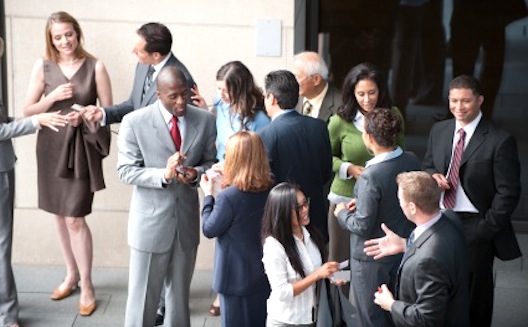 Dubai is an unusual place. The startup scene is small but growing rapidly, the majority of people are expats, and there are dozens of universities and MBA programs.  Many people socialize only in their professional, national, or alumni circles, but could gain a lot by stepping outside these networks.

At MBA events, I often hear of people looking for opportunities to invest, while at startup events I usually hear of startups looking for investment. This always makes me wonder, “why aren’t these two groups talking to each other?” In a previous post, I suggested that some startups could benefit from looking to the MBA community to fill gaps. In this post, I’ll tell you the 6 people to look out for if you crash one of these networking events.

One thing to keep in mind is that just like startup founders or programmers, not all MBAs are the same. There is no single ‘type’ of person that gets that degree. However, nearly every MBA class produces people that could be helpful to a startup that is struggling to find the relevant expertise. It’s not that that advice is exclusive to MBAs; these types can be found around the ecosystem as well; but I’ve noticed that these are the types of graduates that startup founders could easily get in touch with at networking events.

Of course, as a founder, you should never bring someone on board who isn’t a good fit, regardless of what they promise or what you need. It goes without saying that startups should consider bringing people on initially on a trial basis, and ensure that compensation is tied to performance (cash for cash deals, equity for non-cash deals). It’s also not a requirement that someone be an employee (or cofounder); these people can help as advisors and support in a number of different ways. Here’s who to look out for, in general:

If you encounter one of these people at an event, get a meeting with them immediately and see whether they are a good fit and what they can do to help you.