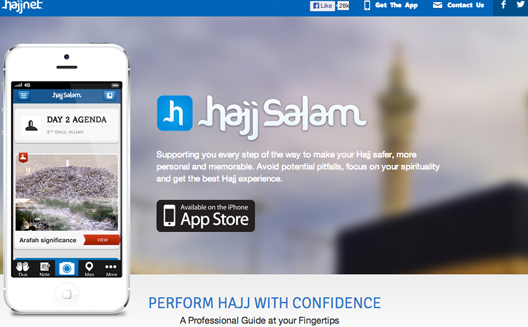 Technology is slowly finding its way into Islamic culture. With a fourth (23%) of the world’s population identifying as Muslim, and around 2 million pilgrims performing Hajj every year, the market for information on rituals and prayer is becoming an appealing niche market for mobile app developers.

In the past couple of years, several mobile applications centered around Islam have launched, including Moroccan app Salatuk by Masarat App, Jordanian AlSalam app, launched by Romman Apps, and Fathkrony by Frootapps, among many others, all focused on offers reminders for prayer time.

This summer, two more have burst onto the scene, this time offering digital mobile guidance for Muslims during Islamic pilgrimage: UmrahSalam and HajjSalam.

Developed by a Dubai-based startup called Hajjnet, the iOS apps work to guide pilgrims through Hajj and Umrah, the two major rituals in Islam, which yearly form a US $16.5 billion market in Saudi Arabia, with local businesses generating around US $30 billion in ritual-related activities. Hajj is performed during Hajj season, while Umrah can be performed throughout the year and is most popular during Ramadan. Hajj is always organized in groups of a minimum of 50 people and can only be purchased as a package through operators licensed by the Ministry of Hajj, but the mobile apps are designed to guide anyone through the process.

“One of our main goals is to familiarize the user with the environment and the process of Hajj and Umrah, and make ourselves indispensable for pilgrims,” says Ali Dabaja, a Lebanese-American entrepreneur who founded Hajjnet in Dubai after losing his job in the U.S. during the economic crisis.

So how many pilgrims want to take what Dabaja dubs a "web 2.0" approach to religious ritual?

Thus far, there's a modest market for the apps, which have garnered 20,000 downloads during the past two months. Since UmrahSalam launched in mid-August, it's ranked in the top ten for Travel categories in the Apple App Store. According to Dabaja, it's most popular in Saudi Arabia, followed by Pakistan, Nigeria and Egypt.

Like UmrahSalam, HajjSalam, the latest app, which launched in September, is designed to be used before and after a pilgrimage.

A timeline helps pilgrims set their event schedule, a directory of essential information helps them prepare, offering tips of the relevant items to bring, the approximate amount of money needed, the type of clothing, hotel options, necssary documentation, taxi fares, and even the addresses of local barbers for a haircut (a necessary element of the pilgrimage). 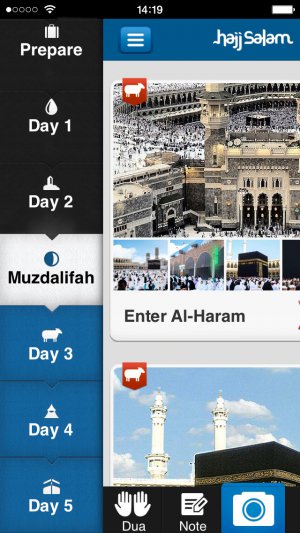 The app, which mostly functions offline, offers photos of given locations to help pilgrims identify them, and offers prayers listed in multiple languages.

Of course, for the the new world pilgrim, it also offers online integration with social media so that those on the journey can share posts about their progress. “Every time a pilgrim completes a step, it gets added to the right side of the application where the user can share it,” Dabaja explains.

The app is only available in English so far (perhaps a reason it hasn't taken off a bit more?), but an Arabic release is planned soon.

From ritual to revenue

Although Debaja has never performed Hajj or Umrah himself, he trusts that they will make the journey easier, thanks to the help of the Head of Content, Mohamad AlShareef, a known expert in Hajj and Umrah, who has performed the rituals over 20 times each and established AlMaghrib Institute, a non-profit university that provides an Islamic education experience, with branches in Singapore, the UK, Canada and the US. El Sherif, a Canadian of Egyptian origin, also moved back to Dubai to become an investor in Hajjnet.

Thus far, the team hasn't marketed the app, except with a few Facebook ads, and it's funded development with money from friends and family.

The team isn't planning on monetizing just yet, but when it does, it will pursue sponsorships with companies like Nestle, the largest producer of Halal food in the word, and other hotels in Jeddah, travel agents, and insurance companies. After all, if local businesses are generating revenue from the rituals, perhaps a mobile app can too.