Ever since online retailer Zappos announced last month that it was getting rid of job titles, the web has been buzzing with cheers – and some criticism – at the organization’s move to jettison traditional corporate hierarchy.

Zappos, founded in 1999, has never been one to follow mainstream approaches to conducting business. The e-commerce startup is already known for offering fresh recruits the option to quit and receive cash on the spot, which is an interesting approach to test loyalty and retain only those with a stronger attachment to the brand.

Seemingly right after launching, the startup-cum-juggernaut quickly made a name for itself by focusing on stellar customer experience and employee satisfaction.

At Zappos, happiness matters, so it might seem like a natural move for the organization to hop on the holacracy bandwagon, eliminating job titles, at least internally. But Zappos is not the first startup to go for it: smaller organizations, such as Twitter co-founder Evan Williams’ latest venture Medium, and web design company 37Signals have also adopted holacracy.

Might holacracy be a new blueprint operating system for startups?

Much like companies in the holacracy model, startups should typically keep laser focus on objectives, so the question is well worth digging into. While the model gets rid of the chain of command in the traditional sense, it does not completely do away with organizational structure but offers a new framework that is designed to allow more employees to lead and actively engage in different capacities.

Taken from the Greek word holon (meaning “whole”), holacracy is the brainchild of Brian Robertson, who now runs HolacracyOne, a consulting company that helps organizations transition towards the model.

The concept is based on a fluid structure of circles that are self-governed. Each circle has a set of objectives to fulfill under one main brand, and is composed of Core Roles (Lead link, Rep link, Facilitator, and Secretary) and a set of Defined Roles, fulfilled by different team members. The startup’s main objective would form its bigger circle, with subcircles created for smaller, more specific targets. Each objective is further broken down into a series of items, allocated to the different roles forming the circle. Team members can contribute in different circles (e.g. the Lead Link of one circle could be in charge of Brand in the next).

Aside from its fluidity, one of the greatest assets of this model is the structure of the two types of meetings it offers (governance and tactical), both calling for conciseness. Governance meetings serve to define roles and restructure circles whereas tactical meetings help delineate challenges, strategy, and next action items. Both meeting types serve to resolve tensions (identified as a disparity between where a startup wants to be next and where it currently stands), and are based on transparency and metrics.

This diagram represents the operating system within each circle: 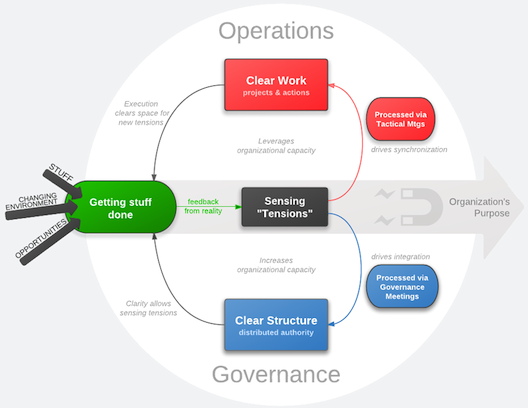 It all looks good on paper, but feedback has been divided. The first thought that comes to mind is culture – startups typically seek to hire employees who fit well within office culture, and the way circles are designed to operate on their own and within each other only amplifies that need. On the other hand, this could be a great way to weed out less-than-satisfactory hires early on – something entrepreneurs tend to struggle with.

Startups typically evolve in an environment that requires a quick reflex of adaptation, and traditional bureaucracy has often been blamed for getting in the way of that. A flatter model allows for more fluidity and allocation of talented employees where they can do their best work, perhaps offering more room for transformation and recycling.

Yet to navigate a startup through successful iterations, entrepreneurs need to have a unified vision. For small teams, distributed authority and decision-making power might hinder, more than help, meeting targets.

Holacracy places purpose, not people, at its core, and this may serve to keep a team driven and zeroed-in on short-term objectives as well as long-term vision. Proponents of multitasking might also praise it as a solution to burn-out and demoralization; holacracy encourages talent to organically direct themselves where they can be most efficient, without having to end up churning through disconnected, atomic tasks.

But keeping your team motivated takes more than encouraging employees to take the lead and fostering a close-knit team culture: complete transparency is one of the keys to making holacracy work for startups. The model also requires spending a lot of time doing hands-on work with the team, a resource with which entrepreneurs who are at the point of scaling their startups need to be frugal.

Would the model then offer enough solidity for a startup to keep running when the executives are out securing deals? And for small teams operating out of the typical open startup office space, will the effort spent transitioning towards the new structure outweigh the perceived long-term benefits?

It is also fairly easy to see how Lead Links could end up with more roles to fill than they possibly can, since they are required to fulfill all roles that have not or are no longer assigned to any team member.

But the model, still relatively fresh from its inception in 2010 (it has only recently gained global attention), can be adapted. Medium has already introduced mentorship circles and Zappos, who first selected a percentage of their team to transition towards the model, still uses job titles externally to offer some clarity to partners and clients. Taking the model a step further, startups could also opt to translate objectives into measurable Objective and Key Results (OKRs). Gradual transitions will offer the best insights as to which adaptations work best.

Although holacracy has been designed with agile organizations in mind, there will need to be a long line of startups testing it before anyone will be able to conclude that it is a fail-proof model for freshly launched businesses. One thing that remains certain is that it takes a great team to truly make it work, so hiring great culture fits and can-do characters has never made more sense.

Meanwhile, Zappos CEO Tony Hsieh will be investing some of his own money to turn the Las Vegas neighborhood where the company is headquartered into a fully holarchical system.

Here’s an interactive example of HolacracyOne’s organization to get a visual sense of how Holacracies operate.