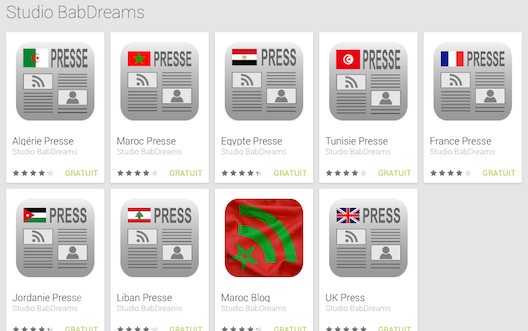 Stéphane Lagouche is not your usual app developer. Ten years ago, this French engineer moved to Morocco to start a new career as an airline pilot. After a few years, foreseeing the potential of mobile apps, he decided on another career change. In late 2010, he started his own app development agency called BabDreams.

When he launched his company, two years after Apple opened its AppStore, neither he nor any of his three employees knew anything about app development. They released their first apps in 2011, including news aggregator Maroc Presse, but it wasn’t until 2013 that they were able to live on their app’s revenues.

In the meantime, the team offers services to facilitate European companies employing Moroccan companies or employees due to their reduced expenses. Even though Lagouche is critical how outsourcing is impacting the Moroccan talent market, he admits he would never have made it without this initial revenue flow, and the learning opportunities outsourcing presented.

Having noted that in countries with more mature app markets, the first apps to successfully hit the scene were media-based, the first app he launched was Maroc Presse, a free app aggregating the main media sources in Morocco. I downloaded the app and have been impressed with its functionality and the user experience. I can easily find the media I want to read with category filtering, and read my RSS feed (fixed and tweaked by BabDreams to increase readability). The app shows an excerpt of each article and only requires one click to display in-app the full-length article as it would be displayed on a mobile browser.

Six months after this successful launch in 2011, the team launched Algérie Presse and met similar success. Based on this, he continued the model’s international expansion; it’s now offered in Egyptian, Lebanese, Tunisan, Jordanian and even French versions.

The entrepreneur believes he now has a good understanding on how to launch an app in emerging markets. But entering the European market is an entirely different thing, as the studio can’t afford advertising there. An app for the U.K. should be launched soon; it will be interesting to see if it can make it there without the Francophone Arab diaspora to back it up.

Today, more than 80,000 users connect every day to Maroc Press or its variants, for a total of 250,000 sessions per day. This is good news for BabDreams, especially as its only revenue stream comes from in-app advertisement; it now sells 65 million banners a month. Yet, Lagouche is clear: the digital ad market in the Arab world is far from mature. It’s the geolocalized ads targeting Europe’s Arab diaspora that are responsible for the company’ sustainability. In the case of Maroc Presse, two-thirds of its revenue comes from the 40% of its users living abroad. “Our users are here,” he says, “but our market is not.”

At the same time, BabDreams released a new app in Morocco. Maroc Insolite is a user-generated app that lets users browse and add pictures that depict things that could only happen in Morocco. Of the 35,000 photos online, users have contributed 4,000. Each day, the team receives 50 new pictures from users, but only publishes five or six to keep the quality up, while ensuring that the photos have not been already added.

Unsurprisingly, Lagouche has drawn some lessons from his experimentation. Here are three major ones:

“What works is the community aspect, the ‘Maroc’ in Maroc Insolite, the ‘Algérie’ in Algérie Presse,” explains the entrepreneur.

He learned this the hard way. His app Afrique Funny, the African version of Maroc Insolite, never took off, he says, probably because the continent was so big that people couldn’t relate enough to it. Maybe, he imagines, if he had launched Sénégal Funny, it would have worked.

Struck by how engaged Maroc Insolite’s users were, and trying to build out the community as much as possible, Lagouche decided to try something new: an in-app messaging system, now used by 15,000 users per day.

In Lagouche’s mind, European companies settled in Morocco have been detrimental to the country, depriving developers from specializing, and giving them short-term projects at low salaries, which he believes makes it difficult for them to care much about quality.

This is especially problematic for apps. Because there will always be users who will forget or refuse to update their apps, it’s important for each version to be as high quality (and bug-free) as possible.

BabDreams has created a total of eight Press apps, two Insolite apps, and is working on a few more ambitious projects. All of these have been developed on multiple operating systems, and monetized through several ad networks. Behind this diversification is a simple idea: don’t put all your eggs in one basket.

This not only has helped the company minimize risk, but has also allowed it to experiment, releasing as many apps as possible with the potential to make it big.